Husband speaks about wife’s death at Elm Manor: “If I didn’t call every day, I wouldn’t have known”

It was 7:30 a.m. on Thursday, May 21st when Harold Perryman of Shortsville called Elm Manor Rehabilitation and Nursing Center in Canandaigua.

Each morning he would call-in to wish his wife Beatrice, “Bea” good morning as she would start her own day – but that didn’t happen on this particular occasion.

That had never happened before out of all the times he contacted his beloved Bea while at Elm Manor.

As soon as the phoneline dropped, he immediately called back at 7:35 a.m. only to find-that his wife passed, according to the nurses’ station.

“She died at ten-minutes to 8 a.m. and hung-up,” Perryman told FingerLakes1.com.

At the age of 88, Beatrice Perryman was pronounced deceased at 8:05 a.m. from acute respiratory failure, which was caused by contracting COVID-19 according to her death certificate.

But the timing was off, according to Perryman who claimed that the receptionist answered him saying that Bea had only passed at 7:50 a.m. that same morning – 15-minutes ahead of the time when he called back.

Perryman then contacted Fuller Funeral Home in Canandaigua where her body was received sometime at or around 8 a.m.

On the following day, her body was cremated, and her ashes now sit beside his bedroom dresser.

Despite the discrepancies in the time of death between Elm Manor and the death certificate itself, none of that mattered more to Perryman than the fact that he did not know his wife passed. 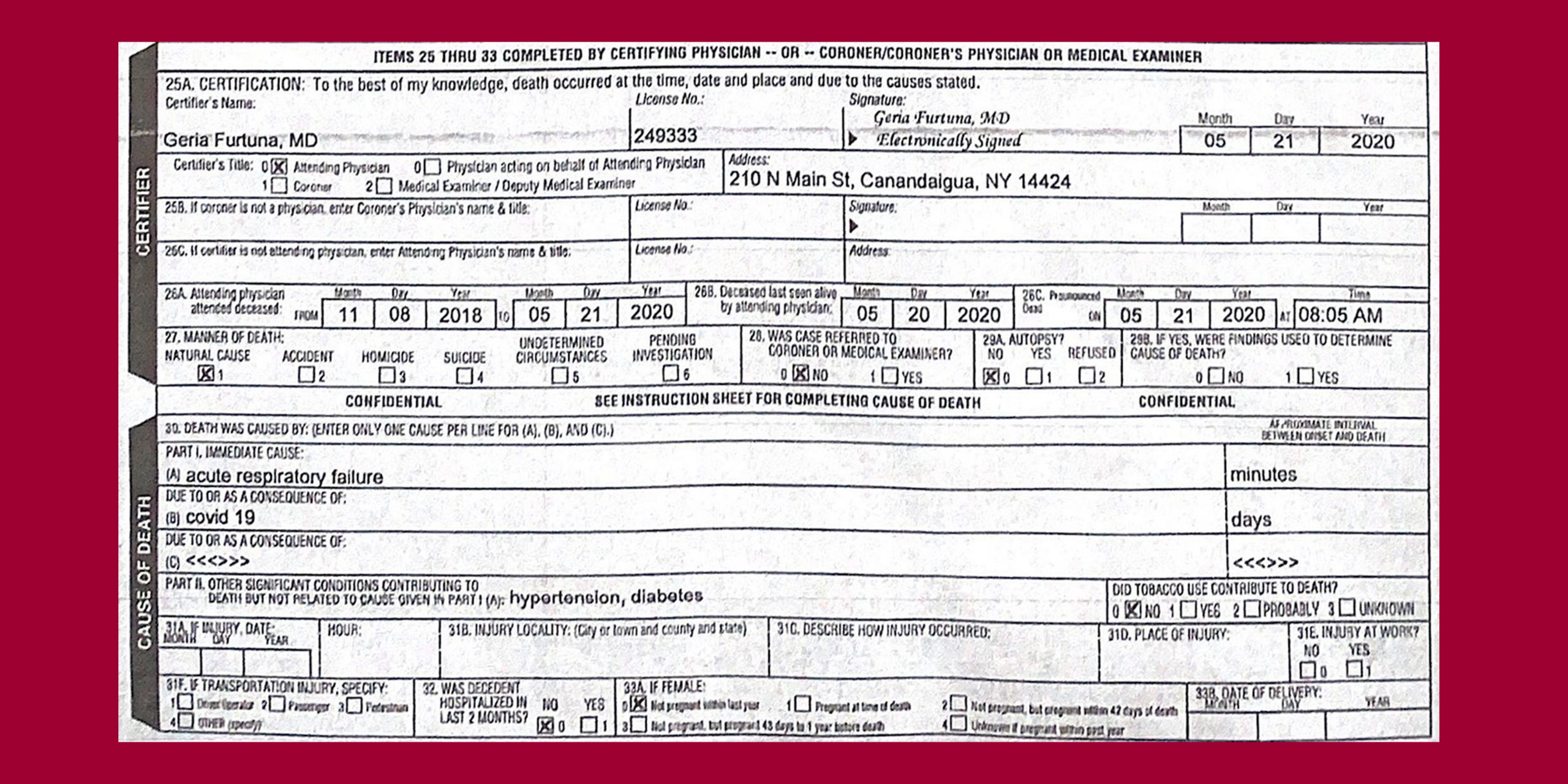 If Perryman did not call her each and every day as the dutiful husband, he had been caring for her since entering matrimony in 1989 – 31 years ago, he simply wouldn’t have known even to this day.

“If I didn’t call my wife every day, I wouldn’t have known,” he explained.

Even after hearing the grim news through his landline from the nurses’ station, Elm Manor has not formally contacted Perryman on their own terms since May 21st.

If this tragic situation was not costly enough emotionally for him – it even became financial too.

When Perryman eventually reached-out to Elm Manor to request for his wife’s medical records, he had been told that accessing copies of those records would come with a price – some $400.

Perryman claims that this cost had not been thoroughly explained to him, and he’s not willing to pay for the documents at this time – not only because he cannot afford it, but his decision is partly out of principle.

But even before contracting COVID-19, Bea had a history of prior health complications.

Her death certificate notes that other health conditions contributed to her death including hypertension and diabetes, which had not been taken seriously by Elm Manor, according to Perryman.

When she entered the nursing home on November 6, 2018, he informed them that she was diabetic and yet the necessary precautions were not accounted for her.

It wasn’t until almost a month before her death during April of 2020 when it seemed to Perryman that the staff were finally addressing her serious diabetic health needs that were well-documented throughout her stay at their facility.

At one point, Bea entered a sugar coma and did not receive the proper medical treatment, as told by Perryman.

He also alleges that Elm Manor medical providers only offered her Tylenol and Aspirin to combat her worsening respiratory issues caused by COVID-19 after she called him on numerous occasions, claiming that she could not breathe – and that whenever she rang her bell to request assistance, the staff would not come.

But the abuses didn’t stop there according to Jen Sims, a former resident at Elm Manor at one point became Bea’s roommate, sharing a room together around this same time last year.

Sims, who suffers from multiple sclerosis witnessed abuses and pure negligence while residing in Elm Manor after being transferred from UR Thompson Strong Memorial Hospital for rehabilitation services.

Usually Sims would stay in physical therapy for at least two-weeks for each visit she ever had at numerous facilities throughout the Finger Lakes – but as soon as she entered Elm Manor, that became a different story for her.

Instead, Sims claimed that staff at Elm Manor did not grant her permission to begin rehab care because she allegedly did not qualify for it – the sole reason she moved to their rehab facility in the first place.

Eventually Sims was released after three short days after protesting her stay, which felt like a lifetime to her while inside.

One evening, Sims alleges that she witnessed an aide strike Bea, Perryman’s wife in an effort to have her fall asleep early – allowing another aide to check-out early to attend a party.

At that time, Sims did not file any formal complaints with the state’s nursing home complaint hotline or the Department of Health, saying that the situation felt surreal and too traumatic for her to recount to the proper officials at that time.

After her release, Sims remained close to Bea and her husband, considering the former a friend until her recent passing in late May, which inspired Sims to break her silence – even telling Perryman about that night, who also had no prior knowledge about the alleged incident.

“I never knew about it,” Perryman shared.

Although the wounds from this unforeseen death are still fresh to Perryman, he could not idly sit by and let his wife’s death remain in vain.

He wants answers from Elm Manor, and ultimately justice.

“I’m going to file for negligence against my wife because she was sick and they did nothing for her,” Perryman shared.

Brown Chiari Attorneys injury law firm located in Buffalo are prepping to represent Perryman in a legal suit against Elm Manor Nursing and Rehabilitation Center, aiming to fight in the honor of her memory by pressing negligence charges upon the facility, its staff, management, and owners.

“That place should be closed. They don’t care about you,” he said.

Speaking from his own personal experiences, Perryman insists that if anyone seeks to place a family member or loved-one inside Elm Manor, he strongly urges them to reconsider after his wife passed from COVID-19 and never notified about it.

At the time of this story, Elm Manor Rehabilitation and Nursing Center accounts for 18 COVID-19 related deaths countywide, according to the Ontario County Public Health office data reporting from Monday, June 8th – from nearly a month ago. 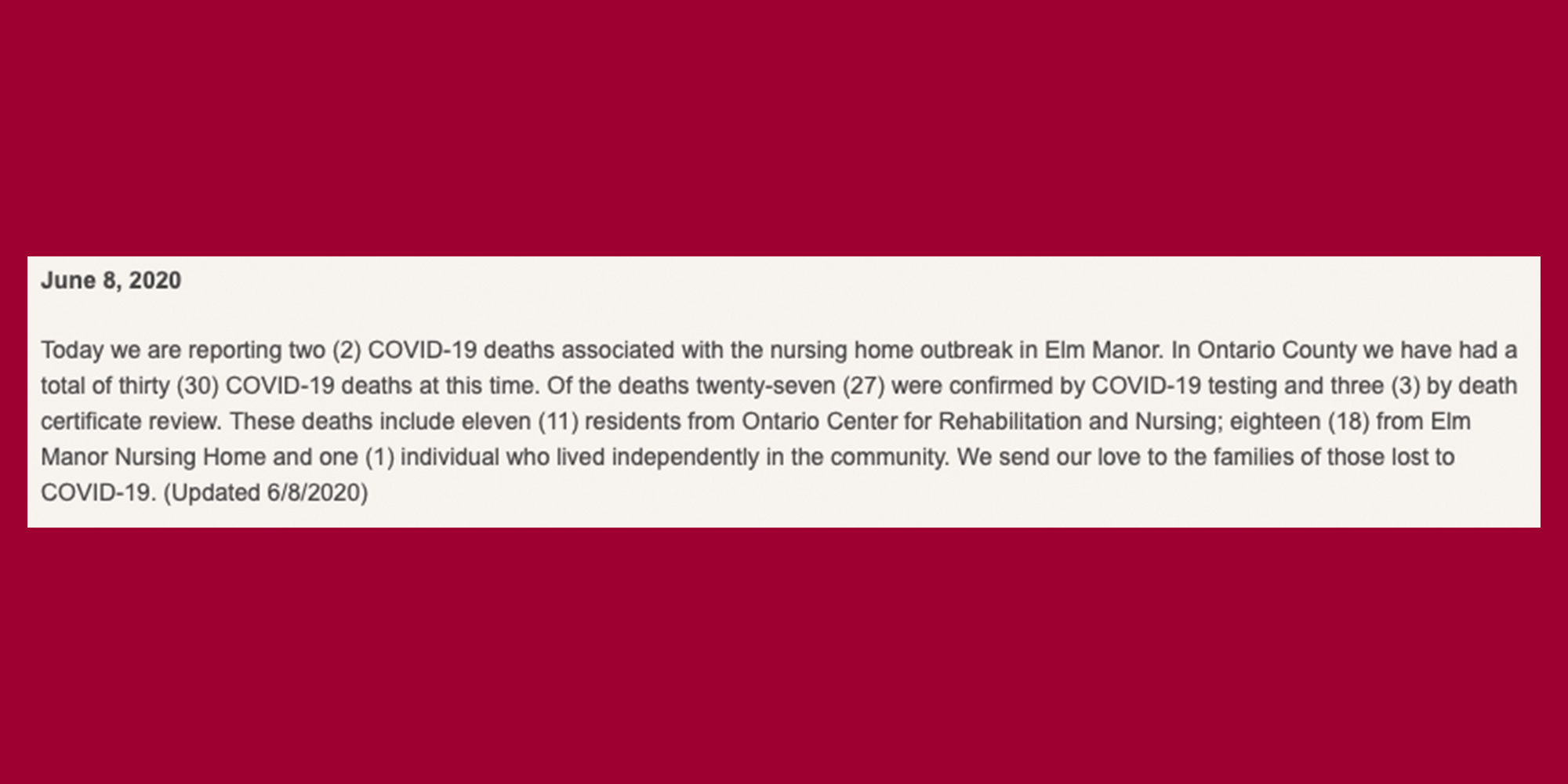 Based on the latest daily report from their website, 29 deaths occurred between Elm Manor and Ontario Center for Rehabilitation and Healthcare within the two nursing home facilities at the county level.

However, there are seismic discrepancies with this current real-time death count between the information presented by Ontario County and the Department of Health’s reported figures.

As of July 5th, the state’s DOH nursing home death spreadsheet suggests that only 13 deaths were COVID-19 confirmed with one other unconfirmed case to be considered as a death caused by the virus at Elm Manor – instead of the 18 reported deaths by the county as of the dated June 8th update.

Additionally, the Department of Health has only tracked four COVID-19 confirmed deaths at Ontario Center and no other possible, which starkly contrasts the 11 reported deaths by the Ontario County Public Health office from that same daily update back in June.