Editor’s Note: This reporting originally appeared in The Herald. Check out their work here at this link.

Vice President of Campus Life Robert Flowers has since assembled a group of faculty, staff and students called the Alcohol and Drug Abuse Prevention team.

Chaired by Assistant Vice President and Dean of Student Engagement & Conduct Brandon B. Barile, he is accompanied by Hannah Smith, Residential Education assistant director who brings a background in drug prevention to the table with her previous work at the College at Brockport, SUNY. 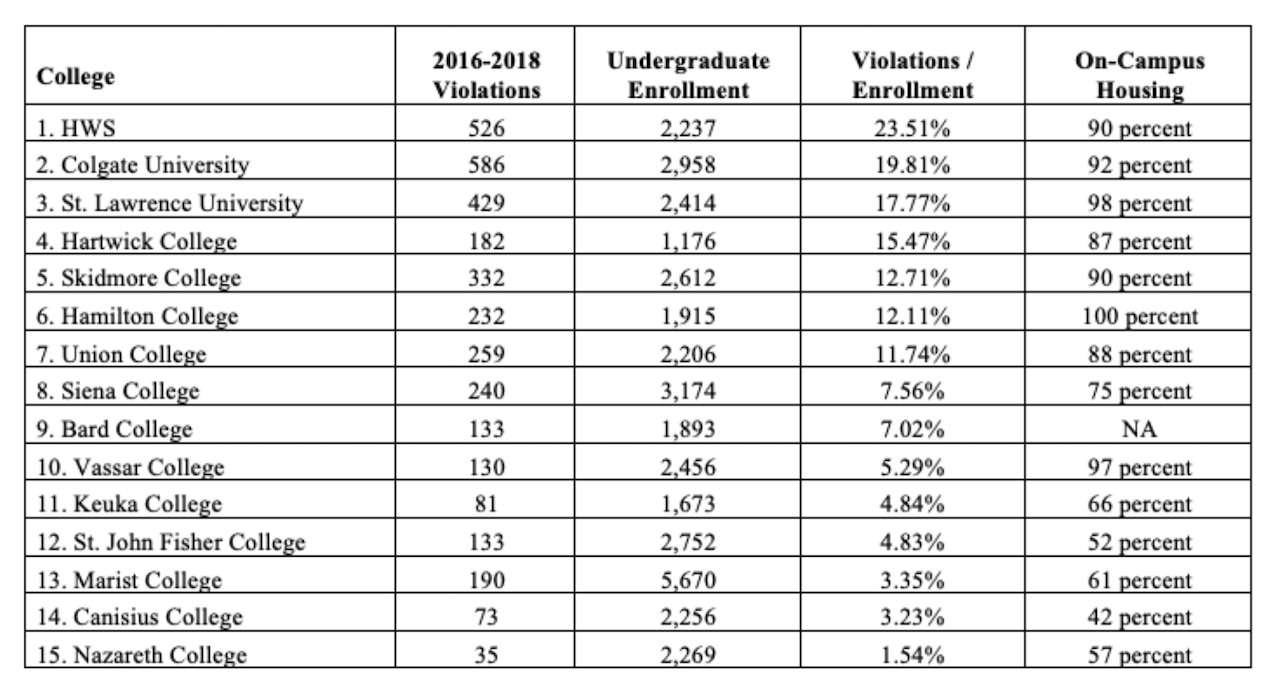 HWS ranks first among similar private liberal arts colleges in the total number of drug abuse violations from 2016-18, as to the percentage of their undergraduate enrollment.

Additionally, Brandi Ferrara, the director of the Salisbury Center for Career Services;  Campus Safety Officer John Hillenbrand; Amy Willower, a nurse at the Hubbs Health Center as well as the Office of Intercultural Affairs Associate Director Renee Grant were all selected to serve on the team.

Students Joshua Marek ‘22, Ryan Klimkewicz ‘20 as well as Grace Hammett ‘20, the founder of Addicted_HWS, an Instagram page dedicated to addressing the issues of drug addiction on-campus join the aforementioned faculty and staff.

Flowers shared that Associate Professor of Sociology Jim Sutton has willingly offered to assist the group as a faculty member.

A FLACRA representative has been also appointed to serve as an adviser to the team.

Commissioned at the end of the fall semester, the team has already met multiple times and aims at collaborating between on-campus and off-campus resources to better support the needs of the student population.

“They’ve actually come up with a lot of really good ideas,” Flowers told The Herald.

The Colleges administration has set forth a major agenda, one which will require all resident assistants to undergo Narcan training.

Trained resident assistants shall gain access to nasal dosages that will be carried on-duty while conducting their evening rounds.

Jeremy Cushman, a member of the Board of Trustees and physician at the University of Rochester Medical Center who specializes as an expert in emergency medicine is managing the Colleges’ implementation of Narcan training for select students.

As the supervising clinician for the Monroe County and HWS EMT programs, Cushman has overseen the training of three students in administering Narcan, who will then train resident assistants campus wide.

“We’re going to train all of the RAs. I’m going to ask all of my own on-call staff to be trained as folks who can administer Narcan and then provide Narcan to all of those folks,” Flowers stated.

“What we’ve had is some of them trained to be able to now train others to administer Narcan and that will vastly widen our growth,” he continued.

As of last May, Marty Corbett, Director of Campus Safety, announced that Narcan became accessible across the entire campus.

Every AED station and Stop the Bleed kit has Narcan available.

Additionally, each campus safety officer carry sprays on-hand to treat others and even themselves due to looming threat of accidental exposure, which has cost the lives of responding law enforcement officers nationwide.

Aside from solely offering advice to the prevention team, FLACRA will be an active agent moving forward when mitigating and responding to drug abuse issues on-campus.

“We also have asked FLACRA and they’ve agreed to have to start to offer some of their services on campus,” Flowers said.

FLACRA, also known as the Finger Lakes Area Counseling & Recovery Agency was founded in 1973 as a private non-profit agency that assists individuals who suffer from substance abuse and other health-related disorders.

Flowers explained that while students participated in FLACRA group services in the past there have been challenges since their programming is off campus, which further exasperates travel and transportation issues.

As a result, a counselor from FLACRA is expected visit the campus one day each week to speak directly with students about substance abuse related issues.

Aside from training and new services, Flowers is interested in disseminating information and educational resources through a rotating series of bulletin board displays across campus.

“But the idea is how do we get out information about opioid about alcohol and other drug resources, what’s available on campus,” Flowers said.

After a conversation with an EMT student, Flowers explained that the student suggested for the Colleges to host a hands-only CPR training day sometime during the spring semester for students, faculty and staff, which may also encompass Narcan training as well.

“If this seems appropriate, then we may offer the Narcan training at the same time,” Flowers stated.

Beyond educational programming and training, Flowers asked Director of Campus Safety Marty Corbett and his staff to evaluate whether the Colleges can become certified through the Opioid Overdose Prevention Program, which would allow the institution to obtain a free supply of Narcan through the New York State Department of Health.

In only a matter of a few months following a frightening series of life-threatening overdoses one Sunday morning, the Colleges have assembled a drug abuse prevention team, plan to train resident assistants in administering Narcan and carrying dosages while on-duty, guarantee a weekly visit from a FLACRA counselor as well as expand the accessibility and visibility of educational resources for students, faculty and staff alike.

While the Colleges have made major strides in enhancing preventative institutional measures when handling future overdoses on-campus, Flowers still sees plenty of room for improvement when it comes to considering the best practices and procedures to implement as vice president for campus life.

“So, we’ve done a lot in the last few months or a few weeks, really, but certainly, you know, always still looking for other ways and trying to be part of best practices,” he concluded.

‘Snowbart’ just a nickname or something more?

In a previous conversation with The Herald following three non-fatal cocaine overdoses that happened on-campus last November, Vice President of Campus Life Robert Flowers dismissed Hobart’s unofficial nickname in ‘Snowbart,’ characterizing it as a “misnomer” and that “our data is normative with other northeast private colleges.”

Comparatively, the Colleges top the chart by ranking first among similar private liberal arts colleges in the total number of drug abuse violations from 2016 to 2018 as a percentage of their undergraduate enrollment.

As a means to draw comparisons, The Herald explored the rate of drug abuse violations among similar four-year private liberal arts colleges throughout New York state.

In total, The Herald assessed the drug abuse violation rates that were referred for disciplinary action across 15 liberal arts colleges based on the recorded data from the annual security and fire safety reports that are published by each institution in accordance with the Clery Act.

The report classifies drug abuse violations as “the violation of laws prohibiting the production, distribution and/or use of certain controlled substances and the equipment or devices utilized in their preparation and/or use. The unlawful cultivation, manufacture, distribution, sale, purchase, use, possession, transportation or importation of any controlled drug or narcotic substance. Arrests for violations of state and local laws, specifically those relating to the unlawful possession, sale, use, growing, manufacture, and making of narcotic drugs.”

Since the 2019 academic year information is being currently compiled, the data sequestered in this investigation dates the drug abuse violations from 2016 to 2018.

Consequently, the tables below account for reported drug abuse violations during those years.

Additionally, the report distinguishes between drug versus alcohol abuse violations in order to not skew or misrepresent the presented figures.

Below lies a table that ranks the 15 institutions based on the total number of drug abuse violations that were referred for disciplinary action and reported from 2016 to 2018 as a percentage of the undergraduate enrollment.

The table presents figures on the estimated undergraduate enrollment as well as the percentage of students that utilize on-campus housing, both of which were collected from U.S. News & World Report.

In 2016, 144 drug abuse violations were reported on-campus of which 131 occurred within residential facilities at the Colleges.

In 2017, the number of drug abuse violations significantly increased to 203 campus wide with 181 incidents transpiring inside residential facilities.

In 2018, the campus drug abuse rate declined to 179 violations and 162 offenses within residential facilities.

In total, 526 violations occurred campus wide at the Colleges over the span of three years from 2016 to 2018.

Unfortunately, the Clery Act does not distinguish the data to determine the unique number of incidents among the student population, meaning that the Colleges’ 526 violations statistic can contain repeat offenders.

While Hobart has been dubbed as ‘Snowbart’ for its reputation as a campus where cocaine consumption is popular, the data also does not directly specify as to what narcotics or drugs were being purchased, consumed, possessed, distributed or sold at Colleges or any other institution for that matter.

Although the Colleges has the highest number of drug abuse violations as a represented percentage of the student population, other factors contribute to how this data may be manipulated due to an underreporting of violations at other institutions.

Additionally, considering the percentage of students who reside on-campus directly impacts the total number of reported violations by campus safety personnel, especially when off-campus housing does not fall under their jurisdiction.

Perhaps the moniker of ‘Snowbart’ is much more than a myth relating to Geneva’s high snowfall percentiles.

Rather, the nickname may persist more prominently due to the number drug abuse violation rates that are running rampant on-campus in comparison to competing institutions, as the compiled Clery Act data clearly suggests.

Gabriel Pietrorazio is a senior at Hobart and William Smith Colleges. He’s written for the Town Times of Watertown, Connecticut Times, Finger Lakes Times, and current serves as reporter for FL1 News. Feedback, tips, and story ideas can be sent to [email protected].