The trophy is back where it belongs for the seventh-straight season after No. 3 Syracuse (4-0) successfully retained the Kraus-Simmons trophy by defeating Hobart (3-1), 21-13. Career days from Tucker Dordevic (5-2) and Brendan Curry (5-1) in the first midfield propelled the Orange offense to its second 21-goal output on the year and secures a five-goal game from every member of the top midfield in the last-two outings. The success brought the trophy home for the 32nd time in the 35 years it has been awarded.

For nearly five minutes, Hobart and Syracuse kept pressuring each other’s goalies until the Orange captured their sixteenth goal of the evening at 10:54.

Hobart rallies back in 34 seconds to secure the Statesmen’s twelfth goal with 10:20 minutes left in the quarter.

Syracuse answer back scoring a seventeenth goal against the Statesmen at 7:36 and securing a staggering 17-12 lead.

In a ten second turnaround, Hobart strikes back earning their thirteenth goal of the evening at 7:26.

The Orange return fire with their eighteenth goal on net at 5:01.

Syracuse scores yet again at 3:03, growing their commanding lead with at 19-13.

The Orange continue their unanswered goal streak by earning a twentieth goal with 2:31 minutes left in the quarter.

The Syracuse lineup strings together the final goal of the game at 1:37 to defeat Hobart with a final team score of 21-13.

Syracuse closes the game with 48 shots on net and 21 goals while Hobart ended  with 40 shots and 13 converted goals.

In the first 48 seconds of the quarter, Hobart ties the game 7-7 with their seventh goal.

Syracuse sounds back with an eighth goal with 12:57 minutes left.

The Orange score yet another unanswered goal with 12:02 on the clock, bringing Syracuse to a 9-7 lead.

The Statesmen retaliate to score their eighth goal on net with 10:18 minutes left.

Syracuse sounds-off by earning their tenth goal of the evening with 9:32 minutes on the clock while furthering the gap between them and Hobart.

The Statesmen climb back into the third quarter by securing their ninth goal at 8:13.

The Orange respond within 31 seconds to secure an eleventh goal on net with 7:42 minutes on the clock.

Hobart keeps coming back goal-for-goal against Syracuse after gaining their tenth goal in just 36 seconds with 7:06 minutes left in the third quarter.

Syracuse rallies back to secure a twelfth goal at 5:42.

The Statesmen retaliate earning an eleventh goal with 4:26 minutes on the clock.

Syracuse answers back with a thirteenth goal in 23 seconds at 4:03.

The Orange continue scoring unanswered goals with their fourteenth on net and 2:48 minutes left in the quarter.

Syracuse secures their third consecutive unanswered goal with only 58 seconds left on the clock while fortifying their heavy 15-11 lead.

At the end of the third quarter, Syracuse regains an impressive 15-11 lead against Hobart.

Starting-off the second quarter, Hobart sounds back with their third goal of the night within the first two minutes from the face-off.

The Orange rally back to secure their fifth goal on net within a minute.

The Statesmen sound-off by earning a fourth goal at 11:56 minutes left.

Syracuse secures their sixth goal at 6:20.

The Orange continue mounting goals against the Statesmen with their seventh goal of the evening with 3:35 minutes on the clock.

Eric Holden of Hobart rallies back with two consecutive goals within the last minute of the quarter.

At the end of the second quarter, Hobart executed 23 shots on net with six converting into goals while Syracuse attempted 23 shots, earning seven goals.

Syracuse saddles a slim lead of 7-6 against Hobart by halftime.

After a back-and-forth battle between the Orange and Statesmen for possession, Syracuse scored three unanswered goals against Hobart before the 8 minute mark.

The Statesmen rallied to earn two goals to settle a 2-3 deficit within the matter of a minute.

The Orange bounced back, securing a fourth goal on net.

A historic night in the making on many fronts.

This evening, Hobart College men’s lacrosse shall compete against No. 3 Syracuse University at the Carrier Dome for the Kraus-Simmon Trophy in their 106th showdown starting at 7 p.m.

Facing-off for the Kraus-Simmon Trophy that honors the memories of National Lacrosse Hall of Fame coaches Babe Kraus of Hobart and Syracuse’s Roy Simmons Sr., the Orange seeks to secure the trophy for the seventh consecutive season. 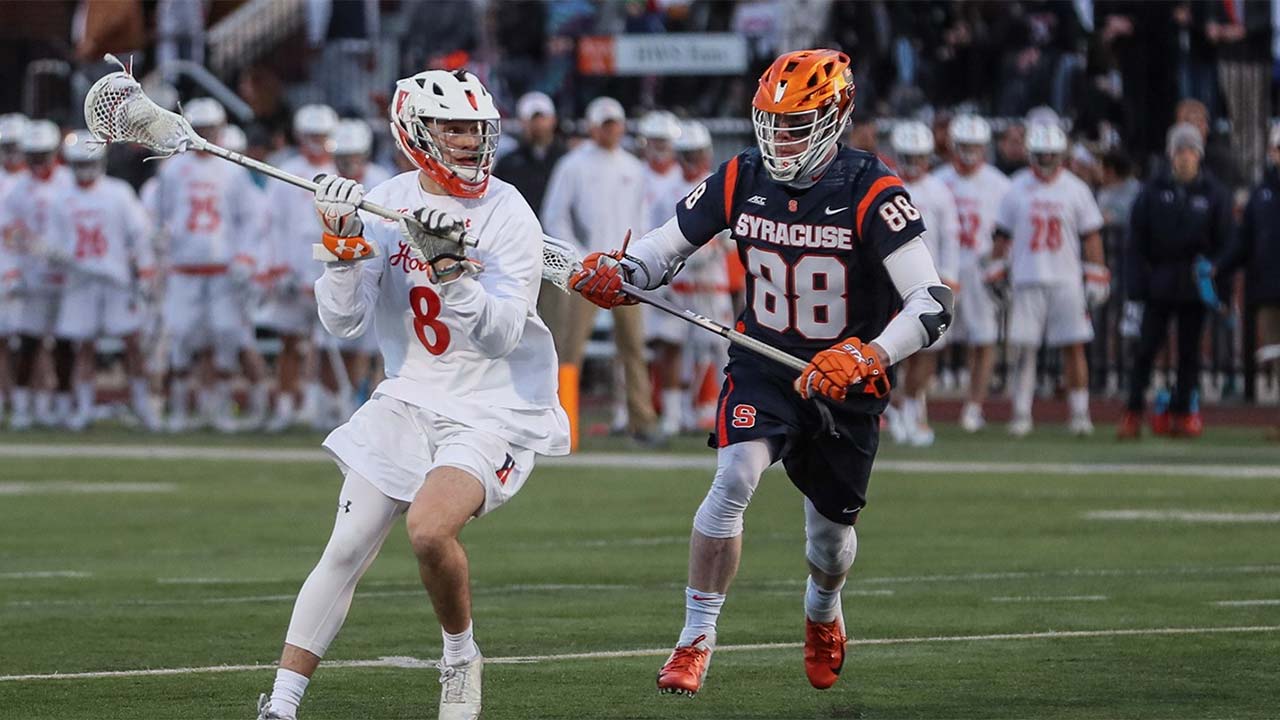 With a well-recorded history, the Statesmen and Orange competed in the first-ever varsity match between the colleges on April 29, 1916.

Over the 33 competitions where the trophy was on the line, Syracuse has won 30 games with a record 20-win streak stretching across nearly two decades from 1987 to 2005.

In contrast, Hobart captured the trophy immediately before and after Syracuse’s hot streak in 1986 and 2006 respectively, as well as their most recent victory in 2013.

The 34th game shall be the last in the Carrier Dome before the nearly 40-year-old facility is closed for more than six months as major renovations are scheduled to start soon after.

During its lacrosse debut, Hobart played the first lacrosse game inside the Carrier Dome on March 21, 1981 when the Statesmen defeated Brown [20-13] in the opener of a doubleheader venue where Syracuse closed the evening with a handled 14-10 victory against the Navy.

With each team touting a 3-0 undefeated record for the 2020 season, both Hobart and Syracuse won all three of their respective home games.

At the Carrier Dome, the Orange crushed Colgate University [21-14], battered Binghamton University [17-4] and edged a shy victory against the seventh ranked team in No. 7 Army West Point with a final score of 9-7.

As for Hobart, the Statesmen bested Canisius College [22-8], subdued Siena College [26-9], and overwhelmed Colgate University [21-13] inside the Thomas B. Poole ’61 and Family Sports Dome.

At the end of the fourth game of the season for both teams, one of these rivals shall win the trophy while the other will lose. 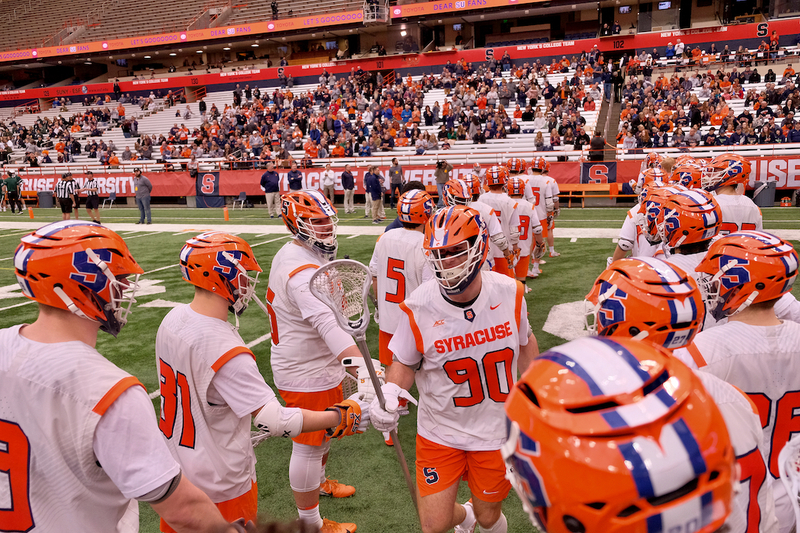 WEOS-FM on 89.5 and 90.3 shall broadcast the game live with Ted Baker from the Finger Lakes Radio Group and David Mapstone, a Hobart College Class of 1993 graduate who played on the collegiate lacrosse team.

The game will also be televised on the ACC Network.

FingerLakes1.com will provide live online game coverage from the Carrier Dome throughout the evening and on Twitter by following @GabePietrorazio.

Last time they played: SU played Hobart at the start of April last season sandwiched between two games against ranked opponents. The Orange had just lost, 13-10, at then-No. 12 Notre Dame and their tournament chances were being threatened. Eric Holden scored his 29th goal of the season to level the scores at five midway through the second quarter. Syracuse wouldn’t give up a goal again. Twelve-straight goals gave the Orange their sixth win of the year and began a four-game winning streak to end the season, including two top-20 wins. Jacob Buttermore and Bradley Voigt had hat tricks in the game last year with Stephen Rehfuss earning a game-high five points. Derrek Madonna and Eric Holden both had three points in the game and returned to Hobart this season.

Over 30 NCAA playoff games hosted under this roof. Last Dome game of the season tomorrow at 7.https://t.co/6BnMTATFM2 pic.twitter.com/tgIIYaagjb

Third oldest rivalry in college lacrosse with a trophy on the line.