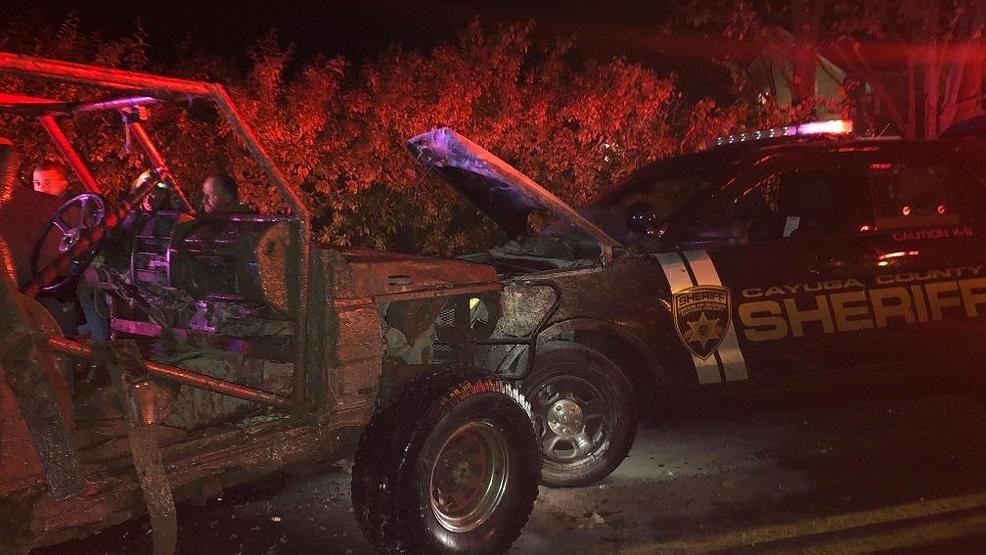 Sheriff Brian Schenck has provided an update on the incident that left a patrol cruiser heavily damaged following the investigation of a domestic incident in the Town of Ledyard.

On Friday around 7:21 p.m. members of the Cayuga County Sheriff’s Office were assisting with State Police at a domestic violence investigation on Levanna Road.

The suspect involved in that investigation had fled the residence where it occurred and was operating an off-road vehicle in the area.

Sgt. Matthew Sloan was stationary on the side of Levanna Road in his marked cruiser when Sheriff Schenck says the suspect, identified as Shawn S. Holmes, 28, of Auburn, approached the cruiser, then swerved – crashing into the police vehicle.

The cruiser suffered heavy front end damage, air bags deployed, and after initial impact – caught fire. Schenck says that Sgt. Sloan was able to quickly get out of the vehicle – along with K-9 Aron – and neither were hurt.

The fire was quickly extinguished, but both vehicles suffered serious damage.

The 28-year-old Auburn resident was not hurt either. However, Schenck says several charges are going to be filed against him.

At this point Holmes has been charged with attempted aggravated assault on a police officer, which is a Class C felony. He was arraigned in Throop Town Court and committed to the Cayuga County Jail on $10,000 cash bail or $20,000 secured bond.

His next appearance is scheduled for October 30th at 6 p.m. in Ledyard Town Court.