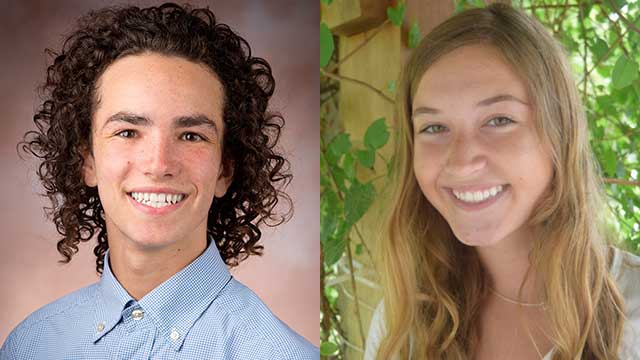 Louis Charles Smith, son of Bernie and Anne Smith has been named the Mynderse Academy Class of 2019 Valedictorian. Louis is a member of the National Honor Society and currently serves as the Vice-President. He is also a member of the Rho Kappa Social Studies Honor Society and the Foreign Language National Honor Society. He has completed coursework in Honors English, FLCC Gemini- Health, Biology, US History and Spanish, RIT’s Principles of Engineering and Introduction to Engineering Design and is currently taking Advanced Placement Calculus and Physics. This year, he is also studying with the BOCES New Visions Medical Careers program at Geneva General Hospital. During his time at Mynderse Academy, Louis has served in several leadership roles including Student Council President, as a student representative to the District Steering Committee, Treasurer for the Junior and Senior Class, Boy’s State Delegate, Teen Institute representative, and as a Rural Schools Association Representative for the Democracy Ready NY Coalition Youth Leadership Initiative. Louis was a team captain for varsity soccer this year and also plays varsity baseball. Louis has served our community as founder of the “Gloves 4 Love” which has provided over 5,000 necessary winter items to those in need. He also has volunteered as a tutor for Algebra and US History, as an Altar Server and Lector at the St. Francis and St. Clare Parish in Waterloo, and as a youth coach at Mynderse Academy Baseball Clinics. He has received the United Way Volunteer of the Year award, the Finger Lakes Scholar Award, the Seneca Falls Police Union Award, The Bausch + Lomb Honorary Science Award, the Teammate of the Year Award, Antonio Varicalli Award, and is a Daughters of the American Revolution – Good Citizen Essay Contest Winner. Louis also won the Rotary District 7120 Oratorical Contest, was the Keynote Speaker for the WFL BOCES Personalized Learning Conference, is a Junior Rotarian and was named Best Delegate at the St. John Fisher Model UN Conference for his work in the Press Corps. Louis plans to attend Syracuse University with an intended major of biology following a pre-medical track with a civic engagement minor.

Jordan Marie Howell, daughter of David and Jill Howell has been named the Mynderse Academy Class of 2019 Salutatorian. Jordan is the President of the National Honor Society and is also a member of the Rho Kappa Social Studies Honor Society. She has completed coursework in Honors English, FLCC- Biology, US History, English and Spanish as well as Cayuga Community College Pre-Calculus and Advanced Placement Calculus. Jordan is also studying with the BOCES New Visions Medical program this year at Geneva General Hospital. During her time here at Mynderse, Jordan has been the Junior and Senior Class Vice-President, and a member of the Drama Club. She has also served as the stage manager for every high school production for the last three years and has served as middle school stage manager since the 7th grade. This year, she also directed the Middle School play, Bad Auditions by Bad Actors. Jordan also has a performing role in this year’s high school musical, Curtains and was awarded Alto One Leader with the Varsity Chorus. Jordan is the Yearbook Treasurer and she is a captain for varsity soccer and lacrosse. She is also a leader in the Friends of Rachel Club. Jordan has served our community by volunteering for the It’s a Wonderful Run, Habitat for Humanity, coaching Mighty Mites Soccer, officiating youth lacrosse and is a member of the Interact Club. Jordan has been awarded George Eastman Young Leaders Award, the Finger Lakes Scholar Award, the Lacrosse Team Award and participated in Girl’s State. Jordan plans to attend Duquesne University in the fall to pursue a course of study in nursing.