It passed a full-vote in State Assembly. That vote was viewed as the one thing that prevented the legislation from being signed into law last year. As time ran out on the legislative session, residents of the Finger Lakes were left asking ‘why’ the measure never made it to a full-vote. 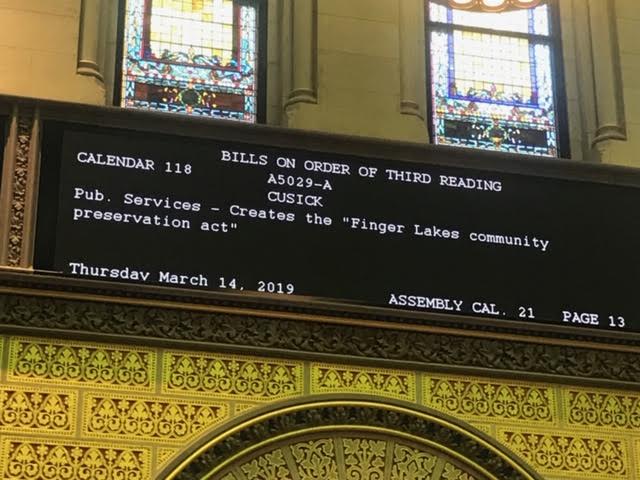 Assembly Minority Leader Brian M. Kolb (R-Canandaigua) and Assemblyman Phil Palmesano (R-Corning) applauded Thursday’s passage of the law they championed that will protect the Finger Lakes region from unwanted pollution and disruption. Sen. Pam Helming (R-Canandaigua) says she’s now waiting for the Senate to take up a vote on the bill, which will mean it’s following step would be the Governor’s desk.

The bill prohibits the state from allowing the construction and operation of a trash incinerator facility within the Finger Lakes Watershed. A proposed incinerator, if constructed, would emit lead, dioxins, mercury and other pollutants into the air in addition to putting ancillary strains on the environment like increased traffic, carbon emissions, noise pollution and other hazards.

The proposed location for the incinerator, the Seneca Army Depot, was in close proximity to the Romulus K-12 public school. Without this bill, the project’s developers could have continued to search for an “end-around” of traditional home rule zoning restrictions that prohibited its construction. The legislation (A.5029-A, Cusick) was co-sponsored by Kolb and Palmesano, and passed the Assembly without objection. It now awaits approval in the Senate.

“The effort to pass the Finger Lakes Community Preservation Act came from a place of bipartisan cooperation, collaboration among stakeholders and an unwavering commitment to our community. I am proud to have been a part of this incredible success story,” said Leader Kolb. “Protecting the natural resources that drive the Finger Lakes region is critical to sustaining our economic growth. Our small business, viticulture and hospitality sectors rely on a high quality of life for residents and visitors alike. This bill protects the health of our natural landscape and the future vitality of the Finger Lakes region.”

Assemblyman Palmesano thanked all those who helped push the bill into law.

“I want to thank Assembly Committee on Energy Chairman Michael Cusick and all those who stood tall in the face of this misguided proposal for their incredible support and advocacy to protect our region. I especially want to thank the members of the community, who voiced their frustrations so passionately and articulately, for their hard work on this important piece of legislation,” said Palmesano. “This law will go a long way toward ensuring the natural resources and beauty of our community are protected for generations.”

“Passage of this bill represents a tremendous victory for the Finger Lakes region,” said Joseph Campbell, President of Seneca Lake Guardian. “We applaud all of our elected officials who worked so hard to protect the residents and businesses that rely on a pristine environment for our health and livelihood. A giant garbage-burning incinerator has no place here. We urge Governor Cuomo to sign the bill into law as soon as it lands on his desk, fulfilling his pledge to oppose the incinerator.”

“Ever since this project first came before the Romulus Planning Board, I have worked with local residents, environmental advocates, and business owners to craft this legislation and gain support for it. It’s passage today by the Assembly gets us one step closer to getting it signed into law,” Helming said in a statement on Thursday. “The Finger Lakes Community Preservation Act, as the legislation is known, supports residents and business owners who are fearful of the impact this project would have on public health, the environment, their businesses, and the value of their property. Most importantly, it protects the children of Romulus who ​could be forced to go to school next to a smokestack releasing who knows what. It is important that we continue working together to move this legislation forward and protect our community​.”

The measure will now go before the Senate for a full-vote, then once passed – will go to Governor Andrew Cuomo’s desk to be signed into law. ​