After more than 20 years of service to Brutus’ town court, Judge Robert Hook celebrated his retirement from the bench last weekend. 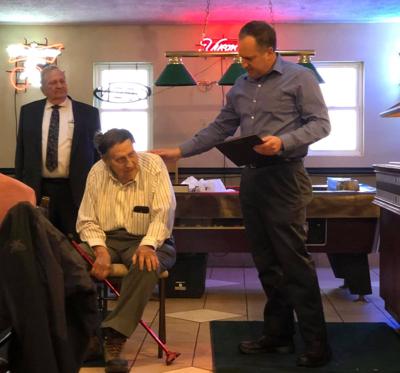 Hook said it was while he was an Auburn City Court bailiff that Judge James G. Cuddy talked him into running for Brutus judge. Hook then became Brutus’ court judge from 1996 through Jan. 18 of this year.

“One of the things I think is best is if you can help others,” Hook said. “Maybe if I can influence a kid more (to) get in the right directions … that’s satisfying.”

Hook, 84, said he enjoyed helping people and serving as judge, noting that the only reason he gave it up was due to having a heart attack last year.

“It’s time to slow down,” Hook said. “I’m going to have to find something to do,” he added, “I just can’t sit and watch television, that’ll drive me nuts.”

On Saturday, more than 70 people packed Devaney’s Riverside Grill to celebrate Hook’s retirement, said Brutus Clerk Angela Skellington. She described Hook as “a solid person of the community,” and said several people — including Cayuga County Sheriff Brian Schenck and District Attorney Jon Budelmann — spoke and presented Hook with plaques to honor him. Others also shared stories and memories of working with Hook in the village of Weedsport’s police and fire departments.