A new report found counties in upstate New York send the most people to prison per capita.

The Prison Policy Initiative (PPI) and VOCAL-NY released a report this month that provides greater insight into where people incarcerated in New York State prisons come from- and it’s not just from the big cities as one might expect. 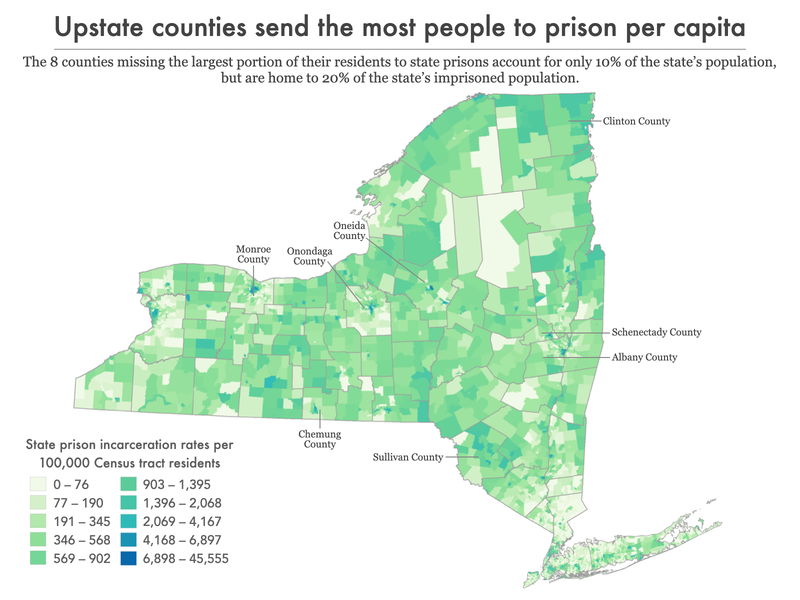 Related: NYS Budget: What to know about changes to state bail reform law

The report uses redistricting data available through a 2010 reform bill, which aimed to end prison gerrymandering. The legislation ensured incarcerated individuals are counted as residents of their home community, not the location in which they are imprisoned.

Using the redistricting data, PPI and VOCAL-NY found that incarcerated people come from all across the state, but disproportionately from specific upstate communities.

The counties with the highest number of residents in state prisons are Albany, Chemung, Clinton, Monroe, Oneida, Onondaga, Schenectady and Sullivan. Six of those counties- barring Clinton and Sullivan- are considered upstate.

The report also found some of the least populous upstate counties- Franklin, Fulton, Genesee, Mongomery and Yates- have some of the highest imprisonment rates in New York.

Related: First 100 marijuana retail licenses to be given to New Yorkers with prior convictions

New York City is the largest city in the state, but it’s imprisonment rate- 185 per 100,000 residents- is lower than some other cities in New York.

The city of Rochester, New York’s fourth most populous city, has an incarceration rate of 1,051 per 100,000 residents- five times that of New York City.

Syracuse, the state’s fifth most populous city, has 864 people in state prison per 100,000 residents. The report says one-quarter of the city’s incarcerated population comes from just four of the city’s 32 neighborhoods.

Additionally, three of the four neighborhoods with the highest incarceration rates are home to the most Black residents in all of Syracuse. Black people account for less than a third of the city’s population but accounted for 76% of traffic stops and 80% of marijuana-related arrests. 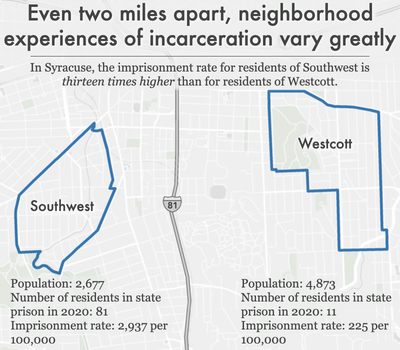 Related: NYS moves ahead with transportation projects in Rochester, Syracuse, Buffalo and the Bronx