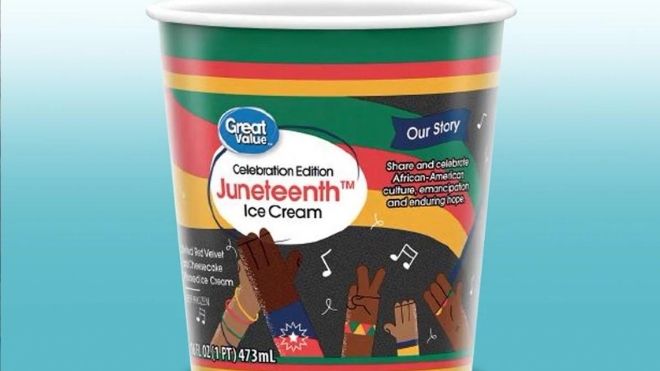 After some serious backlash, they have removed it from the shelves.

Kanye West has announced a collaboration with McDonald’s

Why is the ice cream being pulled?

After getting backlash, Walmart readily received the feedback, pulled the product and offered an apology. The ice cream is  red velvet and cheesecake swirl. The label read “Share and celebrate African-American culture, emancipation, and enduring hope.” Read more about it here.

People are frustrated with Walmart for profiting off the holiday. There are also accusations that they ripped off the flavor from a popular Black-owned ice cream company.

In addition to the ice cream, they also released a variety of Juneteenth merchandise, like clothes and party décor.

Juneteenth was named a national holiday in 2021. The holiday commemorates when Union soldiers told enslaved Black people in Galveston, Texas that they were free on June 19, 1865.

This date was two months after the Confederacy had surrendered. June 19, 1865 was also 2.5 years after the Emancipation Proclamation freed all enslaved people in Sothern states.

Juneteenth isn’t a new holiday. In Galveston, it has been celebrated since annually since the announcement. Texas has developed their own traditions to celebrate this holiday.

Arby’s is launching their first ever burger: when to get it