Ever wonder why there was a Lafayette Inn in Geneva and how Lafayette Park in Waterloo got its name? The names came from the visit of the Marquis de Lafayette to those sites on June 8, 1825. 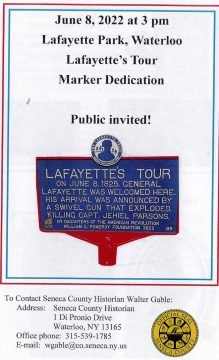 From July 1824 to September 1825, the Marquis de Lafayette, the famous French General of the Revolutionary War and close friend of George Washington, made a triumphal tour of the 24 states that then comprised the United States. He had been invited by U.S. President James Monroe to help instill a renewed Revolutionary War fervor in a new generation of Americans and to help begin the celebration of the United States’ 50th anniversary. The Marquis de Lafayette was in Buffalo on June 4, 1825 and in Rochester on June 7th. On June 8, 1825, Lafayette passed through Canandaigua, Geneva, Waterloo and Seneca Falls on his way to Auburn.

The official Geneva welcoming committee met Lafayette’s traveling group approximately eight miles west of Geneva. Lafayette was riding in a carriage drawn by six horses. Lafayette’s travel party included his son, George Washington Lafayette, his private secretary and two friends. They stopped under a Balsam poplar tree on Bean’s Hill in Geneva, approximately where the Ponderosa Steakhouse is today. It was there that General Lafayette was able to catch his first glimpse of the majestic Seneca Lake. A signal gun’s firing announced Lafayette’s arrival. Nearly a dozen military companies marched to the tree, the light infantry and artillery troops all being in full uniform. It is believed that as many as 2000 people greeted Lafayette. After his reception at the tree, the General visited the house nearby. That house had been built in 1820 and became the Lafayette Inn for many years, until it was destroyed by fire on January 29, 1975.

Lafayette was escorted into Geneva to what is now Pulteney Park. He spoke at exercises on an improvised rostrum. He then dined with approximately 200 distinguished citizens at the New Franklin House.

At 1 pm, Lafayette left Geneva headed to Waterloo. A company of Waterloo cavalrymen under the command of Captain Lemuel W. Ruggles escorted the Lafayette travel party to Waterloo, along with many other Seneca County residents who joined in on horseback or in carriages. Lafayette and his travel party arrived in Waterloo shortly before 2 pm. The welcoming ceremonies in Waterloo were held at the Waterloo House which was located on the northeast corner of Main and Park Streets at the public square. The main entrance to the hotel was in the center of the west side of building, opening into the square. On a balcony of the second story, south of the entrance, was stationed a band of music. The band filled the air with music from the time that the procession came in sight on the west end of Main Street until General Lafayette had left his carriage and entered the hotel.

In the second floor parlors of the hotel, the General received local citizens, including several Revolutionary War veterans. One of these was the Rev. John Caton, whom Lafayette recognized and called him by name. Then General Lafayette went to the Mason Lodge rooms on the top floor where he was given a Masonic ovation and opportunity to rest. Following that the Lafayette travel party re-entered their carriages and set off on their way to Auburn. Lafayette was given a hearty welcome in Seneca Falls, and then crossed the Cayuga Bridge to the village of Cayuga. There a welcoming delegation from Auburn greeted Lafayette and escorted him to Auburn where extensive festivities took place.

It was not until he had left Waterloo that General Lafayette learned of an unfortunate accident that marred his brief visit in Waterloo. An old swivel gun/cannon, which had been taken from a brig used in the African slave trade, had been set up in the public square and was fired periodically throughout that day of June 8th to help entertain the throngs of people who had gathered in Waterloo to greet Lafayette. In an effort to make as much noise as possible while Lafayette was actually arriving in Waterloo, the cannon was filled with a double charge of powder, with flax rammed into the muzzle and that driven in with an axe applied to the rammer. Those responsible for this special loading were afraid to touch off the cannon. They asked Captain Jehiel P. Parsons who happened to come along just then. Ignorant of the loading of the cannon, Captain Parsons quickly agreed and took the burning match and applied it. The cannon burst, and a fragment of it struck Captain Parsons and killed him. When General Lafayette learned about this tragedy, he asked Mr. G. A. Gamage of Auburn to investigate the matter and make a full report. Gamage went to Waterloo and interviewed Captain Parsons’ mother and sisters. Gamage reported to Lafayette that Captain Parsons’ tragic death left a mother, three sisters and a brother without support. On July 20th, from Philadelphia, General Lafayette sent a letter to the mother, along with $1000!

As the centennial of Lafayette’s 1825 visit approached, residents in both Geneva and Waterloo took actions to commemorate this triumphal event. On June 8, 1922, the Seneca Chapter, D.A.R. placed beneath the “Lafayette Tree” on Bean’s Hill a large boulder with a bronze tablet to record the visit of Lafayette. In 1921 the Waterloo Library and Historical Society petitioned to change the name of the public square in Waterloo to Lafayette Park. On January 4, 1922, the name change went into effect. The Seneca Lodge No. 113, F&AM erected a monument in the park to commemorate the visit of Lafayette to Waterloo.

25 mins ago
Prices and temperatures are both on the rise this summer. Here are five tips for saving money on air conditioning ... MORE