The owners of Hollerhorn Distilling in Naples are working to rebuild after a fire earlier this month destroyed a large portion of the facility.

The fire broke out in the early morning hours of May 12. It destroyed the tasting room, dining area and kitchen at the distillery. Since then, the surrounding community has banded together to support owners Karl and Melissa Neubauer on their journey to rebuild. 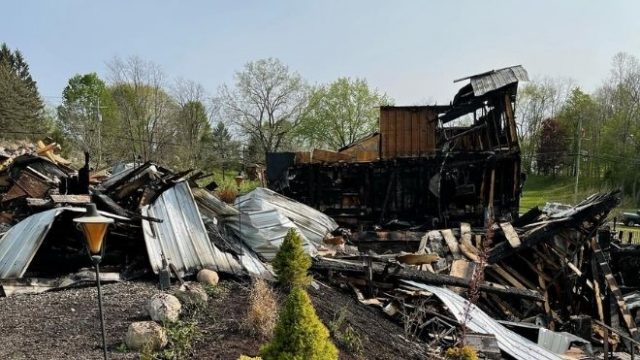 Community support made all the difference

Hollerhorn Distilling is a popular craft beverage maker located at 8443 Spirit Run in Naples. The Neubauers opened the business in 2018. Since then, the distillery has become known for its inventive spirits and liqueurs made from local maple.

“Yes we are definitely coming back,” said Karl Neubauer, according to NYUP.com. “How could we not come back when we’ve seen such generous support from this community since this happened?”

A GoFundMe campaign started by Melissa’s sister has raised over $50,000 in the weeks since the fire. The local craft beverage industry has also extended a helping hand to the Neubauers. Black Button in Rochester offered to let the Neubauers produce spirits at its facility until their own is rebuilt.

Ryan Rector, who lived across the street from the distillery, was the first Naples volunteer firefighter on the scene that May morning. He stayed all day and all night to help the Neubauers. Sadly, Rector was killed the next day in an accident while working a job for the company he owned. He was 27 years old.

Hope to reopen within the year

Neubauer said he’s begun to “pick up the pieces” and hopes to restart production in four to five months. The tasting room may take longer to rebuild, he said, so the Neubauers will consider opening a “satellite” tasting room until the main one is up and running.