An Oregon man attempted to open the emergency exit during his flight. 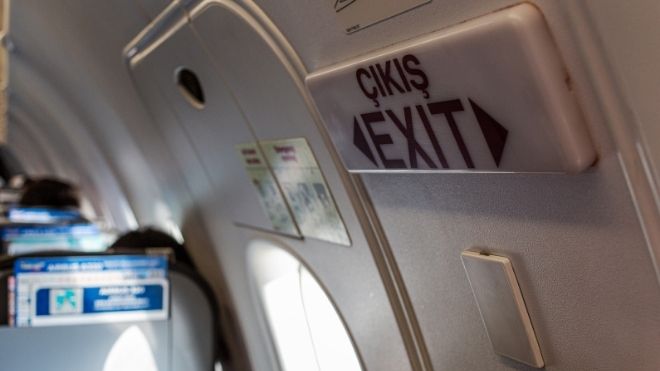 He later admits that it was to share his thoughts on the COVID-19 vaccine.

Michael Brandon Demarre, from Oregon was on a Delta flight from Salt Lake City to Oregon on Feb. 11. Find additional details here.

During his flight, Demarre attempted to open the emergency exit on the plane “with his full body weight.” He even removed the plastic covering on the exit handle.

When a flight attendant told him to stop, he did. He was then directed to the back of the plane. There, he was seated and restrained.

Demarre later told the police that he caused a scene intentionally.  He caused the scene hoping that passengers on the flight would film him. Demarre planned this so that he could share his thoughts on the COVID-19 vaccine.

It is still unclear exactly what thoughts about COVID vaccines that he wanted to share.

He is facing charges of interference and attempted interference with flight crew and attendants. There are no reports that indicate Demarre was on drugs or intoxicated.

This is one incident of COVID-19 related flight disturbances. It has become a trend.

Has this happened before?

Before the pandemic, the Federal Aviation Administration didn’t track unruly passengers because they were so rare.

The FAA has received more than 6,000 reports of unruly behavior in 2021. 4,300 of the reports stemmed from mask requirements.

A survey was conducted by the Association of Flight Attendants. This is a union that represents employees from 17 different airlines. According to the survey, 85% of flight attendants dealt with unruly passengers in 2021. 58% dealt with at least five incidents. 17% were involved in a physical incident.