Performance Lab Caffeine + (formerly called Performance Lab Stim) is a caffeine pill supplement that is designed to help you stay energized and focused.

It contains a blend of ingredients that aim to increase your energy levels, improve your focus, and enhance your mental clarity.

But is it the best option out there? In this review, we analyze everything you need to know about Performance Lab Caffeine +, including its ingredients, effectiveness, value for money and more.

Just be aware that we only publish brutally honest reviews. So, don’t expect to see only positive things mentioned here like the other fake reviews about this product online.

You don’t want to buy a shiny car only to pop the hood when you get home and find that its engine is rusty. Ultimately, no-one likes feeling like an idiot after buying a product – and we’ll help you avoid this in this section of our review.

Here’s the truth: when you ignore the marketing and fancy designs, a supplement is only as effective as its ingredients.

So, let’s remove the make up and see what the natural face underneath looks like.

This is the main ingredient in this supplement (as you can tell by its name). With this in mind, there isn’t a lot of caffeine – only 50mg per serving to be exact.

For someone that drinks coffee on a daily basis, that’s not going to have the best effect; 1 cup of coffee contains 95mg of caffeine and a dosage closer to this is usually what we look for. Especially since you don’t want to take a caffeine pill alongside other caffeinated products.

And let’s be honest, if you suffer from jittery side effects from drinking coffee then you’re going to have the same fate with any caffeine pill unless it contains 10 mg which won’t work for 90% of people.

As a result, do wish that Performance Lab Caffeine + contained 75mg or more caffeine to be truly beneficial for the target audience of caffeine pills.

We don’t mind paying more if we receive a great package that’s worthwhile. But this “underdosed” factor of Performance Lab Caffeine + makes it slightly hard to swallow for $44 per bottle.

L-Theanine is the perfect accompaniment to caffeine, since studies have shown that its able to work in synergy with the stimulant. Here’s a quote from a clinical study conducted by Gail N Owen et al in 2008:

“The L-theanine and caffeine combination improved both speed and accuracy of performance of the attention-switching task at 60 min, and reduced susceptibility to distracting information in the memory task at both 60 min and 90 min. These results replicate previous evidence which suggests that L-theanine and caffeine in combination are beneficial for improving performance on cognitively demanding tasks.”

As we mentioned, we’ll be giving you our honest opinions backed by actual clinical studies (unlike other reviews you’ll find about this product). The good news is that L-Theanine is the perfect addition next to caffeine here, and it’s also included in a 2:1 ratio, meaning there is double the amount of L-Theanine to caffeine which is ideal.

The tl;dr is that there is nothing bad to report on this ingredient.

This review was always going to be a short one, because this is pretty much the last significant ingredient found in Performance Lab Caffeine +.

Remember that this product costs $44 per bottle when taking into account how little ingredients it really contains.

Anyway, back to L-Tyrosine.

This is definitely a great addition to any caffeine pill. L-Tyrosine is known as a nootropic, meaning it’s been proven to help improve your cognition.

More specifically, L-Tyrosine is well known to be beneficial in improve cognition in stressful situations. Making it a great nootropic for high performing individuals, or anyone who wants to perform better at work, college or university.

We’ll mention the inclusion of B Vitamins since there is a relevant reason for it being in Caffeine +. But at the same time, if you take any multivitamin supplement, then you’ll be consuming enough B Vitamins, so bear that in mind.

B Vitamins have been shown to be depleted with caffeine intake due to caffeine’s mild diuretic effect (in plain words, this means caffeine increases urination and can deplete water soluble vitamins including B Vitamins).

But as we’ve mentioned, if you’re taking a multivitamin supplement then this won’t be an issue anyway. That being said, it does make sense for B Vitamins to be included in a caffeine pill, just make sure that it’s not a key reason that you buy one.

We wish it included more nootropic ingredients such as Citicoline

That’s pretty much it when analyzing the ingredients that make up Performance Lab Caffeine +’s formula (supplement facts label).

Being completely honest, for $44 per bottle, we do wish that it offered more. A higher dosage of caffeine, as well as the inclusion of more nootropic ingredients would make this a much more “complete package”.

While Performance Lab Caffeine + is certainly not a bad product, we do believe there are better options on the market. We’ll show you what we believe to be the best caffeine pill on the market is below…

If you’re looking for tons more benefits for just a few dollars extra, then VyvaMind is the best caffeine pill on the market that offers more nootropic benefits.

This is complimented by 150mg of L-Theanine, delivering the perfect 2:1 ratio of L-Theanine and Caffeine for the most benefits to cognition, alertness and more.

But the key differentiator is that VyvaMind also contains 200mg Citicoline, which is arguably one of the most proven nootropic ingredients out there. 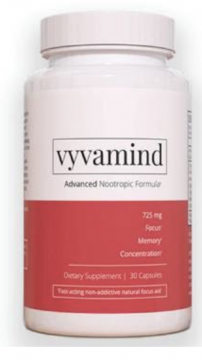 If you’re looking for nootropic ingredients that are clinically proven to work, it doesn’t get much better than Citicoline.

A clinical study conducted by Eri Nazaki et al in 2021 concluded with the statement:

“Dietary supplementation of citicoline for 12 wk improved overall memory performance, especially episodic memory, in healthy older males and females with AAMI. The findings suggest that regular consumption of citicoline may be safe and potentially beneficial against memory loss due to aging.”

In plain english, the above referenced study concluded that Citicoline was able to improve memory – so much so, that it’s being recommended as an aid to counteract memory loss due to aging. And let’s be honest, none of us are getting any younger.

For these reasons, we consider Citicoline as a key addition to any caffeine pill that claims to offer nootropic benefits.

Where to Buy Performance Lab Caffeine +

If you’re one of those people who buys everything from Amazon, I have some terrible news for you… You cannot legally purchase Performance Lab Stim on Amazon or any other third-party merchant.

As a result, you can only buy Performance Lab Caffeine + from their website. Some bad news is that Performance Lab’s site is notoriously bad for having products in stock.

If you find that Performance Lab Caffeine + is out of stock at the time you’re reading this review, then jump to the bottom to see which product we believe is a great alternative.

We feel that we’ve been true to our word by delivering our brutally honest opinions when it comes to this caffeine pill.

That all being said, it’s certainly not the worst product out there. Performance Lab Caffeine +’s ingredients are well chosen, just the dosages aren’t perfect for our personal tastes.

For any coffee addict like us, the 50mg caffeine per serving in Performance Lab Caffeine + just isn’t going to cut it. You could argue that we could take a double serving, but that means we’re getting 15 servings for $44, making it just not financially viable or worthwhile.

It’s for this reason that we believe Vyvamind to be the superior, more complete caffeine pill package – especially if you’re wanting more of an “all-in-one” solution to help you perform better at work, college, or anywhere you need it the most.

The inclusion of Citicoline in VyvaMind (arguably the most beneficial nootropic ingredient at improving your cognition), and higher dosages of all ingredients including caffeine, L-Theanine and L-Tyrosine make it a better value package.

VyvaMind may be a dollar more, but it’s so much more than just a caffeine pill.