Another challenger has entered the primary contest for Rep. John Katie’s seat in the 24th District.

Sarah Klee Hood, an Air Force veteran and working mother, joined the contest marking the second entrance to the primary fight this week. Timothy Ko, a Physicians Assistant in the Syracuse area announced his bid earlier this week.

“I ran for town board because I’m a mom, our sidewalks needed to be fixed, and I’m the type of person who takes action to solve a problem. As I started talking to people, I realized two things: people are frustrated with political inaction and while our country might be divided, here in Central New York, we all walk along the same sidewalks with our kids. We share the same path,” said Sarah Klee Hood. “I’m running for Congress to get back to basics for all of us – to fix sidewalks and roads, our economy and health care. And to repair the foundations in our community that have been crumbling these last few years because of divisive politics.”

Sarah said her mother and father, a nurse and a union electrician, respectively, instilled in her the value of service to country and community. That foundation drove her to join the U.S. Air Force, where she was commissioned as an Airfield Operations officer, a critical role responsible for lives and aircraft. In the Air Force, she earned commendations and promotions for developing innovative solutions and bridging opposition. As a commanding officer, Sarah said she fought against discrimination within the ranks and stood up for her troops.

Following the birth of their second daughter and with her husband deployed to hotspots, Sarah decided to step away from the Air Force to focus on family. After attending a master’s program for nutrition science while in a clinical role at the Phoenix Veterans Administration hospital working on the health of veterans, Sarah and her family moved back to her home of Central New York and settled in DeWitt. She earned an MBA at Syracuse University and worked as a program manager leading a team of engineers to develop and implement software systems to make airports more efficient.

Sarah got involved locally with the civic-oriented program, Leadership Greater Syracuse. She said she loved seeing the direct impact of her work so much that she went to work for a non-profit in economic development with a focus on supporting small businesses in clean technology.

“I’ve spent my career taking action, solving problems, and putting people first in service to our country as an officer in the Air Force and for our community helping people start businesses and create jobs,” Sarah continued. “We’re not getting the action we need from our current representative in Washington. Sounding nice does the people of Central New York no good when you have the wrong priorities. It’s time for a change.”

Find out more about her campaign by clicking here.

For more news on the 24th District click here. 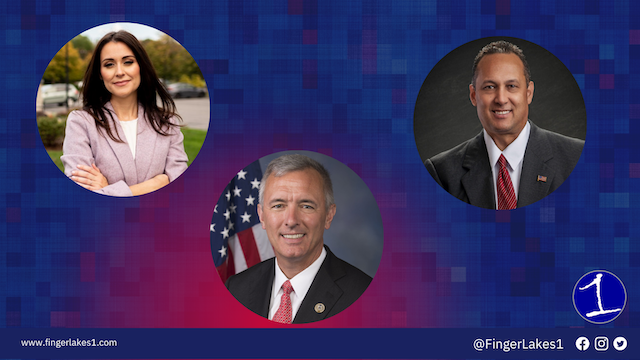 60 mins ago
State police say a Corning woman has died after a crash involving a motorcycle and SUV in Steuben County. According ... MORE

1 hour ago
On Friday around 3:04 p.m. police responded to the rear parking lot of the Ithaca Fire Department for multiple 911 ... MORE

3 hours ago
The Honeoye Falls-Lima Cougars and the Wayne Eagles faced off in the Boys Class C Semifinals at Canandaigua Academy on ... MORE

9 hours ago
Presently, there are a huge number of choices for CBD users. In the beginning, there were only products like pills ... MORE

9 hours ago
Emergency allotments in food stamps have been a life saver for millions of Americans suffering financial hardship since the pandemic ... MORE