Seneca County Attorney Dave Ettman has sent a letter to Attorney General Letitia James, calling for the independent investigation of Charles Bowman’s criminal prosecution in the town of Seneca Falls, after a recent resolution passed the Seneca County Board of Supervisors in mid-October.

Bowman, a Fayette non-Native resident, was charged with two counts of misdemeanor charges by the Seneca Falls Police Department after a grand jury concluded in May regarding a brawl that occurred on Cayuga Nation property on February 29, 2020.

He was detained during the fight by officers of the Cayuga Nation Police Department for nearly an hour and not handed into the custody of local authorities, but rather transported to the Geneva General Hospital to receive urgent medial attention.

Neither the defendant nor his legal counsel has yet to receive any grand jury transcripts or testimonies from that proceeding by District Attorney Mark Sinkiewicz, 119 days and counting after his arraignment.

“Despite calls by local governments and Senator Schumer for a full investigation of the role of Cayuga Nation Police and their jurisdiction, nothing has occurred,” Ettman wrote on behalf of the county in a Nov. 4 letter. “And after the local investigation of any possible crimes occurring during the protest, the Seneca County Grand Jury issued only a misdemeanor indictment against local resident Charles Bowman, not a member of the Cayuga Nation, or any Native American group.”

The letter also details the dire need for “an independent review of all the facts and circumstances” relating to the demolition of Nation-owned properties and brawl in February as well as the interactions between federal, state and local officials, which has “apparently led to only one local prosecution and no action by the Cayuga Indian Nation.”

“There is no negotiating with Halftown”: Seneca County recognizes traditional Gayogo̱hó꞉nǫ sovereignty after Rule 29 passes, resulting in a new letter to BIA

Senate Majority Leader Chuck Schumer called for a federal investigation in the immediate aftermath of the February events by the Department of Justice and U.S. Department of Interior, which seemingly never happened either. 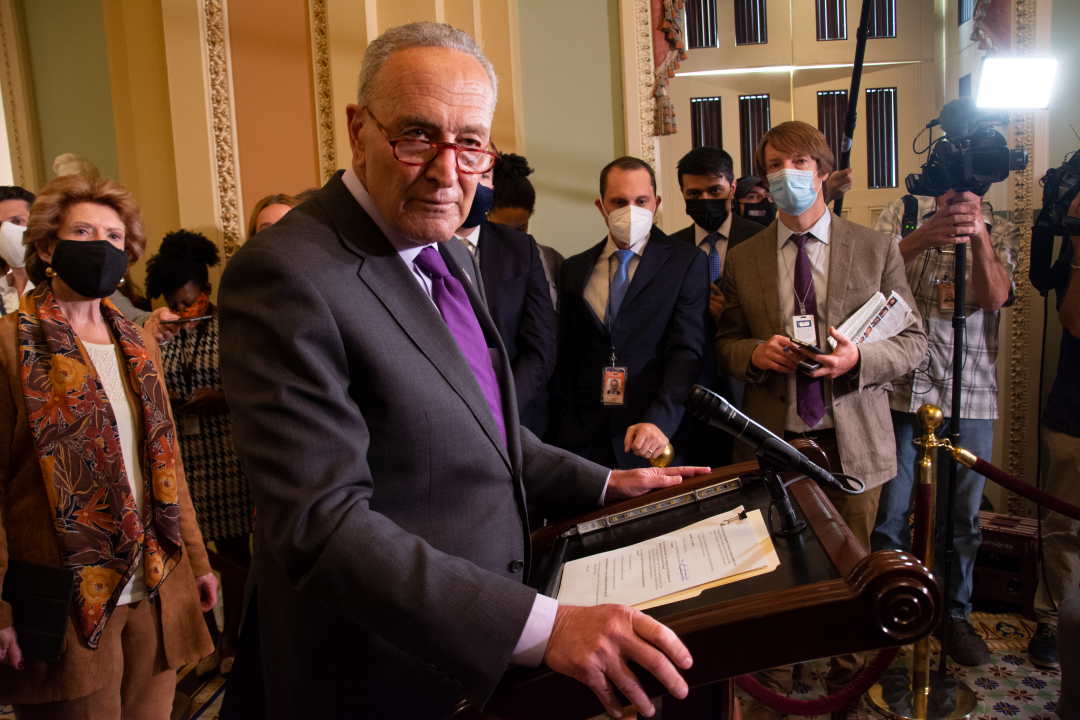 Senate Majority Leader Chuck Schumer speaks to the press at a media scrum inside the Senate Wing at the U.S. Capitol. Credit: Gabriel Pietrorazio, FingerLakes1.com

FingerLakes1.com recently filed a Freedom of Information Act to acquire all records relating to any investigations carried out by the DOJ about the incidents, but the request was denied by the agency’s Civil Rights Division, claiming no such records exist.

A separate FOIA request has been already submitted by FingerLakes1.com to the Office of Tribal Justice, a department that directly reports to the U.S. Attorney General.

After being bounced between three spokespersons within the same federal agency over a period of two weeks, Wyn Hornbuckle, deputy director of the Office of Public Affairs at the DOJ, told FingerLakes1.com on Oct. 25 in an email that their office will “neither confirm nor deny the existence of an investigation” as a matter of policy.

The county’s latest letter, requesting for intervention at the state level has been relayed to Governor Kathy Hochul’s office as well.

In the meantime, Bowman returns to the town court alongside John Alder Stevens, his Ithaca-based criminal defense attorney, on Wednesday, Nov. 17.