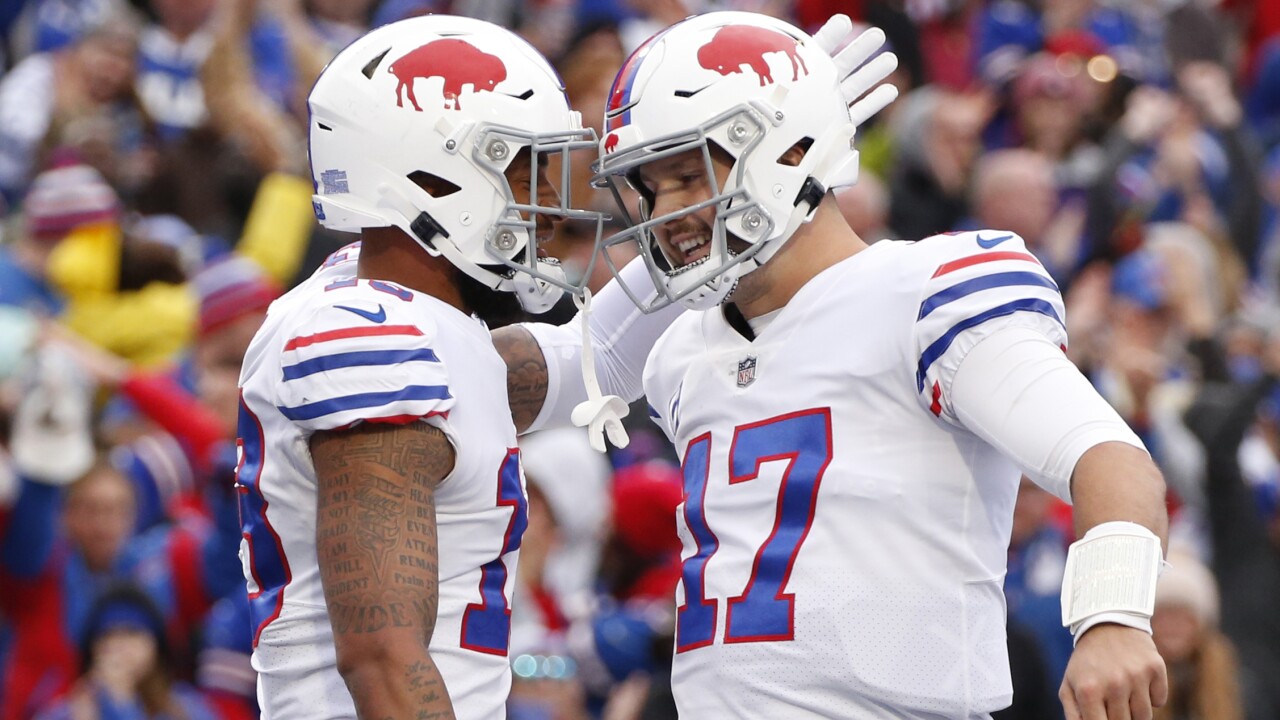 A frightening first half on Halloween put a scare into Bills fans. Buffalo only managed three points and 102 total yards of offense in the first two quarters, and went into halftime tied with the Miami Dolphins, 3-3.

Then in the second half things turned around. Late in the third, the offense began to find its rhythm, as Josh Allen and the Bills marched down the field on a 13-play, 80 yard touchdown drive capped off by a throw from Allen to Gabriel Davis for eight yards. Buffalo’s extra point gave them the 10-3 lead.

After forcing a Miami punt, the Bills went right back to work on their next offensive drive. They went nine plays and 89 yards to the endzone. Allen connected with Stefon Diggs this time, putting Buffalo up 17-3 in the fourth quarter.

Miami was able to score a touchdown of their own and get a two-point conversion to pull within six points, but that’s as close as they would get. The Bills responded with a field goal from Tyler Bass to make it a two-score game again.

Then on the next Miami drive, Buffalo forced a turnover when Jordan Poyer picked off a pass from Tua Tagovailoa. That drive resulted in a touchdown, as Allen put the game on ice with a seven-yard touchdown run.

Josh Allen finished the day with 249 yards passing and two touchdowns. Allen was also the leading rusher with 55 yards on eight carries.

Cole Beasley had his best game of the season. He ended the day with 10 catches and 110 yards.

Buffalo’s victory moves their record to 5-2 and 2-0 in the AFC East.

With his 28th career rushing TD, Josh Allen has tied Cam Newton for the most rushing TDs by a QB in their first 50 starts in NFL history.

Josh Allen has 2+ passing touchdowns in all 8 of his games vs. the Dolphins, making him the first #NFL player to ever do so vs. a single opponent. pic.twitter.com/HcGrfPl849

Not their best day, and they still are going to win. Plenty to clean up but look at the scores around the league today. Weird stuff happens every week.

huge game for this guy pic.twitter.com/MHmX9VzuUG

No Scorigami. That score has happened 2 times before, most recently on November 3, 2019.

Sean McDermott: “Margins are tight in this league, no matter who you play, every week.” Rings even truer today considering the Jets (of all teams) beat the Bengals #BillsMafia pic.twitter.com/TKtvv8LJZs

Josh Mickelson is now at the podium. 😂#MIAvsBUF | #BillsMafia pic.twitter.com/paWAM8KcJw

Josh Allen said @PhilMickelson had a chance to talk to the #Bills during training camp about "finding your zen". Allen also said he doesn't play well when he's "pissed off" or "frustrated" and that's what he felt in the first half against the Dolphins.

Dion Dawkins said halftime adjustment was about getting the offense’s energy up.

“We call it playing with our piss hot.”

Sean McDermott: "Records don't matter so you gotta bring you A game every week."

The Buffalo Bills and Miami Dolphins may play in the same division, but that’s where the similarities end. The Bills sit atop the AFC East at 4-2 and are arguably the best all-around team in football this year, while the Dolphins have sunk to the bottom of their division following a 1-6 start.

Yes, the Dolphins have been even worse than the New York Jets.

Miami has lost six straight games while Buffalo appears to be gearing up for a possible Super Bowl run. The Bills are also coming off a bye week, which makes this road game even more challenging for the Dolphins, who are searching for their first victory since Week 1.