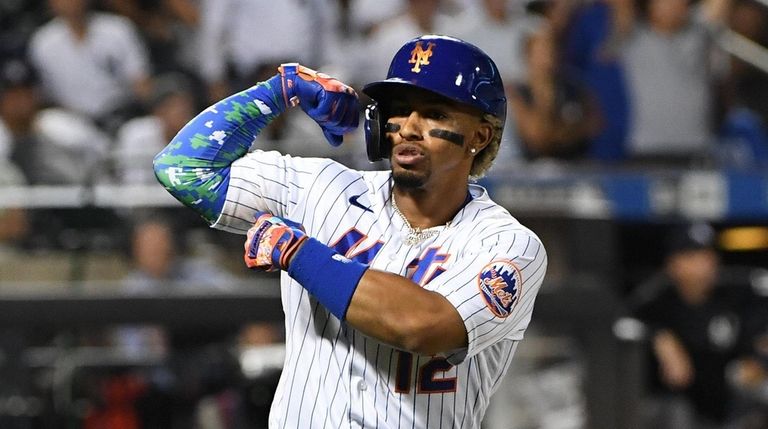 Francisco Lindor pounded his chest as he crossed home plate, his signature game as a Met nearly complete. Lindor had just hit his third home run to give the Mets the lead in the eighth inning on Sunday, powering them to a 7-6 win over the Yankees at Citi Field. More than that, he had given the Mets the last laugh on a night that saw benches clear between rivals.

Lindor capped his first career three-homer game with a go-ahead solo shot off Chad Green in the eighth. He hit another solo homer in the sixth and a three-run blast in the second, becoming the 11th Mets player to record home runs from both sides of the plate in a single game.

The late dramatics occurred only after a benches-clearing incident in the seventh, when Lindor and Yankees outfielder Giancarlo Stanton exchanged words following Stanton’s game-tying homer off Brad Hand. Lindor and his Mets teammates appeared upset at the notion that Yankees players might be whistling from their dugout as a way to relay information about pitches.

Things got SPICY between the Mets and Yankees on Sunday Night Baseball ? pic.twitter.com/kDcCA7IebE

Lindor all but confirmed those rumors when he made a demonstrative whistling gesture toward the Yankees’ dugout following the second of his three homers.

Half an inning later, Stanton came almost to a complete stop as he passed Lindor at shortstop. When Stanton shouted something in Lindor’s direction, both Lindor and Javier Báez opened and closed their hands as if to say: “Keep talking.” Lindor again made a whistling gesture, this time at Stanton, and that’s when both dugouts and bullpens emptied. As they did, Yankees outfielder Brett Gardner flashed a thumbs-down sign at Lindor — a reference to the Mets’ recent scandal in which they openly criticized their own fans.

The Yankees have some history with this sort of incident. In the 2019 American League Championship Series, members of the team reportedly accused Astros players of whistling to relay pitches to their hitters. No punishments were levied at the time, though the Astros later became embroiled in a related sign-stealing scandal.