Largest permanent boost to food stamps ever coming soon: How much will recipients get? USDA says $251 per month

The Supplemental Nutrition Assistance Program, or SNAP has been keeping families fed throughout most of the pandemic. When economic lockdowns struck requests for SNAP benefits skyrocketed as jobless claims did the same. Since December 2020 SNAP recipients have been getting an extra 15% in benefits. Those expire on September 30, which has left some concerned about food insecurity across the U.S.

What happens when 15% SNAP boost ends?

Beginning October 1 a permanent SNAP benefits increase will take effect. It won’t be the 15% that families have been receiving, and advocates say that still isn’t enough – but it will be approximately 7% more compared to pre-pandemic SNAP benefit levels.

Households across the U.S. are still struggling with food insecurity. Surveys of American families over the last 6 months have shown that 7-9% of households sometimes or regularly did not have enough food to eat.

Advocates say this is an unacceptable standard, as millions of children remain hardest hit by this systemic problem.

How much will the SNAP benefit boost be worth?

The average monthly benefit will be $251, according to officials with the USDA. They say that this will combine active emergency boosts to SNAP, as well as the one pushed through in August by the Biden Administration.

The short answer is yes, a few states have moved that direction. Arkansas and Idaho both ended the emergency allotments, which granted households that extra $95 per month for groceries.

Officials in these states didn’t give extensive reasoning for ending the programs, but have criticized extended public benefits across the board – like added unemployment benefits – citing a dwindling workforce in service, hospitality, and manufacturing industries.

When will SNAP benefits go back to pre-pandemic levels?

The USDA forecasts that by 2022 SNAP benefits will fall to an average of $169 per month. Cutting out the nearly $100 of benefits will likely mean a new political fight over the public assistance measure. While wages have increased, cost of living in urban and rural communities across the country has increased significantly.

There have even been concerns raised about the price of goods in grocery stores. If that trend continues, the average allotment of $169 per month compared to the $121 allotted before the pandemic will not be as much of a ‘boost’ as politicians have suggested it would be. 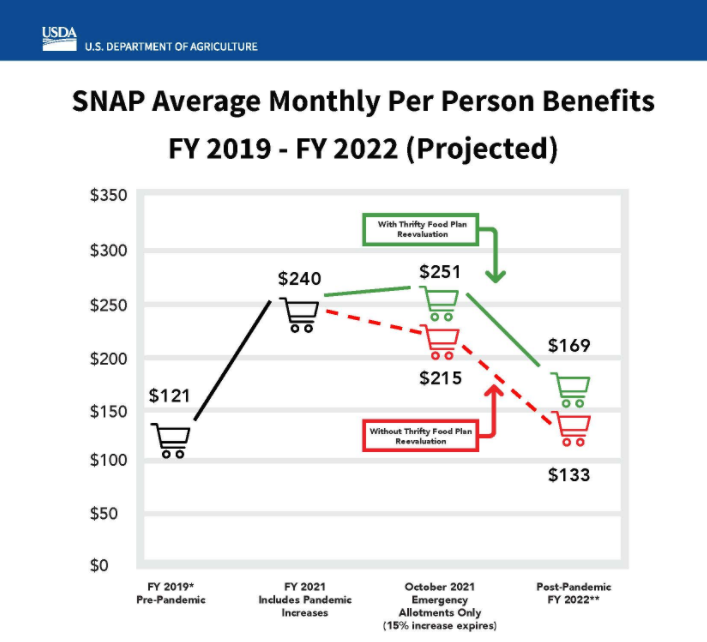