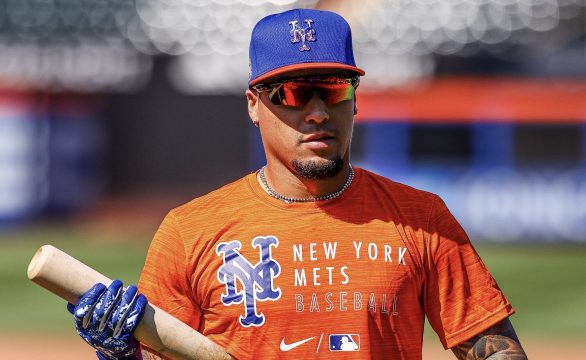 A day after he was traded to the Mets in a deadline deal, Javier Baez has arrived in New York.

Baez, who will wear No. 23, arrived at Citi Field in the early afternoon on Saturday. Before he got in his first swings as part of early batting practice, Baez spoke with manager Luis Rojas in the clubhouse.

Rojas explained what he and Baez spoke about, while also revealing that Baez will hit cleanup and start at shortstop on Saturday night against the Reds.

“As soon as he stepped foot in the clubhouse I met with him. We had a chance to connect immediately and we talked a lot,” Rojas said. “I explained some things to him, where he was going to hit in the lineup potentially tonight and what position he’s going to play. I can share that he’s going to bat cleanup and he’s going to play shortstop.

“Very impressed with his demeanor. He’s very excited to be here, and all he cares about is winning, so he comes right with our mindset. We’re all very excited that he’s here. … He’s definitely a strong presence and it’s good to have him here.”

After taking his swings, Baez spoke to reporters as well, discussing how difficult it was to see the Cubs core pieces being traded away, but also the excitement he feels for his new home in New York.

“A lot of emotions, just the way [Anthony] Rizzo went out and at least the way I grew up in the organization, it was a really big thing for me and my family,” Baez said. “At the same time we obviously understand the business side. We had really good conversation and communication with the front office. It was a surprise thing for my family and for me, abut at the same time, we’re obviously ready to move on and obviously really excited to be here right now.”

The two-time All-Star knows how to win in a big market, as he helped the Cubs hoist the World Series trophy in 2016. And he believes he’ll fit in just fine in the New York spotlight.

“It’s just the way that I play. I play the same way and I’m the same guy every day,” Baez said. “I’m trying to bring that energy to the team, to the clubhouse. Out there, I think there’s just not much to say. I’m just going to be me, go out there and compete and play hard.

Baez is set to become a free agent after this season, but he’s not worried about his long-term future just yet. For now, he’s getting to know his new teammates and hoping to make a run at another World Series title.