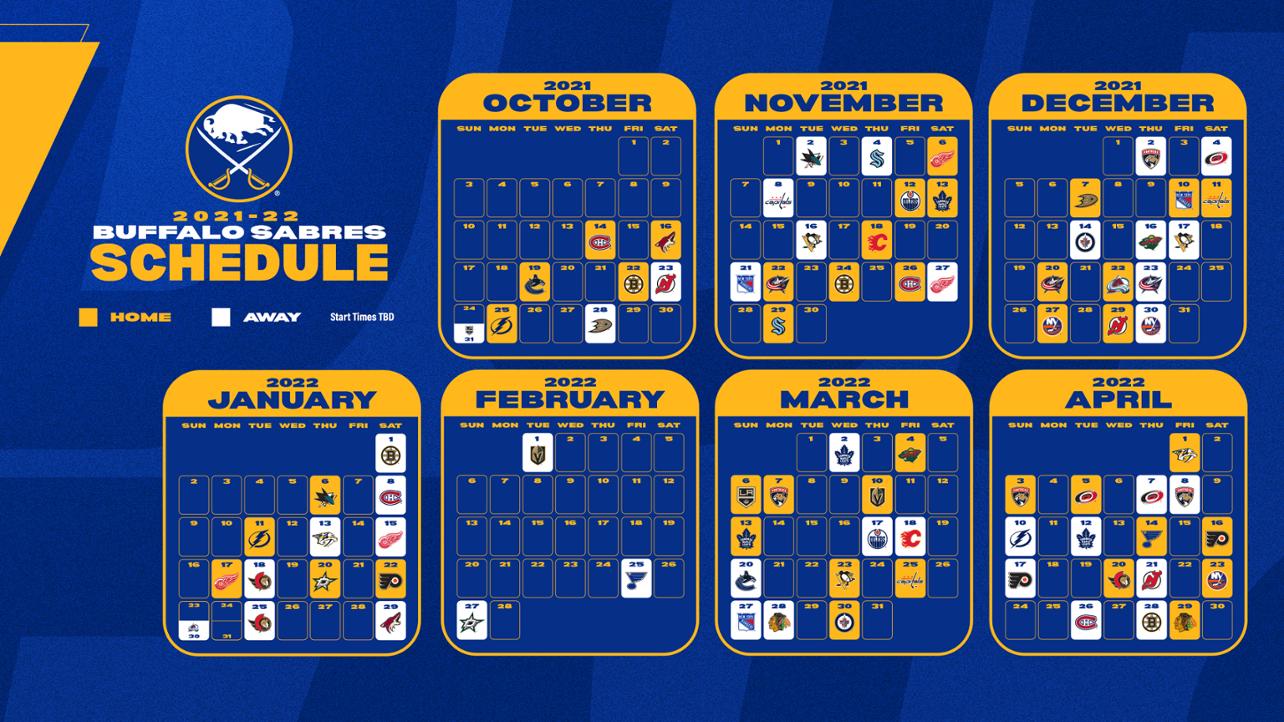 The Buffalo Sabres will open the 2021-22 season at home against the Montreal Canadiens on Thursday, October 14.

The full NHL schedule was revealed Thursday evening during SportsCenter on ESPN. The NHL plans to play a full 82-game schedule beginning October 12 and ending April 29 followed by the Stanley Cup Playoffs wrapping up in June. Start times and broadcast information for each game will be announced at a later date.

The Sabres will face every NHL club at least twice.

Buffalo will open the new season with a four-game homestand at KeyBank Center against Montreal, Arizona, Vancouver and Boston. Five of Buffalo’s first six games will be played at home, capped off with a visit from the back-to-back Stanley Cup champion Tampa Bay Lightning on October 25.

The team will then head out for its first extended road trip, which will begin on October 28 against the Anaheim Ducks. The four-game trip will end with Buffalo’s first-ever contest against the Seattle Kraken on November 4 at Climate Pledge Arena.

The Kraken will make their first stop in Western New York on November 29.

Buffalo’s first game against cross-border rival Toronto will take place on Saturday, November 13 at KeyBank Center. The clubs have not faced each other since February 16, 2020, a 5-2 Sabres victory on home ice.

Due to NHL players’ anticipated participation in the 2022 Winter Olympics, Buffalo has only three games scheduled during the month of February, all of which are on the road (February 1 at Vegas, which wraps up a three-game Western Conference road trip, February 25 at St. Louis and February 27 at Dallas).

The NHL announced Wednesday that it had been working on two versions of the schedule — one that includes a break for the 2022 Beijing Olympics, and another that does not — pending the resolution to ongoing discussions with the NHLPA and the International Olympic Committee.

From the NHL on Thursday:

No final agreement or decision has been made to this point regarding the possible participation of NHL Players in the 2022 Beijing Winter Olympics. Talks remain ongoing.

Subject to reaching agreement with the NHL Players’ Association and the International Ice Hockey Federation on all outstanding issues, including appropriate COVID-19 insurance for NHL Players, the League has agreed, per the Collective Bargaining Agreement, to pause from Feb. 7-22, 2022 to accommodate NHL Player participation in the Olympic Games.

The NHL and the NHL Players’ Association will retain full authority to decide not to participate should COVID-19 conditions worsen or otherwise pose a threat to the health and safety of NHL Players, or for any other reason that may warrant such decision. In the event NHL Players participate in the 2022 Winter Olympics, the NHL regular season will resume on Wednesday, Feb. 23.

If, for whatever reason, there is no NHL Player participation in the Olympics, a revised Regular Season schedule will be released which, to the greatest extent possible, will adopt the dates and games reflected in the schedule contemplating Olympic participation.

The NHL is slated to host its annual All-Star Weekend in Las Vegas on February 4-5 as well.

The Sabres’ schedule also features 17 sets of back-to-back games, including the final pair of games of the regular season on April 28 at Boston and April 29 at home against Chicago.

Buffalo will play six preseason games before the start of the regular season. The full preseason schedule can be found here.