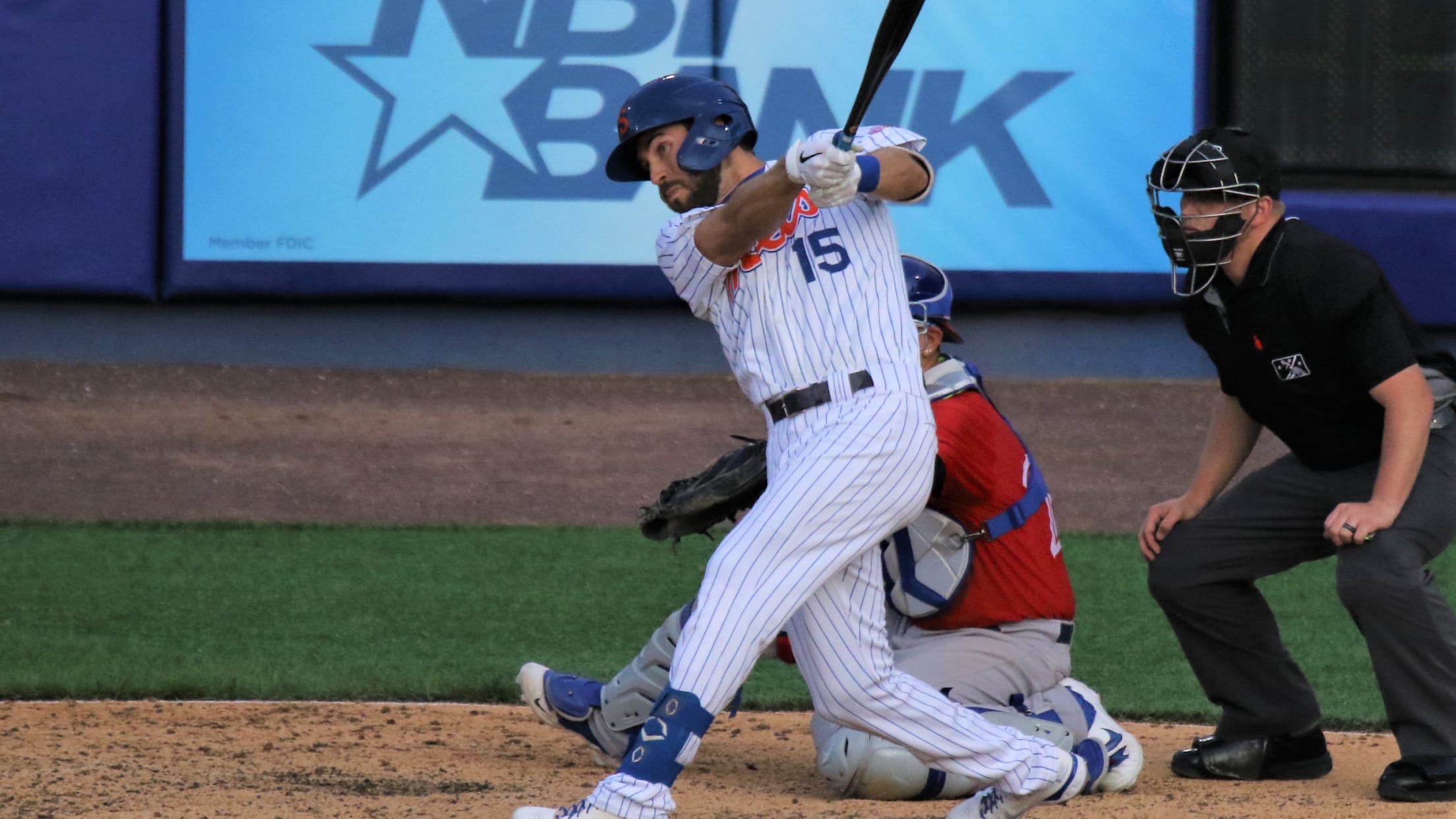 Syracuse and Buffalo met Thursday night for a doubleheader at NBT Bank Stadium with the Bisons taking both games to hand the Mets their 14th and 15th straight losses. Syracuse hosted its largest crowd of the season with 6,169 fans coming to NBT Bank Stadium and providing an energetic and fun atmosphere throughout the night.

In game one, Buffalo (25-18) struck first with a run in the top of the first inning. Breyvic Valera drew a one-out walk. While Kevin Smith was at the plate, Valera took off and rounded second on a passed ball but got caught between second and third base. Syracuse catcher Nick Meyer, however, airmailed the throw into center field, allowing Valera to score as the Bisons took a 1-0 lead. The run was not charged as an earned run to Syracuse starter Thomas Szapucki because of the passed ball and error.

Syracuse (11-33) responded in the bottom if the first. Khalil Lee drew a one-out walk, and Brandon Drury followed with a double as Lee advanced to third base. Drew Jackson then stepped in and hit a sacrifice fly to center field to score Lee and make it a 1-1 game.

In the fifth inning, Dilson Herrera hit a one-out single for Buffalo, and then Juan Graterol drew a walk. Logan Warmoth followed with a go-ahead RBI single to put the Bisons in front, 2-1.

In the bottom of the fifth, Lee led off with a solo home run to tie the game, 2-2. It was Lee’s second home run of the season.

However, things got ugly for Syracuse in the sixth. Szapucki returned for another inning of work and gave up a leadoff walk to Smith and then a double to Rowdy Tellez. Trey Cobb came in to relieve Szapucki, and after retiring Christian Colon, Cobb surrendered a two-run double to Cullen Large to put Buffalo in front, 4-2. Herrera followed with a two-run home run to increase the Bisons lead to four, 6-2. That wasn’t all for Buffalo in the sixth, however. Later in the inning, Warmoth hit a double, and then Jonathan Davis delivered with a single to score Warmoth for a 7-2 advantage. The next batter, Valera, doubled to score Davis and put Buffalo up 8-2.

Syracuse didn’t go down quietly, though. In the bottom of the seventh, Brandon Nimmo and Lee led off with back-to-back singles. After Brandon Drury and Jackson both flew out, Orlando Calixte hit a two-run double to left field to score Nimmo and Lee and cut the deficit to four, 8-4. Wilfredo Tovar then reached on a throwing error by the second baseman Herrera as Calixte came home to score to make it 8-5 with Buffalo still in front. Bisons reliever Bryan Baker relieved Casey Lawrence, and Baker retired Nick Meyer for the game’s final out as Buffalo took game one of the doubleheader, 8-5.

In game two, it was Syracuse getting off to a hot start. In the bottom of the first inning, Jackson led things off with a leadoff double. César Puello then reached on an error by shortstop Kevin Vicuña. Next, Lee drew a walk, and the bases were loaded with no outs. After Drury popped out, Calixte connected on a sacrifice fly to bring home Jackson and make it 1-0 Syracuse. Lee was thrown out attempting to advance to third on the play for the final out of the inning.

In the second, Tovar led off with a solo home run that gave the Mets a 2-0 lead. It was Tovar’s first home run of the season. David Rodriguez and Martin Cervenka followed with back-to-back singles. After Ferguson went down on strikes, Jackson delivered with a two-run double to left to score Rodriguez and Cervenka and increase the lead to 4-0 Mets.

After the first two innings from Syracuse starter Vance Worley were scoreless, Buffalo got on the board in the third. Vicuña hit a one-out single, and then with Valera at the plate, Vicuna stole second base. After Valera popped out, Large connected on an RBI single to score Vicuña and make it 4-1 with the Mets still in front.

In the fourth, the Bisons continued to cut into the deficit. With two-outs and White on base, Nash Knight and Rodrigo Vigil drew back-to-back walks to load the bases. Vicuña then delivered with a two-run single to make it a one-run deficit, 4-3.

Worley returned to the hill to pitch the fifth for Syracuse. White got aboard with a one-out walk, and Richard Urena followed with a two-run go-ahead home run to give Buffalo their first lead, 5-4.

In the bottom of the seventh and the Mets still trailing by one, Jackson led off with a walk. While Puello was at the plate, Jackson stole second to get into scoring position as the tying run. After Puello struck out, Khalil Lee drew a walk. Drury then grounded into a fielder’s choice as the shortstop Vicuña tossed to second base to retire Lee for the second out. With two outs and runners on the corners, Calixte grounded into a force out to end the game, and Buffalo won, 5-4.

The Mets and Bisons return to NBT Bank Stadium on Friday night for game four of the six-game series. First pitch is set for 6:35 p.m.