Just a month ago, former Republican Sen. Rick Santorum, who’s currently a CNN contributor, sparked a viral controversy after insisting that “there isn’t much Native American culture in American culture” at a Young America’s Foundation event on Friday, April 23 — later apologizing while claiming that he “misspoke” at the conservative gathering.

Before the faith-driven pilgrims filled with Judeo-Christian values who fled from England in the name of religious persecution initially landed at Plymouth Rock in Massachusetts around 1620, “we came here and created a blank state,” according to Santorum. “We birthed a nation from nothing.”

But the legacy of the Red Jacket Peace Medal tells another tale in the eyes of Dr. Joe Stahlman, director of the Seneca-Iroquois National Museum.

The Buffalo History Museum recently returned a lost artifact that was given back to the Seneca Nation almost half a century later. The Red Jacket Peace Medal was gifted by former President George Washington 229-years-ago, two years before the Treaty of Canandaigua of 1794 — one of the most significant treaties brokered between any Nation and the United States. 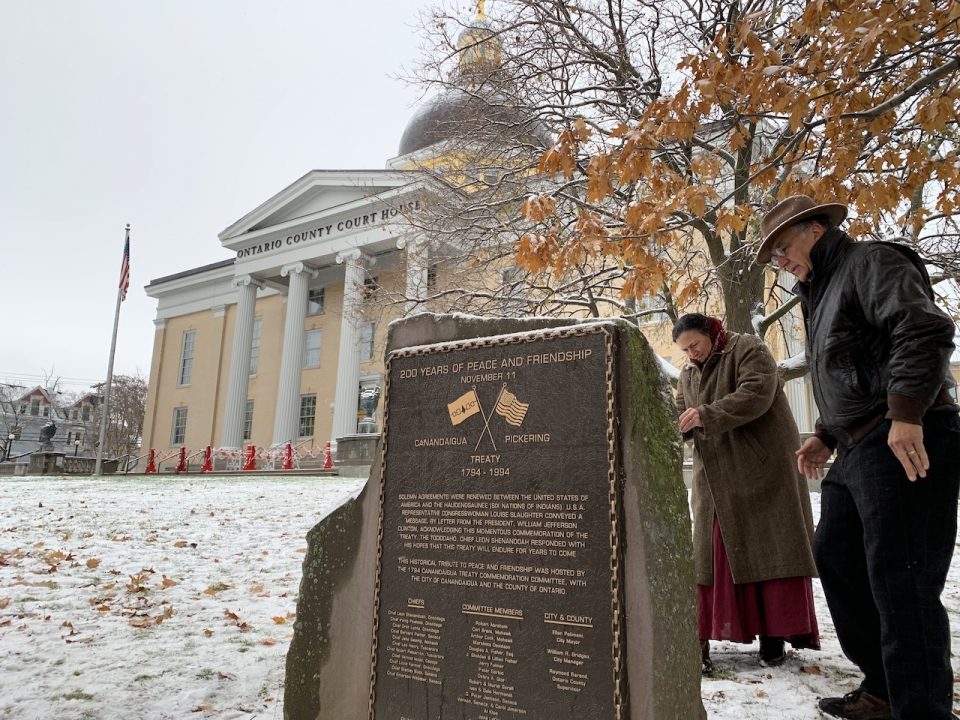 A dusting snowfall coats the grassy grounds surrounding the historic Canandaigua City Hall during the 225th anniversary of the Treaty of Canandaigua of 1794. Credit: Gabriel Pietrorazio, FingerLakes1.com.

Each year, Haudenosaunee peoples from the Seneca, Cayuga, Oneida, Onondaga, Tuscarora and Mohawk Nations return to the City of Canandaigua to commemorate the treaty-making process — reminding each other that the pact and promises are still alive even today.

And the 225th anniversary of the Treaty of Canandaigua happened with no hitches on November 11, 2019. 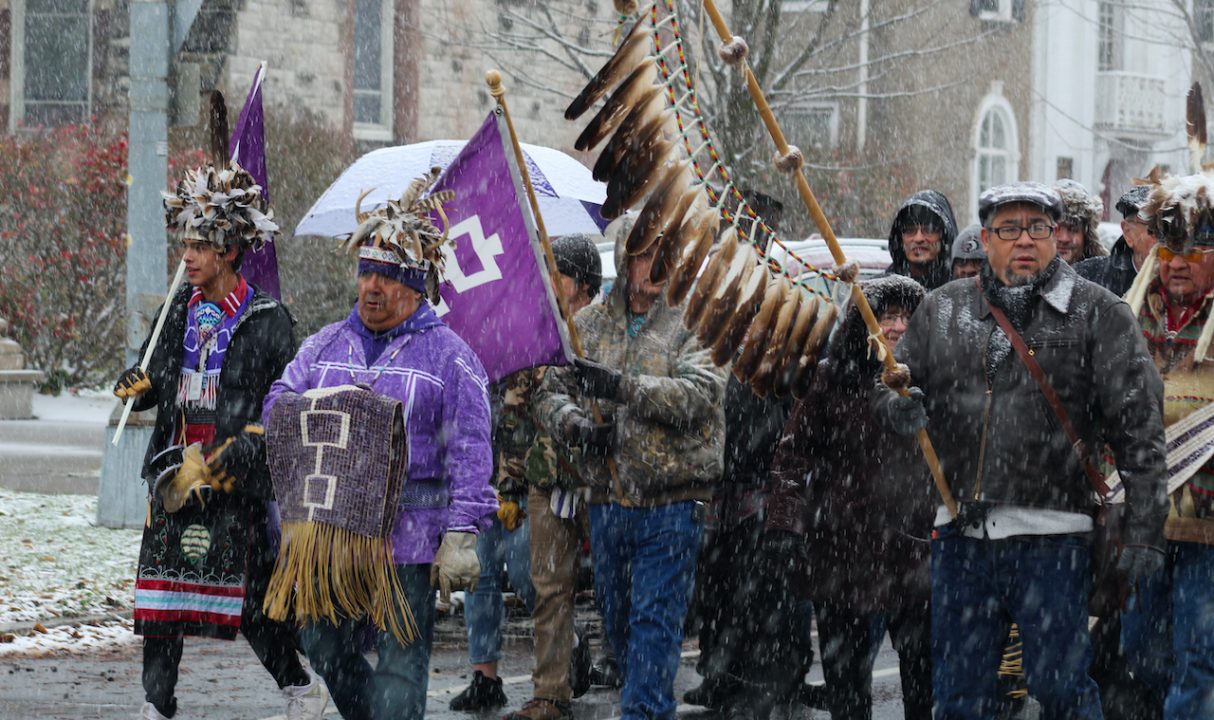 Departing from the Canandaigua Primary School on West Gibson, Haudenosaunee peoples from all across the Six Nations marched along slushy asphalt and into sleeting snow, reclaiming the city streets of Canandaigua until arriving at the Ontario County Courthouse. Credit: Gabriel Pietrorazio, FingerLakes1.com.

Less than a year later, a formal request had been filed by the Seneca Nation for the medal’s repatriation in accordance with the Native American Graves Protection and Repatriation Act in October 2020.

Eight months later, the Red Jacket Peace Medal is now officially on display at the Onöhsagwë:de’ Cultural Center inside the Seneca-Iroquois National Museum: the site where a repatriation ceremony occurred on Monday, May 17.

“I like to remind the United States that the Haudenosaunee, especially the Seneca, play an important role in your early survival; that is what I see when I look upon the medal,” Stahlman said.

He also acknowledged that Indigenous peoples like the Seneca “need to have moments of reconciliation,” which originate from their collective past: one that is storied and equally complicated.

Matthew Pagels, the Seneca Nation’s president, believed that the medal “represents what lives inside each and every Seneca – the heart of a sovereign people and our rightful recognition as such.”

“This is our identity as a Nation. It cannot be owned, bought or sold. It belongs to all of us and is passed from generation to generation so it can live forever,” Pagels continued. 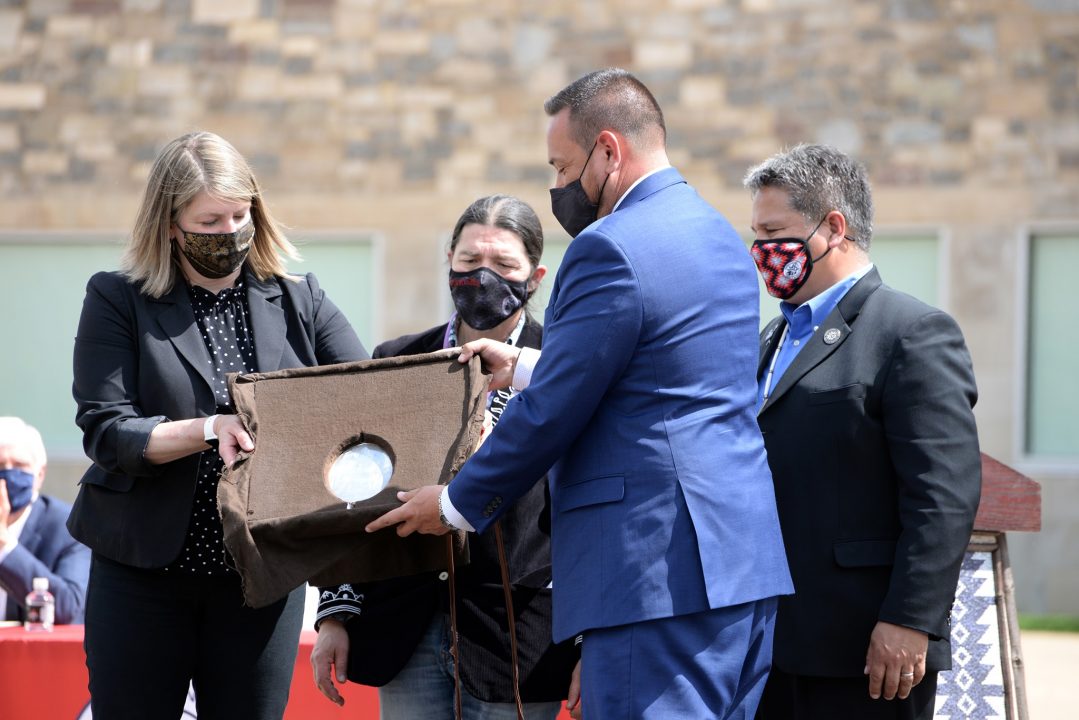 Elected officials including State Senators Sean Ryan [D-60] and George Borrello [R-57] attended the celebration in solidarity with the Seneca people as well.

Ryan applauded the Buffalo History Museum for “their decisive action” in returning the medal to “its rightful owners,” which is a necessary step in “building strong, meaningful and peaceful relationships” between Nations and non-Indigenous communities.

“The return of the Peace Medal – an explicit symbol of this relationship — is an especially significant act, and a momentous occasion here in Western New York,” Ryan said.

Borrello echoed the sentiments of Ryan, insisting that “peace and friendship endures today as evidenced by today’s repatriation ceremony.”

In a letter addressed to his “friends” within the Seneca Nation, even Senate Majority Leader Chuck Schumer mentioned that “it is incumbent upon all of us to ensure the contributions to our national culture and heritage are preserved and well-understood.”

“It is my fervent hope that the return of this medal to its rightful stewards will serve as a useful precedent for similar such artifacts around the United States and the world,” Schumer wrote. “The vibrant thread the Seneca Nation has woven into our national tapestry deserves to be celebrated. The repatriation of Red Jacket’s medal is a significant cause for celebration.”

Red Jacket, who originally signed the Treaty of Canandaigua of 1794, alongside other notable Seneca including Cornplanter and Handsome Lake “had a geopolitical impact that is still felt today,” according to Schumer.

Now he’s asking for everyone to “contemplate our shared desire for continued cooperation, understanding, and tolerance.”

As a result, Melissa Brown, the Buffalo History Museum’s executive director, revealed that the museum “dedicates itself to reassessing its own collection and history of artifact acquisition” — setting a new precedent in the process by creating an opportunity for other artifacts of cultural patrimony to properly return to their rightful owners in the future. 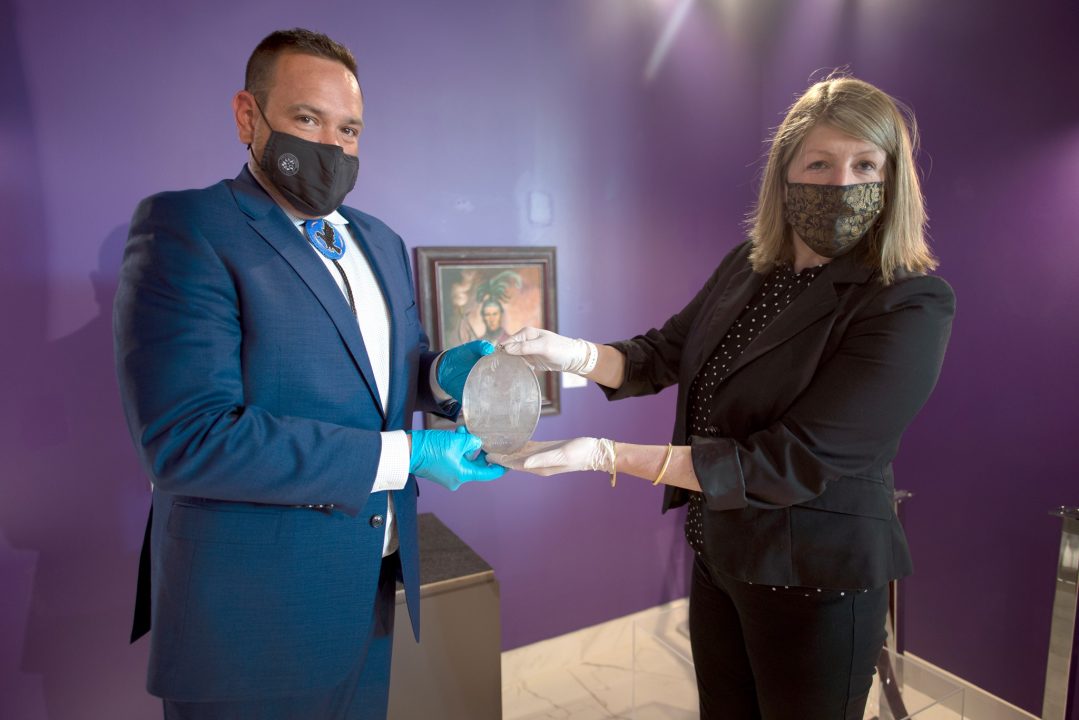 “Much like what the Peace Medal represents, this is a sign of friendship and connection between the Museum and the Seneca Nation,” Brown said. “As we move forward, we look to collaborate with the Nation to ensure the legacy of Red Jacket and the history of the Seneca Nation throughout our future exhibits, programs, and community events.”

Walter Mayer, who serves as the senior director of the Museum Collections at the Buffalo History Museum, has overseen the medal’s “safe keeping” for more than 31-years and witnessed its emotional return back to the Seneca homelands.

It might’ve been a bittersweet farewell, but for Mayer, she considered it “an even greater honor to be here to see it rightfully returned.”