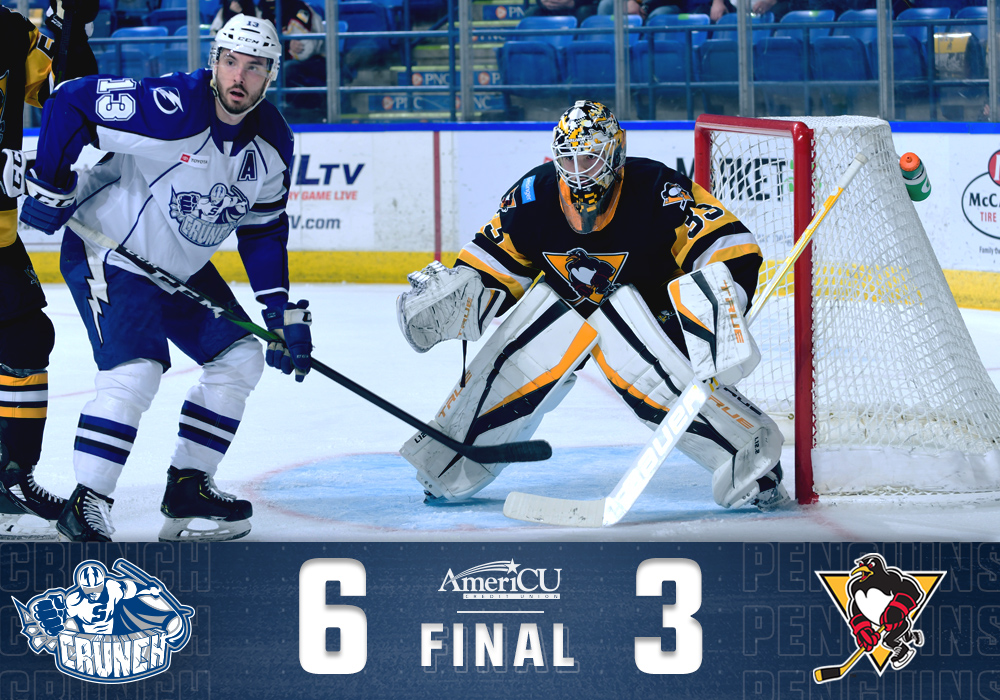 Gemel Smith completed a hat trick during a six-goal first period as the Syracuse Crunch rolled over the Wilkes-Barre/Scranton Penguins, 6-3, tonight at the Mohegan Sun Arena tonight.

Smith posted a career-high five-point night with three goals and two assists to help the Crunch move to 6-5-1-0 on the season and 4-1-0-0 in the seven-game season series against Wilkes-Barre/Scranton.

Crunch goaltender Christopher Gibson earned his second straight win with 23 saves between the pipes. Penguins goaltender Emil Larmi allowed four goals on five shots before being relieved by Alex D’Orio halfway through the first period. D’Orio went on to stop 15-of-17. Syracuse went 2-for-5 on the power play, while Wilkes-Barre/Scranton was 2-for-7.

The Crunch opened scoring with three goals on their first three shots of the game. At 3:23, Declan McDonnell sent a pass from along the goal line for Smith to redirect in. Just 19 seconds later, Smith centered a feed from the end boards for Boris Katchouk to send in while all alone in the slot. A minute later, Smith went coast-to-coast on the power play for his second of the game.

Smith completed the hat trick 8:40 into the first period. Cole Schwindt carried the puck into the zone down the left wing before passing over to Smith during a 2-on-1. Syracuse continued to build their lead at 10:55 when Devante Stephens fired in a slap shot from the left point off a face-off win by Smith. The Crunch made it 6-0 at the 14-minute mark when Jimmy Huntington tipped Peter Abandonato’s wrister from the left circle while on the power play.

The Penguins finally responded with 2:32 remaining in the first period when the team capitalized on a turnover and Tim Schaller scored with a wrister from the left side.

Josh Currie stole another one back for Wilkes-Barre/Scranton 3:57 into the middle frame with a right point shot while on the man-advantage.

The Penguins added another power-play goal halfway through the third period. After some quick tic-tac-toe passing, Nick Schilkey finished off a cross-zone feed from Schaller as he cut towards the net.

The Crunch held on to their three-goal lead through the remainder of the third and earned their fourth consecutive win against the Penguins.

Syracuse is back in action on Friday when the team travels to face the Rochester Americans.