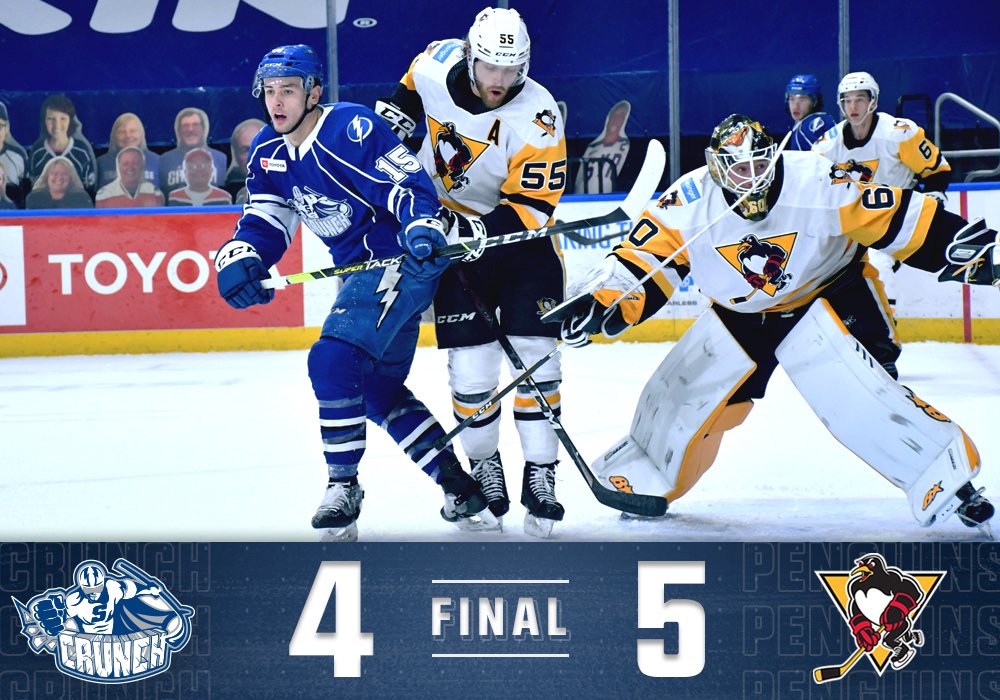 The Syracuse Crunch came back to tie the game twice in the third period, but were unable to overtake the Wilkes-Barre/Scranton Penguins, falling 5-4 tonight at the Upstate Medical University Arena.

After Wilkes-Barre/Scranton built a 3-1 lead through two periods, the teams exchanged five goals in just 4:35 early in the third before the Penguins netted the game-winner. Alex Barre-Boulet led the Crunch with two goals on the night. Aleksi Heponiemi added two helpers.

Crunch goaltender Sam Montembeault turned aside 23-of-28 shots, while Emil Larmi stopped 29-of-33 in net for the Penguins. Syracuse went 4-for-5 on the penalty kill, but was held scoreless on three power play opportunities.

The Penguins jumped out to a quick lead just 46 seconds in. Radim Zohorna shoveled a backhander that trickled past Montembeault for Jan Drozg to poke in.

At 15:31, the Crunch evened the score. Luke Witkowski grabbed the puck along the boards and fed Barre-Boulet for a wrister from the bottom of the left circle.

Wilkes-Barre/Scranton potted two in the second period to build up a 3-1 lead. Chase Berger lit the lamp at the 6:40 mark followed by Kyle Olson at 19:36.

Two minutes into the third period, Grigori Denisenko fired in a shot from the slot. A minute later, Gabe Fortier deked around a defender and sent home an equalizer.

The game only stayed tied for 16 seconds before Will Reilly gave Wilkes-Barre/Scranton another lead. Thirty seconds later, the teams were knotted again when Barre-Boulet tallied his second of the night on the back door.

Jordy Bellerive put the Penguins back up yet again at 6:45 and they held onto the lead through the final horn.

The Crunch travel to Utica to face the Comets on Wednesday.