On Sunday, Governor Andrew Cuomo was in New York City discussing the implications of rising COVID-19 cases across the state as the holiday season approaches.

He started his remarks off with a focus on the season, which includes a lot more socialization under normal circumstances. “There are more parties, people are shopping, students are coming home from college – sometimes in states with higher infection rates, and there are more family gatherings,” Cuomo said. “There are 37 days between today and January 2nd.”

The implication of his message was clear: The next 30-something days will have a big impact on the state’s battle with the Coronavirus Pandemic.

“I believe the COVID rate will increase,” Governor Cuomo explained, making a comparison to weight gain during the holiday season. “The only question is how much and how fast,” he continued, reconnecting to the virus and how it transmits. “And nobody knows.”

He outlined various scenarios by which the rate of COVID-19 increases over the next several weeks, as the holiday season unfolds. Thanksgiving is days away, and Governor Cuomo says that will mean a spike of some kind.

“Nobody knows because it depends on how we act … It’s a function of social behavior during this period,” he continued. “It’s up to individuals and its up to individual communities.” Cuomo said communities across New York State are all acting very differently as the pandemic continues. He says that was what drew state officials to the micro-cluster strategy, which replaced the former four-phase reopening process implemented in the spring. 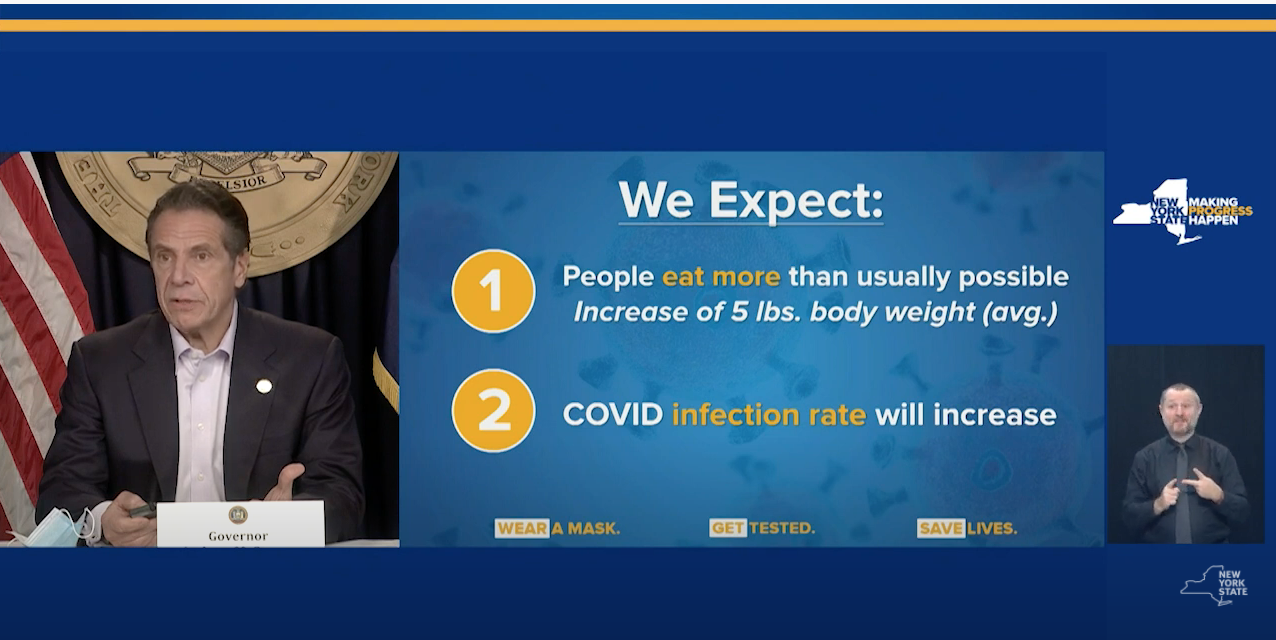 “It’s up to you in your community. A micro cluster is small. It’s your neighborhood. It could be a couple of miles,” Cuomo continued. “The advantages, we get to say to people be aware of your own activity in your own community. We get to target more closely enforcement activities. If we put in economic restrictions, we don’t have to restrict everyone, just because [of one community].”

Cuomo gave a refresher on yellow, orange, and red zones – defining how each would be identified, but didn’t give the context that was necessary for many communities in the Finger Lakes and Central New York.

Larger counties (with a population of 150,000 or more) will need to have a 7-day rolling average positivity rate of 3% for 10 days. These are considered ‘Tier 2’ counties, according to the state. Monroe and Onondaga counties are included in this group. To enter orange or red zone they would need to hit 4% and 5% respectively in the 7-day rolling average category for 10 consecutive days.

Medium counties (with a population of 50,000 to 149,999) need to have a 7-day rolling average positivity rate of 3.5% for 10 days to enter yellow zone. These are considered ‘Tier 3’ counties, according to the state. These counties include Cayuga, Ontario, Tompkins, Steuben, and Wayne. To enter orange or red zone they would need to hit 4.5% and 5.5% respectively in the 7-day rolling average category for 10 consecutive days.

Small counties (with a population under 50,000) are considered part of ‘Tier 4’ and have the most-relaxed requirements for entering yellow zone restriction. They must have a 7-day rolling average positivity rate above 4% for 10 days. This includes Cortland, Seneca, Yates, and Schuyler counties. To reach orange or red zones, 7-day rolling average positivity rate would need to be 5% or 6% for 10 consecutive days.

Back at the press conference, Governor Cuomo outlined the importance of keeping schools open. Originally, schools were forced to go remote if they could not keep up with a testing pattern for a prolonged period of time. Now, schools have the ability in all three zones to ‘test out’ so that students can continue learning in-person. “You can reopen the school if the positivity rate is low. We want schools open. All the leading experts say keep K-8 open,” Cuomo continued. “If the positivity rate in the schools is lower than the positivity rate in the surrounding community it’s safer for the child to be in school, than in the community. Not to mention the child’s getting an education. So we want to keep schools open.”

He says junior and senior high schools are different. “There the students are less responsible and there’s generally a higher infection rate,” Cuomo added. Many districts have been moving toward hybrid or remote learning in those settings. He said local communities have control on what happens in their school district, up until they enter one of the state’s ‘zones’. Then, they will have to test out of restrictions, if they are imposed.

As was the case with Halloween, the Governor said that the state won’t know if people took the warnings about Thanksgiving seriously until a couple weeks later. “How high will the infection rate go?” he asked. “We won’t know how significant until December 1, December 10. You’ll start to see the results of what happened over the Thanksgiving weekend.”

By mid-January Governor Cuomo expects that the state’s regions will see the full-impact of the holiday season. “How high will the infection rate go?” Cuomo asked rhetorically one more time before taking questions. “You have a trajectory that goes so high, the whole scale changes. You see those other states at 20, 30, 40 [percent infection rate]. You could see our whole scale change by the time this is over. I would not be shocked if they said on January 10th or January 15th – we’re up at 7-10%. That could easily happen if we’re irresponsible. It could be even higher if we’re irresponsible. It’s purely a function of what we do.”