As President Donald Trump drove around alongside the U.S. Secret Service to greet visitors who stood outside of the Walter Reed National Military Medical Center in Bethesda, Maryland, some still awaited for the Commander in Chief to return back to his home at the White House.

Liu Liu was one of them, a Tibetan national in his own right who is also a staunch Trump supporter. 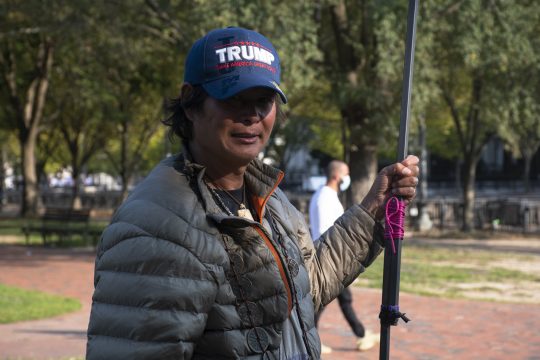 Liu Liu stands out in front of the White House without a mask on in support of President Trump on Sunday, October 4.

He could barely speak bits of broken English, but that did not stop him from communicating with FingerLakes1.com.

In a moment of pure wit, Liu pulled-out his iPhone and actually typed-out his answers to our questions with Google Translate.

Although he couldn’t speak English for himself, he could still hear and listen well, which drastically differs from his familiarity with the Chinese language.


As of Sunday, Liu has stood outside the White House for the last 10-days straight without a mask to make a political statement.

Liu admitted that he plans on staying outside of the White House for 14-days, the recommended time for which someone is supposed to quarantine whenever they’ve tested positive for COVID-19.

Even though Liu could not have anticipated that Trump contracted the virus that has killed more than 200,000 before the start of his symbolic protest, he still stands inside Lafayette Square in sheer defiance of the Center for Disease Control and District of Columbia mask-wearing mandates.

Aside from actively not wearing a mask, he firmly held onto a makeshift flagpole that stretches nearly 18-feet into the air, one that he personally fabricated and firmly grasped within his hands. 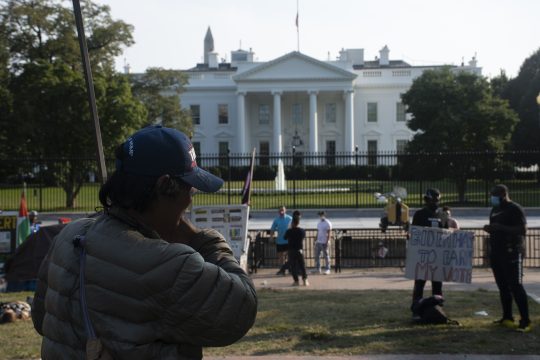 A Trump 2020 re-election flag flew proudly in the breeze over the White House and above that, a hand-written white banner hung with a personal message to share with the rest of the world, one that claimed he hopes to “save Trump” from “China’s COVID-19.”

On his iPhone, however, he also wrote that “Trump supports all people” and to “support Biden is like a ghost,” which is a reference about his older age even though the Democratic challenger has not contracted COVID-19 yet unlike his opponent. 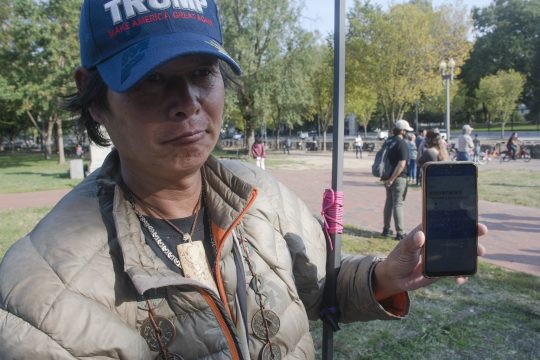 Liu communicates through his iPhone and shares opinions about Trump and Biden.

Standing right across from Liu and facing in the opposite direction, Michael Gee does not shy away from sharing his own political beliefs just a few hundred-feet away from the fenced-off White House front lawn. 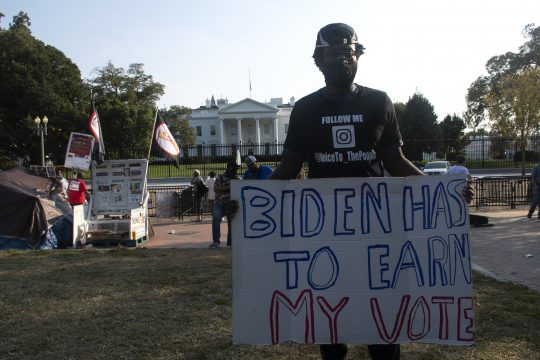 Michael Gee holds a sign suggesting that former Vice President Joe Biden has to earn his vote ahead of Election Day on November 3.

“Full disclosure, I lean more towards the progressive side,” Gee told FingerLakes1.com.

Gee, a longtime D.C. resident believes that former Vice President Joe Biden should actively listen more to the majority of Americans when it comes to codifying his platform for the presidential bid in three key policy areas: fighting for greater access to healthcare, forgiving medical debt and legalizing cannabis nationwide.

“I’ve never smoked a day in my life. Legalizing cannabis is supported by a large majority of the country. Just those three things alone will get so many more votes, and it won’t really cost him votes because there’s so much support for it,” he claimed.

However, Gee had been insistent on one particular issue most of all: healthcare.

Gee has been already coming to Lafayette Square to stand quietly and chat with some walkers or bikers while trekking through the scenic park that’s nestled deep within the nation’s capital.

When asked about the recent first presidential debate held in Cleveland on Tuesday, September 29, Gee had some dissenting opinions to share as a disinterested citizen who does not seem to be represented by either of the main-party candidates ahead of the 2020 election.

For Gee, he characterized last Tuesday’s presidential debate between the Democratic and Republican front runners as “a middle finger to progressive voters,” one that lacked any substantive policies that appealed to him as a self-identifying progressive.

But long before the debate ever started or ended, Gee had been carrying that same sign to the White House for at least a month.

He has felt that way about Biden for quite some time and when asked about who he’d vote for if the election were to be held on that Tuesday after the debate, this Sunday or even on November 3rd, the answer seemed to be exactly the same.

“I thought about these candidates since 2019. If the election were held today, I’m one of those voters unfortunately, that will not vote for Trump. There’s no way, but I won’t vote for Biden either. There are other candidates that speak to what I want,” Gee admitted.

In sheer protest, Gee remained open to writing-in a candidate like an “Elizabeth Warren or Bernie Sanders,” as he put it.

Despite feeling disenfranchised by both candidates amid this contentious election year, Gee still finds motivation to stand outside the White House and exercise his fundamental rights in the hopes of making “a small difference.”

“I always tell people, I joke around; I must be crazy to have this sign around. I’m just trying to make a small difference. If I can just stand out here with a sign and talk, we should have these conversations with our friends and family,” Gee mentioned.

That’s what inspired him to start his own social media campaign on Instagram @VoiceTo_ThePeople, saying that every bit counts, now more than ever before.

With Trump now stuck inside the Walter Reed National Military Center for the foreseeable future instead of sitting behind the Resolute desk within the Oval Office, Gee considered that “if you’re that careless, yes, that [contracting COVID-19] can happen.”

Although he has openly disavowed supporting Trump in any capacity whatsoever, Gee still had a personal lesson to share with the rest of country that comes straight from the heart of the nation’s capital, just 29-days before the battle for the White House is set to occur. 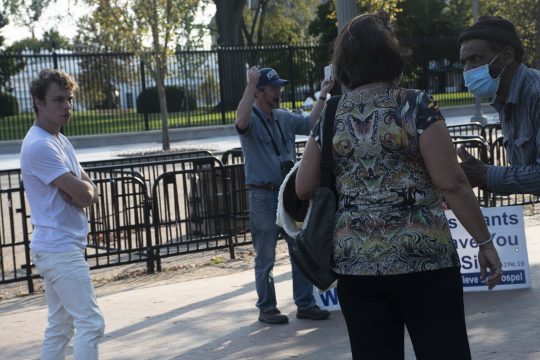 “You got Trump supporters, Biden supporters, progressive supporters; you got Black Lives Matter [Plaza] right down the road. Everybody’s living in peace, just voicing their opinions. That’s how it should be,” he ended.