Kelly L. Anderson, age 42 of Dundee, was arrested on a Yates County Court warrant Tuesday morning in Dundee by Yates Sheriff’s and State Police Investigators. She is charged with 2nd degree murder of her 16-month-old son, Ethan M. Eslick, in 2002. 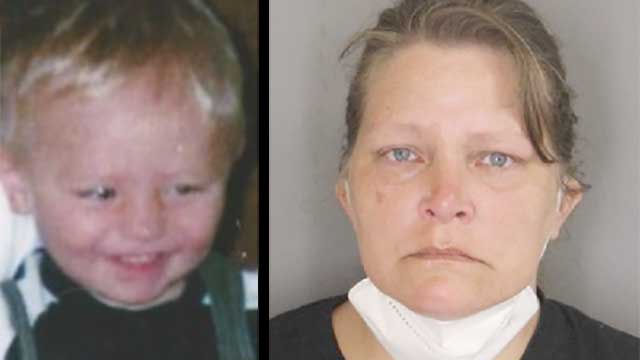 On August 29, 2002, Yates County 911 received a report that above victim reported found deceased by his mother Kelly L. Axtell, age 24 at the time (now named Anderson) at 47 Highland Drive, Dundee, NY. At the time in the household was his brother Jordan Eslick age 3, and Kelly’s live-in boyfriend Ronald McGuire Sr. age 28 at the time. The body was sent to the Monroe County Medical Examiner per Coroner for forensic autopsy. The official ruling on the cause of death was not until several months later in 2003 as homicide by asphyxiation. The criminal investigation was extensive, however no arrests were made, and the matter turned into an open cold case.

“In the fall of 2018,” according to CID Lt. Scott Backer, “new leads were developed and Sheriff’s Criminal Investigators enlisted the resources of the NY State Police Troop E – BCI Special Investigations Unit, and the Federal Bureau of Investigation, Buffalo, NY and the FBI Behavioral Science Unit in Quantico, VA. in continuing this cold case investigation.” Criminalistics and forensic science had developed over the past several years and the Yates County District Attorney’s office enhanced its legal and search warrant applications as well in this case.

“Resources devoted to this case especially by the NY State Police BCI Special Investigations Unit have been exceptional, and we thank them for the collaboration with YCSO Criminal Investigators, especially our lead Inv. Arlyn Cunningham, with dogged determination,” said Sheriff Spike. “This has been a time consuming matter, that Investigators have remained steadfast on that resulted in District Attorney Todd Casella presenting the matter to a Yates County Grand Jury that returned a sealed indictment June 27, 2020.”

“Anderson was arrested today without incident in Dundee, NY after her return from Florida, and this culminates long overdue justice for Ethan,” said Sheriff Spike who thanked all those involved in this case.

Anderson is currently being held in the Yates County Jail following CAP court virtual video arraignment at 3:00 pm on $250,000 cash bail or $500,000 bond to reappear in county court at later date.