With nearly a dozen on-call, last night’s Geneva City School District public budget hearing brought forth their plan as the Board of Education overviewed the proposed 2020-21 school budget and supplemental propositions for this year’s absentee ballot-only vote.

In addition to a project 4.3 percent increase on total budget spending across all categories, the Board of Education seeks to purchase six brand-new school buses under Proposition 2 and even start to stockpile a transportation reserve fund to purchase more vehicles in the future under Proposition 3 amid unfathomable funding challenges as the state saddles a mounting deficit somewhere in the billions due to the coronavirus pandemic response.

Director of Business and Finance Mary E. Gere-Penna presented the proposed budget via Zoom in a PowerPoint to kickstart the meeting.

Although the pandemic has drastically impacted the city school district, Gere-Penna claims that the Board of Education has remained attentive during a short period where several changes in protocol and procedure have occurred throughout their schools.

However, the mission of the district has remained the same, according to Gere-Penna.

“Our mission has remained consistent and relevant,” Gere-Penna stated.

Gere-Penna noted that her presentation would trace the budget story from December until now and how the BOE reached these numbers ahead of the next fiscal year.

With a current student of 2,201 students across all district schools, she explained that the total budget has increased considerably from last year to the 2020-21 fiscal year with a steep 4.3 percent hike.

Across eight budget line categories, the expenditure costs for salaries, BOCES, debt service, purchased services, and transfers have all risen, especially for the BOCES allocation.

Gere-Penna mentions that this spike for BOCES is due to the high costs incurred for out-of-district special education placements, bringing the budget line from $9,947,925 to $11,218,400 in comparison to last year. 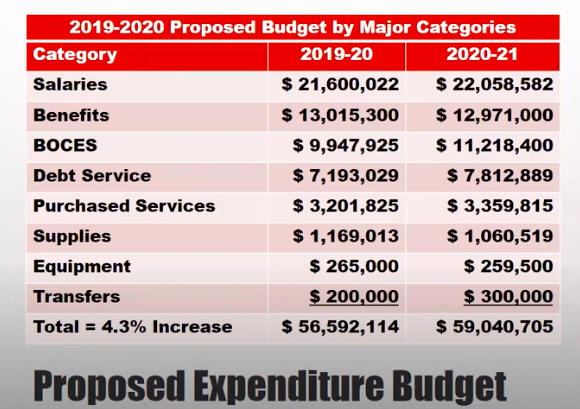 At the same time, slim cutbacks have occurred in the remaining three categories: benefits, supplies, and equipment in comparison to the previous 2019-20 fiscal year.

In a three-part budget analysis, Gere-Penna explains that in comparison to the approved 2019-20 budget and this year’s proposed 2020-21 budget sees a slight decrease in administration costs, amounting -0.70 percent.

She then noted that the program and capital portions of the budget increased by .30 percent and .40 percent respectively, meaning that the thinning of the administration line in tandem with the slight aforementioned rises yields a net-zero gain or loss.

Gere-Penna also emphasized that the projected budget is based on the current legislative allocations from the state, which have yet to account for any gaps in funding due to cutbacks in potential disbursements amid the pandemic.

With 60 percent of the budget coming from New York State, uncertainty remains the sole constant at this time, and Gere-Penna notes that there may be as many as two separate time periods when cutbacks may occur during the 2020-21 fiscal budget year.

As a result, the Board of Education has consulted and agreed to utilizing reserved fund balance, a $150,000 uptick from the previous year in anticipation for said cutbacks.

Second, the projected tax levy for this year increases by 1.96 percent from last year, leaving a $394,313 difference.

Although raising the tax levy seems daunting, Gere-Penna assures that this increase does not directly relate to a rise in taxation, if the new levy is approved.

She even prepared an estimated impact chart, showcasing the impacts of the tax levy on a house with a full assessed value of $100,000 as an example to highlight the incremental tax inflation under this unique model. 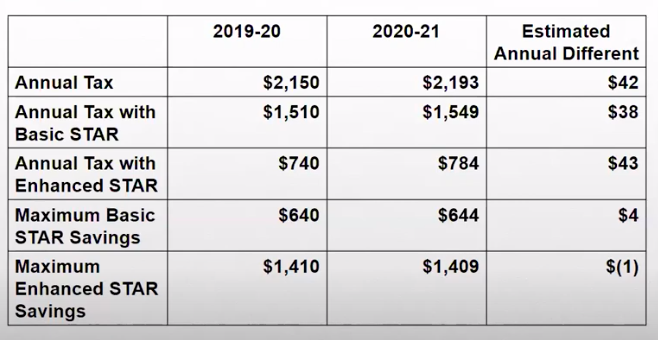 Beyond the necessary bare-bone annual budget, the Board of Education wishes to invest during the pandemic to purchase six brand-new school buses under Proposition 2 through a bond resolution that was adopted by the BOE on March 9th.

Each vehicle seats 65 passengers at an estimated cost of $124,000 each, which collectively amounts to the maximum aggregate cost of $744,000, just shy of a quarter of a million dollars.

In accordance with Section 3651 of the Education Law, the Geneva City School District can pursue the creation of a transportation vehicle reserve fund, which requires a simple majority vote to pass.

As Proposition 3 reads, “… with the purpose of such fund being to finance the purchase of school buses, vehicles and equipment that would be eligible for financing under the Local Finance Law, and costs incidental thereto, the ultimate amount of such fund to be $10,000,000, plus earnings thereon, the probable term of such fund to be ten (10) years, but such fund shall continue in existence until liquidated in accordance with the Education Law or until the funds are exhausted…”

Meaning, the dubbed “2020 Transportation Vehicle Reserve Fund” is projected to cost $10 million over a ten-year period through the financing deal under Local Finance Law, according to the Board of Education.

However, Gere-Penna stated that the potential transportation reserve fund is “a zero-cost impact proposition.”

Voting by Absentee: 5 p.m. and No Exceptions

Following the full presentation on the proposed budget and supplemental propositions, the floor was opened to the public, allowing them to ask any questions.

Larry Townley asked the sole question for the evening, inquiring how its legal for Governor Andrew Cuomo to essentially stop and subtly suppress the budget vote by 5 p.m.

In other cases, the elections would allow postmarked mail on that same date of the deadline to be accepted whereas Cuomo’s executive order specifies a strict time stamp for districts to receive that important postage mail.

This year all voting for school budgets across the state are to be counted through absentee ballots only in response to Governor Andrew Cuomo’s executive order.

Adrianne Miller, the board clerk candidly agreed with him, saying, “It didn’t make sense to us either.”

After consulting with other neighboring town clerks, she concluded that the Governor’s ruling was final and unchallengeable.

Miller even confided in the city postal office, sharing her earnest concerns and reminding them about the upcoming Tuesday date in an effort to inspire some urgency to obtain the ballots that are presumably on the days leading up to the final submission date.

Miller and Gere-Penna also reminded Townley that a drop-box location is available for those who simply do not trust the federal postal service getting their mail in on-time ahead of June 9th.

For this election, an eligible voter is considered a citizen of the United States, at least 18-years of age, and a resident of the Geneva City School District for at least 30 days.

With absentee ballots being mailed this week, the harsh deadline has been set by Cuomo for all ballots to be collected by 5 p.m. Tuesday, June 9th.

School districts like Geneva have been informed that if any ballots that are received after that 5 p.m. cut-off, these ballots are deemed invalid and to not be accounted for in the final tally.

As for the school district, they are preparing to collect all ballots by offering a drop-off mailbox for those who seek to hand-deliver their ballots by placing them at the designated location, which is the District Office entrance at the North Street School.

Nine Candidates, One Seat: Board of Education Race

In addition to the approving the proposed annual budget and two propositions, a school board election lurks on the ballot this June as well. 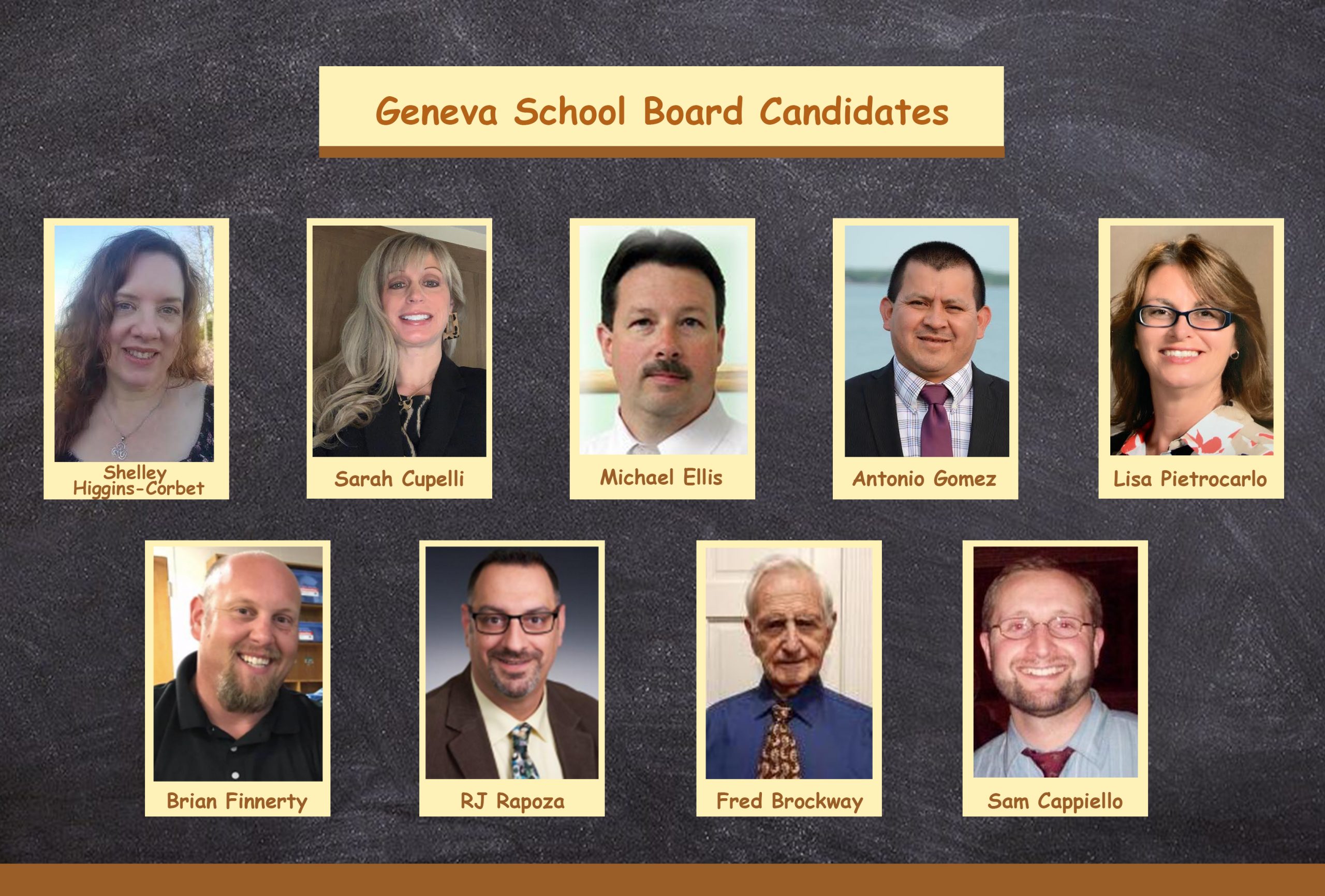 Aside from Ellis, Brian Finnerty another candidate who contends for his spot in the upcoming the school board race were the only two candidates on the call during the virtual budget hearing event.

Editor’s Note: Although information is scarce on the candidates, FingerLakes1.com has compiled a comprehensive questionnaire from the nine candidates in this race, which will all be published this Sunday, May 31st.