Top 3 finishes to a Watkins Glen NASCAR race this century

Watkins Glen is not only steeped in tradition as a former US F1 Grand Prix circuit, but also unique for being one of just two road circuits in NASCAR – the other being located in Sonoma, CA. Far removed from the oval layout of a typical NASCAR circuit, Watkins Glen has stumped many a driver, leading to an array of dramatic twists and pulsating finishes. Here are our top three from this century!

With qualifying called off because of adverse weather, the overall leader Jeff Gordon was granted pole position. For a significant stretch of the race, Gordon looked to be capitalizing on his good fortune, leading for 51 laps. While that achievement was not important in the grand scheme of the season itself, they did contribute to his standing as the man who has led the most laps across NASCAR races (262) in Watkins Glen: 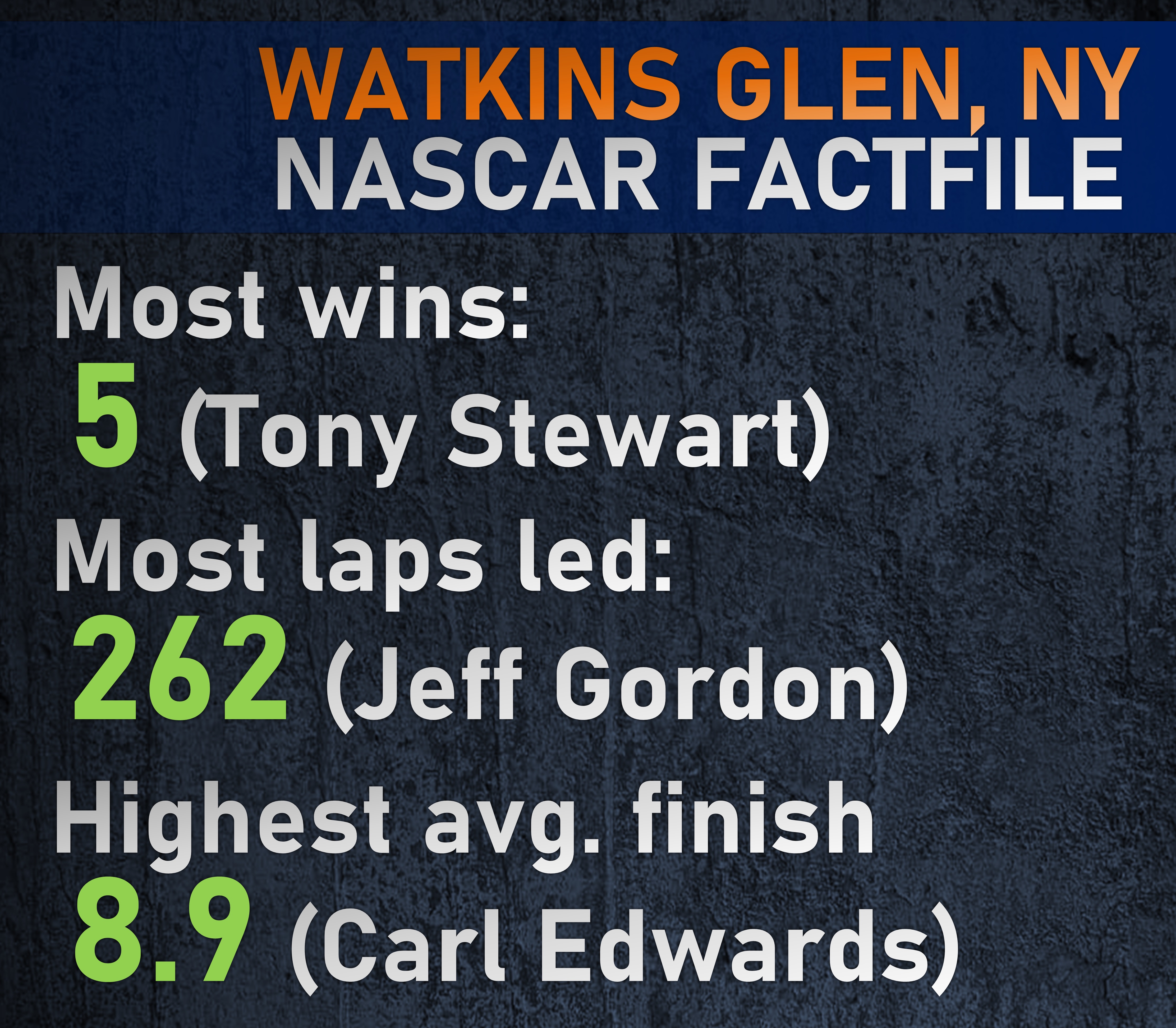 Also, the man who has completed the most laps (2,075), Gordon’s race was disrupted by an incident at Turn 1, just 18 laps before the end. Three drivers – Kevin Harvick, Juan Pablo Montoya and Jeff Burton – crashed, leading Harvick to confront Montoya and earn himself a period of probation.

Thirty minutes of red-flag stoppage ensued, but Gordon’s momentum had been irrevocably disrupted, and he span out with just two laps remaining, handing Tony Stewart the lead. Stewart had to fend off a relentless challenge from Carl Edwards, but won out after Edwards overdrove the car into the gravel on the penultimate turn. Denny Hamlin finished second, making it a 1-2 finish for Joe Gibbs Racing.

As of April 2020, Stewart’s tally of five wins in this event stands as a milestone that will prove difficult to beat. That said, some NASCAR drivers do get a feel for certain tracks – such as Denny Hamlin at Daytona – and this milestone victory undoubtedly played its part in seeing wagering prices for key NASCAR road events become more favorable for repeat winners with every passing year.

For anyone other than a true red-blooded American to win a race as prestigious this is the ultimate anti-climax. Juan Pablo Montoya has fulfilled this scenario twice before, and unsurprisingly, both of the former F1 driver’s previous NASCAR victories have come on road races. A victory at Sonoma in 2007 represented Montoya’s first win, and his 2010 victory at Watkins Glen came after consecutive top-ten finishes at the event in the preceding two years: 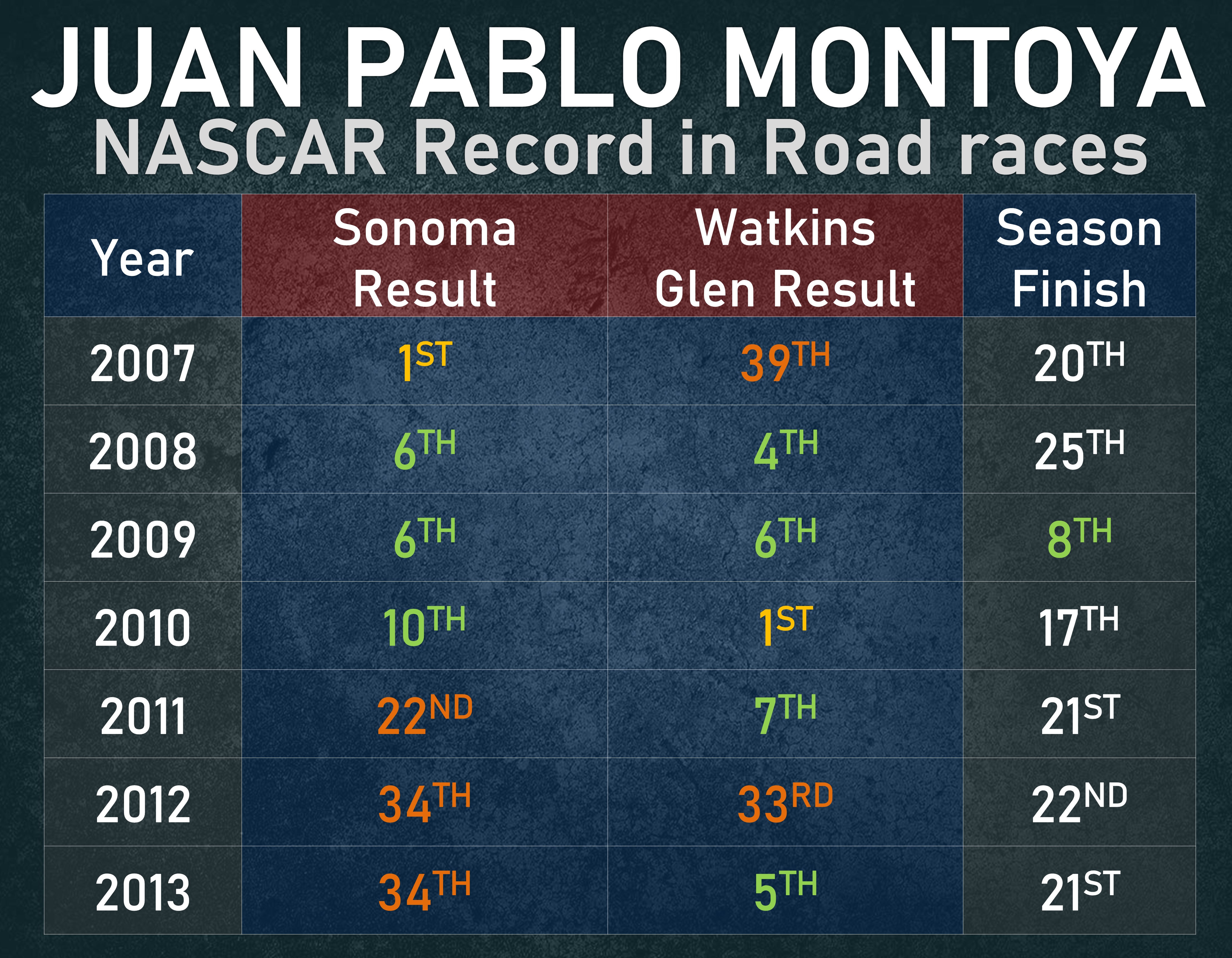 By 2010, Montoya had a true feel for NASCAR culture, and after switching to a Chevrolet managed by Earnhardt Ganassi Racing, gained momentum through top-five finishes at Atlanta, Phoenix, Talladega and Darlington. It was Carl Edwards who began this race in pole position though, vying with Jamie McMurray for the early territory.

After a disappointing start, Montoya – who once more used his prior experience of F1 to spot gaps in the field – took little time to get in front. He stayed there for a race high of 74 laps, but there was a late challenge from Kurt Busch in a race that had seen ten lead changes. At times, Busch was neck and neck with Montoya, but the Colombian’s skills won out.

As frenetic finishes go, the 2014 round of NASCAR action at the Glen takes some beating, and was yet another race at the circuit to see fans flocking in their droves. Kevin Harvick was leading the way in the championship standings by a comfortable distance, with Jeff Gordon, Denny Hamlin and Jimmie Johnson his nearest realistic rivals for the title.

In the end though, it was a battle between two underdogs that made this one memorable:

Jeff Gordon took pole position, next to Marcos Ambrose on the front row, and directly in front of title rivals Harvick and Johnson. A. J. Allmendinger, meanwhile, was a further row back in sixth. Allmendinger’s deployment so high up the field was something of a surprise in the context of the title race, but with three top-ten finishes in as many preceding appearances, he was a genuine contender for victory.

Gordon was strong in the first half, but as the second half loomed, he began to lose power. The big twist to proceedings came on lap 56, with a huge smash red-flagging the race. Greg Biffle colliding with Ryan Newman, and the latter man was sent hurtling into the barrier. Any attempt at recovery was halted by Michael McDowell, whose car T-boned Newman’s and provoked the red flag.

After an 80-minute delay, the race resumed, and with A. J. Allmendinger having reserved his fuel for the latter stage, had no difficulty in taking the lead. With five laps remaining, Marcos Ambrose was shadowing Allmendinger with real intent, and the two swapped places continually. However, a race fraught with danger was Allmendinger’s, and he racked up his first NASCAR victory.

In that aftermath, he had only this to say:

“I just wanted it so bad for them (the owners of JTG Daugherty Racing) and this team. They work so hard. I wasn’t gonna let Marcos take that from me.”

You may also want to check out the latest news about Red Bull to quit F1 on GranPrixTimes. They also provide the latest updates on F1 and NASCAR racing that you surely don’t want to miss out.