Victor Olofsson scored to give them a third-period lead, but the Buffalo Sabres were only able to come away with a point in a 3-2 overtime loss to the Calgary Flames in KeyBank Center on Wednesday.

It was a tightly contested contest leading up to Olofsson’s goal, which made the score 2-1 at the 1:55 mark of the final period. Matthew Tkachuk buried a loose puck around the Buffalo net to tie the game less than three minutes later, then Elias Lindholm scored the winning goal 1:17 into overtime. 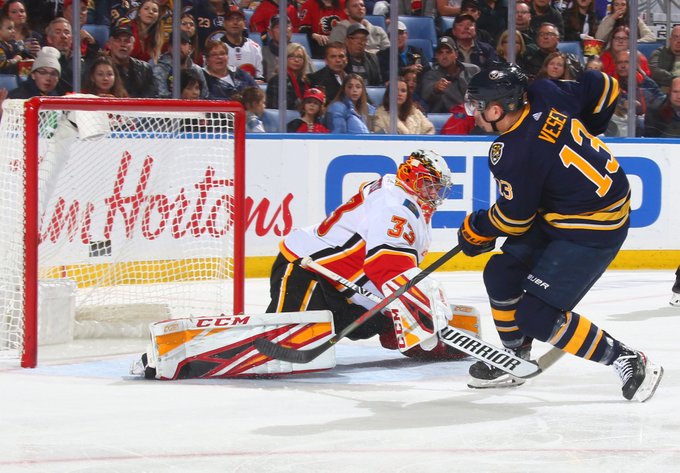 The Sabres outshot the Flames, 36-29. Even-strength scoring chances were also in their favor by a tally of 28-22, according to NaturalStatTrick.com.

“It’s definitely frustrating, the final result,” Sabres coach Ralph Krueger said. “I thought it was a well-played hockey game for a neutral observer, they would have said it was a good game. It was tight. Calgary played well, played hard.

“But we definitely had the chances to put it away after the 2-1 [goal] and the inability to do that and then have a D-zone breakdown to allow them back into the game is really, really disappointing. Again, it’s a painful situation that we have to manage and use in the right way.”