On Monday students and stakeholders from the Auburn Enlarged City School District turned over 841 signed petitions to New York State Senator Pam Helming, a Republican, with the goal to see critical fixes made to K-12 funding methods.

Ian Phillips, a school board member and NYSUT’s Regional Political Organizer joined students and parents to call for increased funding in the Governor’s budget for Cayuga County’s city district.

Phillips says the funding system is broken. In fact, he says that the funding problems are more than a decade old. He cited several district responses to a lack of funding over the last several years. 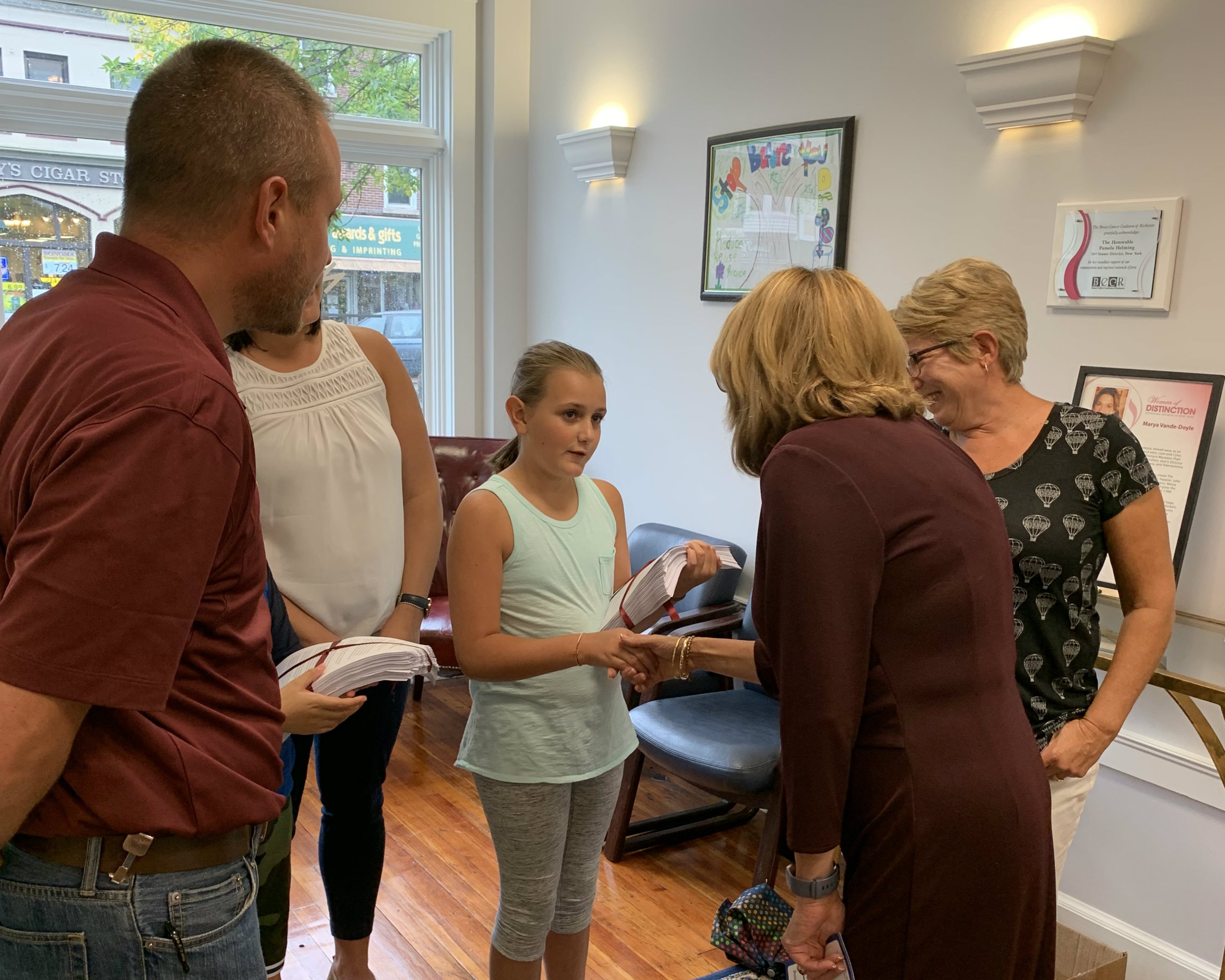 “Auburn schools have been underfunded for over a decade by New York State. There isn’t one catalyst necessarily, but a number of them; closing a West Middle School, laying off 20% of our staff, increasing class sizes, reductions in art, music, and library time,” Phillips explained on Monday. “Each year that we fail to receive equitable funding leads to more and more dire cuts, we cannot afford another year of inaction on fixing the broken funding formula.”

Sen. Pam Helming agrees. “The budget that was passed this year by the two downstate led majorities and approved by Governor Cuomo, shortchanges many upstate schools. One of the many reasons I voted against this disastrous budget was because of the toll it would take on Auburn’s students and teachers,” she explained.

Helming called on Gov. Cuomo to restore balance to the funding model in New York for districts across the state.

“I will continue to work with Senate Education Committee Chairwoman Shelly Mayer and will continue to advocate on Auburn’s behalf on this important issue,” Helming added. “It is such a positive that so many educators, students, and parents are joining together to support me in the effort to achieve fair and equitable funding for Auburn. This is not a Democrat or Republican problem, it is an issue that impacts the future of our entire community.” 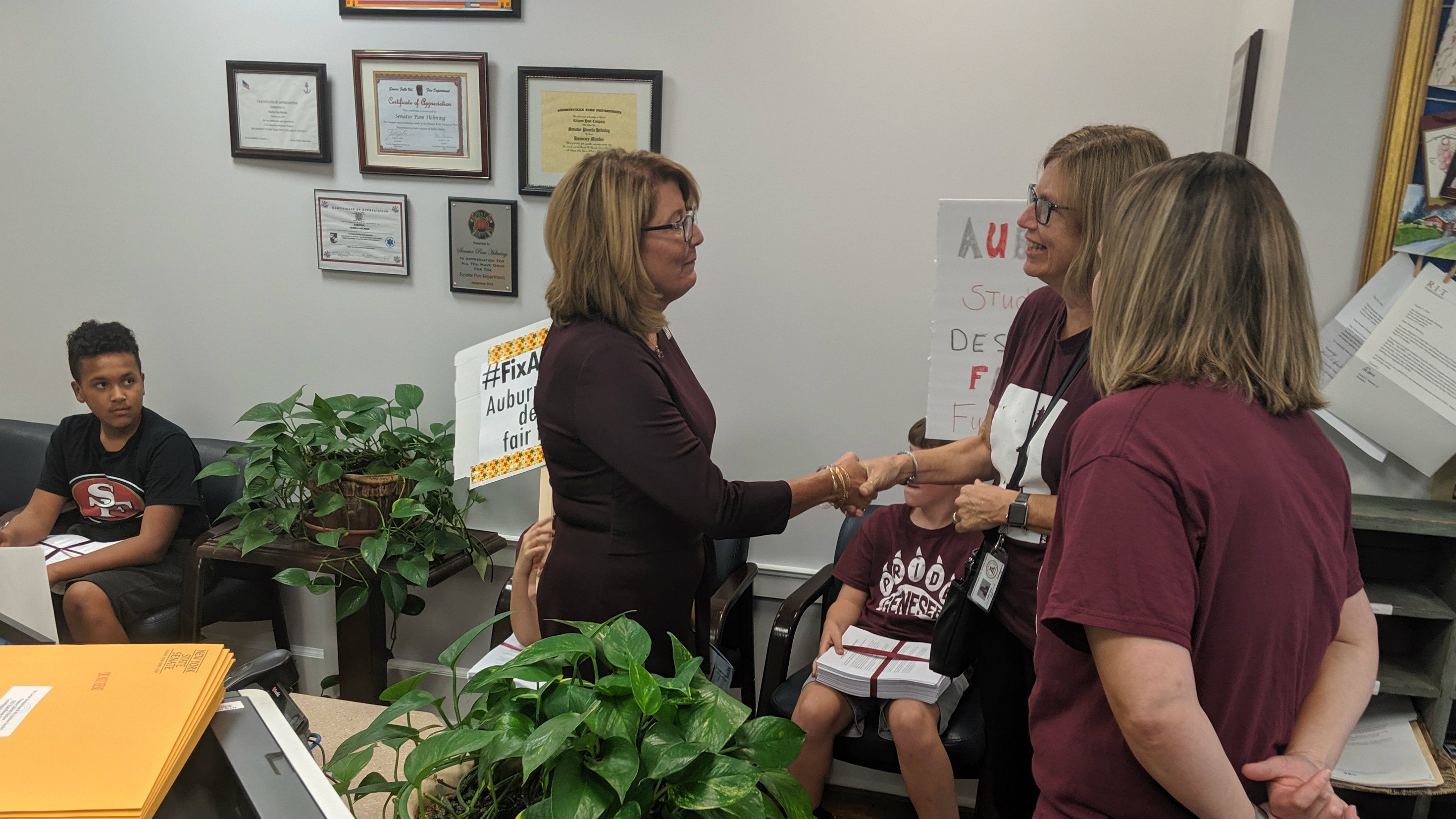 Funding equates to programs, smaller class sizes, and better opportunities for students. Something that could be lacking in the future if the funding model doesn’t change.

“It means bigger class sizes, fewer ‘specials’ like art and music. I also means that we can’t provide the social and emotional supports that our student’s need to succeed – an inadequate number of counselors and social workers, not enough aides for children with special needs,” Phillips added. “All of these areas are on the chopping block year after year; if it continues we will have to start having conversations about half-day kindergarten or cutting extracurriculars like sports.”

The bottom line is that district spending per student is significantly less than state average. In fact, it’s approximately $6,000 less per student than the state norms. Phillips says it’s unfair and inequitable. “Year after year however, the gap between neighboring districts and Auburn grows and grows. We need a fix to the funding formula districts like ours and for the new formula to be fully funded,” he concluded.

Adding complexity to the matter is a May 2019 report published by FingerLakes1.com, which showed widespread decreases in overall enrollment across the region’s school districts. For Auburn, enrollment had declined more than 28% between 1979 and 2019. Below is a copy of text from the petitions delivered to Sen. Helming:

We, the students, faculty, staff, parents and community of the Auburn Enlarged School District, implore you to fix the state’s current education funding formula. As we have previously written, our district spends just $18,273 per pupil, over a quarter less than the state average of $24,712. This years state budget, like those over much of the last ten years, have widened instead of shrunken that gap. Our costs, healthcare, building maintenance, transportation, BOCES contributions, are all the same as our neighboring districts despite having 26% less in per pupil funding.

As a result, our district has had to make deep cuts, including nearly 20% of our instructional staff and the closure of a school building. This has meant larger class sizes for our students and a reduction in their opportunities across the board.

These cuts come at a time when school security needs and an increase in student mental health issues have required additional funds. Our graduates are facing an increasingly competitive global job market. We fear that we will be unable to prepare adequately prepare them with the continuation of our existing budget crisis.

Our district’s taxpayers continue to support our school budgets with overwhelming margins but given the current law, they will be penalized if and when we ask them to do more. Given the continued failure of the state to address our extreme and dire situation, and the deep cuts we have already made, the District is spending down almost the entirety of its reserves this year.

Next year, without funding equity from the state, our community will face an even larger set of consequences including larger staff cuts and elimination of remaining non-mandated programs like sports, art and music and perhaps even full-time Kindergarten.

We in Auburn believe strongly in the power of our public school system and its ability to enrich the lives of our students and the broader community. Please don’t let another year go by without addressing the flaws in the funding formula that are preventing our educators from doing their jobs and our students from reaching their full potential.