Rep. Tom Reed says his collapse on Thursday afternoon was the result of an undiagnosed case of pneumonia.

The Republican, who has represented parts of the Southern Tier, Finger Lakes and Western New York in Congress since 2010, had collapsed around 1:30 p.m. in the Cannon Rotunda of the Capitol Building shortly before he was scheduled to speak with Fox Business.

“Thank you to everyone for their thoughts and prayers. After my evaluation by the doctors at George Washington University Hospital, it turns out I had a previously undiagnosed case of pneumonia. I look forward to returning to work on Monday,” Reed said in a statement.

Congressman Tom Reed collapsed in the Cannon Rotunda of the Capitol Building Thursday afternoon. Reed was about to do an interview with Fox Business Network at the time of the incident. Reed was reported to be unconscious for about 30 seconds but was also reported to have regained consciousness and was speaking with staff of Fox Business and Capitol police officers who arrived on the scene. 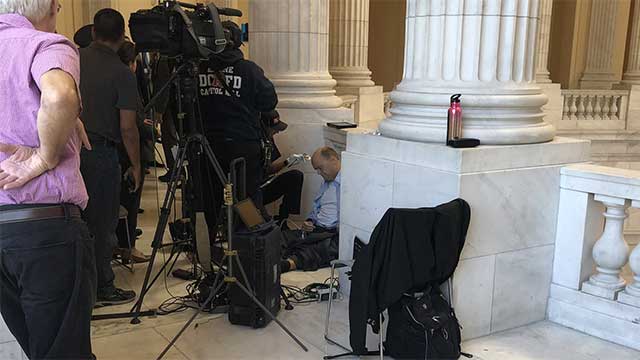 As of 2:00 pm paramedics arrived on the scene and were working on Rep. Reed.

“I’m back,” Rep. Reid said to police officers who came up to assist him. He is speaking and conscious. pic.twitter.com/2nOFb1WXaT

Paramedics are checking Rep. Reed’s vitals now. He was unconscious for about 30 seconds or so after he hit the ground. He was moments away from a live television hit, but thankfully that moment did not happen on-air. pic.twitter.com/eodpigOvg2

FingerLakes1.com will have more information as it becomes available.