Doubledays offense breaks out in win over Scrappers

After two straight nights of tough losses against the Scrappers, to be able to score 10 runs against Mahoning Valley was definitely what Auburn needed before their three-game road trip against the Renegades.

The Doubledays 10-5 win not only showcased their bats, but also the versatility of pitcher Evan Lee, who was making his first professional start. 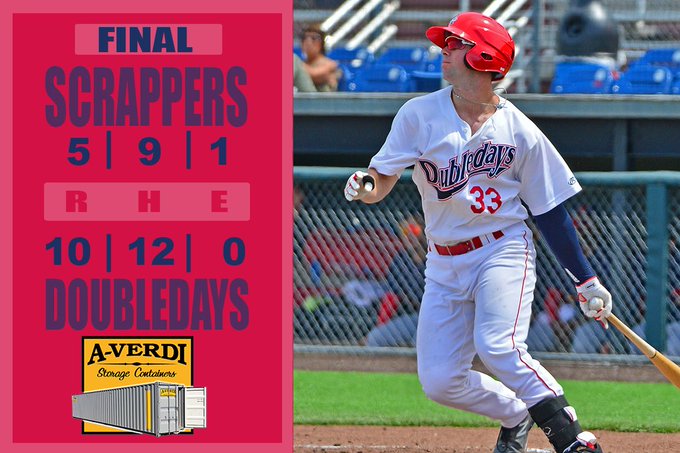 Entering the contest with a 2.85 ERA over nine relief appearances, the Arkansas product had a hard time finding his groove to start off the game. He opened the inning with a leadoff single and allowed a four pitch walk to Raynel Delgado with one out. Lee induced a pop out for the second out of the inning, but couldn’t escape unscathed as Johnathan Rodriguez knocked in the runner at third with a single.

But the Doubledays offense made sure that Lee would be given plenty of run support for the rest of his outing, despite being put in an early 1-0 hole.

Auburn’s bats jumped all over Scrappers starting pitcher Jhonneyver Gutierrez, starting with Ricardo Mendez’s in the leadoff spot. Mendez’s bat stayed hot after going 2-for-3 Saturday night, setting the table with a single to start off the home half. Jeremy Ydens moved him over to second base on a single, and both of them scored on a stand-up triple by Caldioli Sanfler to take the lead, 2-1. The extra base hits piled on for the Doubledays as Onix Vega doubled in Sanfler and J.T. Arruda notched Auburn’s second triple of the inning. Albert Carrillo topped off the scoring frenzy with an RBI single to center field.

The Doubledays kept the flame under Gutierrez in the second inning by driving in two more runs. Mendez — leading off for the second straight inning — continued his hot streak with another single. Two hit-by-pitches later, Auburn was once again in action against the Scrappers with the bases juiced for Vega. The bat didn’t even need to leave Vega’s shoulder, however, to score another run, as a wild pitch brought in Mendez to make it 6-1. Jose Sanchez kept the inning rolling with a sacrifice fly to tack on another run.

ICYMI: The bats came alive in a 10-5 win for the Doubledays in the series finale against the Scrappers. @jack_mcmullen11 and @JDRaucci give you the progression.https://t.co/pFnljnvk63

Back on the mound for the Doubledays, Lee returned to the shutdown arm that the Auburn faithful had been used to seeing. He struck out two batters in his second inning out and retired the side in the third, exiting the game with a comfortable 7-1 lead.

That lead grew to 8-1 in the fifth inning on an RBI single by Andrew Pratt, and then 10-1 in the seventh when Pratt launched his first professional home run to left center field.

But Mahoning Valley would not go down without a fight. The Scrappers dropped four runs on Doubledays reliever Pearson McMahan before he had to be pulled for Tyler Yankosky. The Scrappers rally ended there as Yankosky recorded the last out of the inning for the Doubledays’ 10-5 win.

The Doubledays will be back in action Tuesday on the road against the Hudson Valley Renegades.