Three hits to win a baseball game. On Sunday evening, it was as simple as that. In a back-and-forth, low scoring affair, the Auburn Doubledays (13-16) dropped their second straight contest to the Lowell Spinners (20-8) 3-2.

The game started in a startling manner: it was completely dominated by Doubleday pitching for the first six innings. Auburn’s staff combined to throw hitless baseball for the first two thirds of the game. LHP Alfonso Hernandez was the D-Days’ starter tonight, he was masterful, dealing 4.0 IP of shutout and no-hit baseball, striking out three and walking two.

The scoring started by way of the Doubledays, and it was from an unlikely source. The nine-hole hitter, LF Eric Senior, singled on a two-out ground ball to left field which plated 1B Albert Carrillo, who walked, in the top of the fourth inning. But after Senior’s RBI, a pattern started to brew. 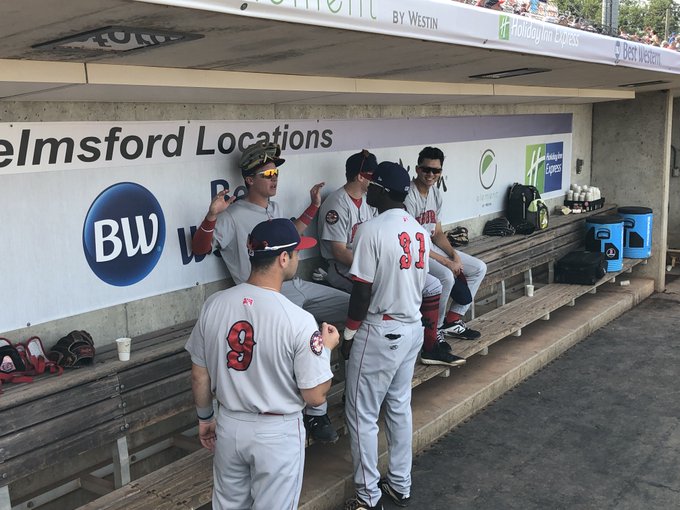 In the fifth, Lowell retaliated. Without registering a single base hit against RHP Davis Moore, the Spinners got on the board following a pair of walks, a wild pitch, and a sacrifice fly from Jecorrah Arnold.

In the sixth, it was Auburn that re-took the lead. Carrillo belted his second home run of the season, and his second of July, to the opposite field over the right center field wall. That blast made the lead 2-1 for the Doubledays, until the seventh.

Post-seventh inning stretch was when Lowell actually got loosened up. They recorded their first two base hits of the night, which set up beautifully for Ricardo Cubillan to put a ball in play. He did just that, and plated Lowell CF Marino Campana to knot the game at two.

It was just like the fifth set of the Gentlemen’s Final at Wimbledon earlier on Sunday: someone is going to win. In the bottom of the ninth inning, Lowell started off with a bang. Wil Dalton belted a triple to dead center field, which put him in pristine position to come home a happy camper on a ball in play. That ball came from Nicholas Northcut’s bat two pitches later, and a fly ball to center field was too far for Auburn CF Caldioli Sanfler to make a play on the streaking Dalton, who scored on Northcut’s walk-off sacrifice fly.

Auburn outhit Lowell 12-3 in the game, but lost 3-2 on a sac fly. Baseball, right? The Doubledays hope to avoid the sweep tomorrow night against the Spinners in Game Three. First pitch is at 7:05 p.m.

Be sure to tune in to J.D. Raucci starting at 6:55 p.m. tomorrow for pregame, followed by the game, on FingerLakes1.com Radio.