The Department of Corrections and Community Supervision (DOCCS) has released a statement after local officials criticized the department for a lack of communication after parolee and convicted rapist Christopher Block cut off his ankle monitor and evaded capture for 35 hours.

In a statement from DOCCS spokesperson Thomas Mailey, the department says that “contrary to reported information and inaccurate public statements and tweets by certain local officials, all law enforcement agencies were duly notified via the National Crime Information Center, APB/BOLO, as well as through personal notification from DOCCS staff.”

The Cayuga County Sheriff’s office had criticized DOCCS in a Facebook post, saying, “not only should our local law enforcement agencies have been, and continue to be updated and kept in the loop of this ongoing investigation, the public should have been notified about this dangerous fugitive’s status much earlier.”

DOCCS’ statement, in a seeming response to the pointed criticism, says that “notice to the public was limited so it did not cause panic or unduly compromise the early stages of the search and force the absconder to go deeper into hiding.”

The department also says that while local officials called off their contributions to the search due to personnel shifts ending during the search, “DOCCS and NYSP continued efforts unabated, ultimately culminating with Block’s capture, with the significant assistance of NYS DEC.”

Trash, a lighter and a white tarp. That’s part of what can be seen at a small campsite investigators say was set up by paroled rapist Christopher Block, who was captured after a 35-hour search.

The escaped parolee and convicted rapist was found in a makeshift shelter in the woods next to the Skaneateles Country Club, investigators said. Block was found around 8:30 a.m. Friday after a 35-hour search. 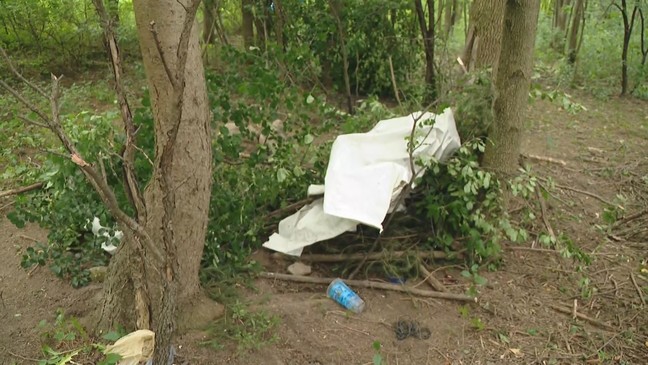 New York State Department of Environmental Conservation Police Officers with K9s were searching a wooded area near the country club when they found Block in a makeshift shelter, a spokesperson said.

The DEC spokesperson described the shelter as a “lean-to.” Video taken by CNYCentral shows trees and branches tied together and covered by a white tarp.

There was a lighter and signs of a fire.

Paroled rapist and kidnapper, 61-year-old Christopher Block, who was on the run for 35 hours after cutting off his ankle bracelet was captured this morning on the grounds of Skaneateles Country Club.

Block had been on the run since Wednesday evening when he cut off his GPS ankle monitoring bracelet. The ankle monitor was found in the weeds near a residential area in the Village of Skaneateles. The New York State Department of Corrections and Community Supervision was first alerted the bracelet had been removed just before 10 PM Wednesday night. 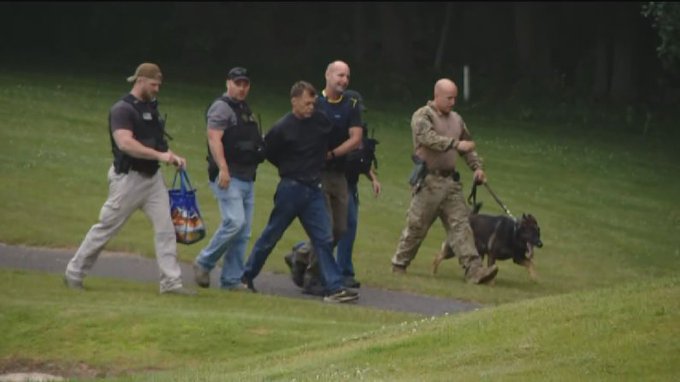 Block was arrested around 8:30 AM Friday morning, according to Skaneateles Police Chief Dan Coon and confirmed by Onondaga County District Attorney William Fitzpatrick.

Block was captured by four state Department of Environmental Conservation officers on the edge of woods along the golf course, police on the scene confirmed. The officers and two DEC dogs were part of the manhunt for Block.

The New York State Department of Corrections and Community Supervision reports that the search is still on for convicted rapist Christopher Block.

Block, out of prison on parole since December, cut off his ankle monitor in Skaneateles, according to Sgt. Jon Seeber, a spokesman for the Onondaga County Sheriff’s Offices.

In a statement to NewsChannel 9 Thursday night, a spokesperson for NYSDOCCS said:

“The search is active, ongoing and intense. It is comprised of multiple law enforcement agencies working together around the clock to find this individual.”

Local law-enforcement agencies are saying they are out of the loop on the alleged search.

“It appears Onondaga County Sheriff Gene Conway and I share the same frustration. Not only should our local law enforcement agencies have been, and continue to be updated and kept in the loop of this ongoing investigation, the public should have been notified about this dangerous fugitive’s status much earlier. This is inexcusable.”

“The focus now is to find this fugitive and get him in custody so that the community can feel safe.”

A Syracuse Post-Standard article from 1984 said Block kidnapped the two women, raping one and sexually abusing the other. He was 26 at time of his sentencing. The article explains why Block was once called dangerous, ‘totally amoral’, and how he threatened to kill a judge.