State-ordered groundwater tests for a class of cancer-causing chemicals known as PFAS have been conducted at 140 sites across the state, but the tests results — and even the locations of the testing — are being held under wraps.

PFAS (per- and polyfluoroalkyl substances) are commonly found in foams used to fight petroleum fires and in a wide range of household products, including Teflon and Scotchguard. They are an urgent nationwide health threat with danger levels in drinking water measured in parts per trillion.

The groundwater tests were prompted by results of a voluntary statewide survey launched in 2016 of airports, fire training sites, manufacturers and others facilities that “used, stored, disposed of or manufactured PFAS-containing materials.”

“Facilities mapped within a half-mile of a (regulated public water supply) or private supply well were evaluated in greater detail for possible well-sampling,” the DEC said in a statement to WaterFront last week.

“Sampling has included testing of existing wells on the facilities and public and private wells proximate to the facilities,” the agency added. “As of December 2018, at least one sampling event has occurred at or near all 140 that require sampling.”

The DEC declined to provide a list of the 140 sites or details of the test results to WaterFront, which has filed a Freedom of Information Law request for that data. But a response could take weeks or even months and won’t necessarily provide all the information requested.

PFAS burst into view as a toxic threat in New York State in late 2015. That’s when the U.S. Environmental Protection Agency ordered officials in Hoosick Falls, a village 30 miles northeast of Albany, to tell residents that it was unsafe to drink from the public water supply. 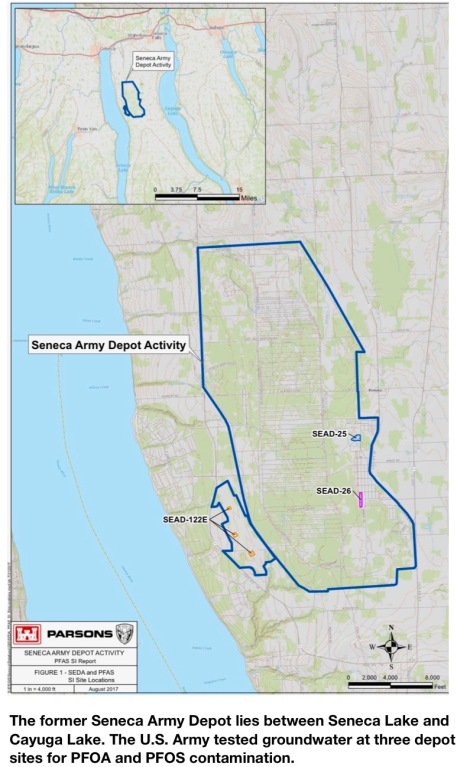 For several months, local and state officials downplayed the problem until the  EPA’s federal order forced their hands.

Since then, Hoosick Falls has been declared a superfund site. Its water supply is now filtered by equipment supplied by the plastics company that’s been blamed for the contamination, Saint-Gobain Performance Plastics.

Meanwhile, the state Department of Health has offered free blood tests for those “who wish to participate.” But the DOH has been stingy about providing details of risks to drinking water at other sites.

For example, DOH has not responded to a March 1, 2019 letter from the environmental group Seneca Lake Guardian requested an update on a DOH-confirmed PFAS groundwater plume in Romulus that is “moving south and southwest toward Seneca Lake.”

Neither did the agency respond to a list of questions on PFAS from WaterFront on April 8. The agency’s spokesperson, Erin Silk, had said, “I’ll have these for you today,” on April 10, and, “This information is being finalized” on April 11, but then went silent.

Meanwhile, the DEC asserts that the Cuomo Administration has been moving aggressively, if quietly, to combat the PFAS threat.

— On April 5, state officials approved a plan sponsored by the U.S. Department of Defense to further investigate the Romulus plume that may threaten Seneca Lake. Work is expected to begin the week of May 6, the agency said.

— As of December 2018, the state had collected more than 32,000 gallons of fire-fighting foam from municipal fire and emergency response departments.

— Gov. Andrew Cuomo’s Drinking Water Quality Council, formed in September 2017, recently set a health advisory level of 20 parts per trillion for PFOA and PFOS, two common PFAS substances the state classified as hazardous in 2016. That equates to roughly one drop in an Olympic-size swimming pool. The state health limit is well below the EPA’s health advisory threshold of 70 ppt for those two substances.

— The DEC is requiring responsible parties statewide to sample their “legacy superfund sites” (those deemed a significant threat and those classified as cleaned up) for PFAS and 1,4-dioxane for possible further remediation. “Of the nearly 1,500 legacy sites for which sampling has been required, nearly half have completed groundwater sampling and 33 percent have completed the assessment of need for further action,” the DEC said.

But the state and federal rules governing the PFAS class of chemicals are limited and advisory rather than strictly enforceable.

And they only address two of the dozens of chemicals in the PFAS family. While manufacturers have been phasing out PFOA and PFOS, they may yet turn to other PFAS variants that aren’t regulated at all, health advocates warn.

In 2016, federal and state officials launched comprehensive surveys aimed at outlining the scope of the PFAS problem.

The Department of Defense ordered groundwater tests at 664 military sites across the country where firefighting foam had been used. Test results showed highly elevated levels of PFOA and PFOS at the former Seneca Army Depot in Romulus and at several other military sites in the state — up to 92,900 ppt at one Romulus site, or more than 4,600 times the state health advisory level.

The state DOH has acknowledged testing 22 private wells in the vicinity of the depot’s hot spots and found that no water samples exceeded the federal limit. But two private wells on a dairy farm to the south and west of the high contamination zone reportedly tested at 40 ppt, twice the state limit.

The DOH declined to respond to a question from WaterFront on whether it had conducted studies on PFAS contamination of deer, fish, cattle or crops. Other states have conducted such studies on plants and animals.

Neither did the DOH say whether it had notified the public or local officials at any of the 140 sites where the DEC had recently mandated drinking water tests.

Even if tests at some of those sites show elevated levels of PFOA and PFOS contamination, the health risk to those communities is not at all clear.

The DOH said last May that it had found no statistically significant increase in the types of cancers associated with PFAS exposure around Hoosick Falls, where tests showed PFAS levels ranging up 540 ppt, or 27 times the state’s health advisory limit.

But as WaterFront reported in November, canvassers working in a Bennington College survey of the Hoosick Falls area found 31 incidences of kidney cancer, 11 cases of testicular cancer, 231 people with thyroid disease, 71 incidents of ulcerative colitis and 35 cases of pregnancy-induced hypertension.

While neither the DEC nor the DOH are commenting on which communities have been targeted for water sampling to screen for PFAS contamination, it is possible to make educated guesses about likely targets.

The raw survey results are available on the DEC website. They include lists of the facilities that acknowledged using, storing or manufacturing PFAS.

For example, Finger Lakes airports in Rochester, Syracuse, Binghamton, Ithaca, Elmira, Penn Yan and Canandaigua all answered yes when asked whether they had stored a class of firefighting foam likely to contain PFAS. The Elmira, Ithaca and Rochester airports admitted they also used it. 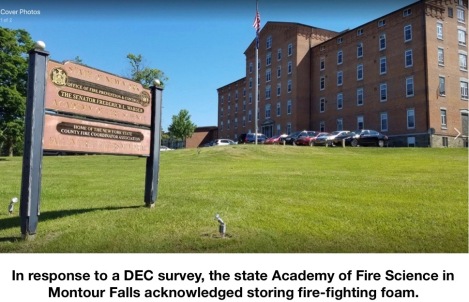 Fire training centers in Binghamton, Ithaca and Syracuse, among others, acknowledged both storing firefighting foam and using it in training exercises.

The New York Academy of Fire Science in Montour Falls admitted storing the foam, but said it didn’t know whether it had ever used it or if it had ever been spilled or leaked.

Among manufacturers in the greater Finger Lakes region, several Eastman Kodak Co. sites in Rochester admitted both storing and using firefighting foam, as did Simplex Manufacturing in Auburn and Surface Finish Tech. in Elmira, among others.

The suit cites reported PFOA and PFOS contamination at airport, industrial and firefighting training sites around the state, including  Momentive Performance Materials in Waterford, SI Group in Rotterdam Junction, AMRI Rensselaer and Empire Generating in Rensselaer, the Floyd Bennett Memorial Airport in Warren County, and at the Hamilton County Fire Training Center in Lake Pleasant, in the Adirondacks.