Syracuse will play their opening round game of the 2019 NCAA tournament on Thursday night, and potentially the entire tournament if they advance, without senior point guard Frank Howard as the school announced that he’s been suspended indefinitely. Now, sources say the suspension was due to a failed drug test. 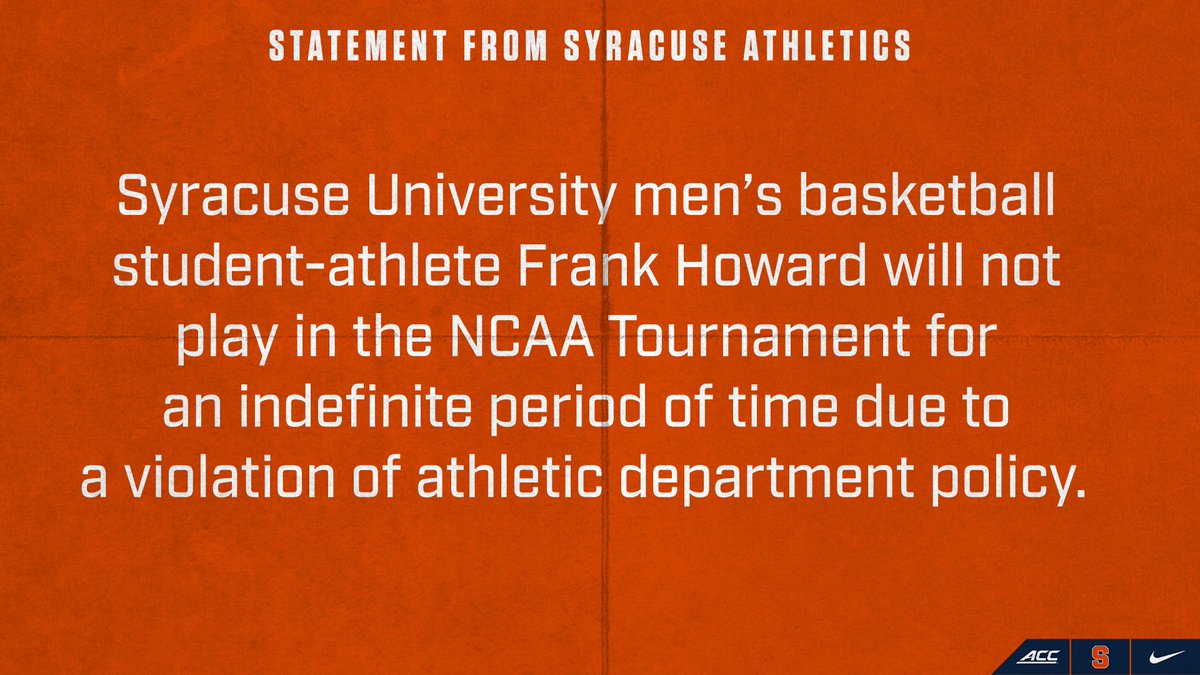 THE DAILY ORANGE REPORTS THAT THE SUSPENSION WAS DUE TO A FAILED DRUG TEST:

Syracuse senior point guard Frank Howard has been suspended indefinitely because he failed a drug test before the NCAA Tournament, three people familiar with the situation told The Daily Orange on Wednesday night. It is unclear when the testing took place.

“The NCAA conducts testing at its championships, and year round on campus in Division I and II programs,” according to the NCAA website. “In addition, the majority of institutions conduct their own institutional testing programs independent of NCAA drug testing.”

Breaking: Syracuse's Frank Howard will not play against Baylor in NCAA Tournament https://t.co/72d7sovhjT

Some not so great news about Frank Howard. I’m sure more details will start to come out soon, but for now:

Starter Buddy is back and here to stay #CuseByAMillion

Frank Howard will not play in NCAA Tournament for an indefinite period of time due to violation of athletic department policy pic.twitter.com/UF770fNN7A

SU officials say Sr. Guard Frank Howard will not play Thursday night and is out of NCAA Tournament indefinitely due to violation of athletic policy. Our @MLarsonSports is in SLC with team and will provide more as game time vs Baylor approaches Thursday night. More @SPECNewsCNY pic.twitter.com/NUy8JCEkkb

No. 8 seed Syracuse opens the NCAA tournament with a matchup against No. 9 seed Baylor on Thursday night as they play in Salt Lake City in a game that will tip at 9:57 p.m. EST.