Although this year’s Geneva High School valedictorian will spend the next few years in Boston, she may someday find herself walking the halls of her alma mater again. En-Ya Shen’s next time at Geneva High School, though, she could be the teacher instead of the student, or even, someday, the superintendent. 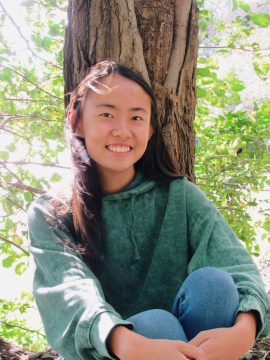 En-Ya Shen, the daughter of Wei Shen and Yingzhen Yang, will attend Boston College in Massachusetts for secondary education, and plans to begin her career teaching — probably math, she says.

En-Ya also plans to pursue the arts in college, possibly joining a dance team. Her experiences in Geneva High Drama Club and at St. Peter’s Community Arts Academy contributed to that love.

In considering teachers who had shaped her experience at Geneva, En-Ya was hard-pressed to single out just one, but gives special mention to Stacey Baxter, her middle school English language arts teacher, and Julie Bailey, middle school physical education teacher. 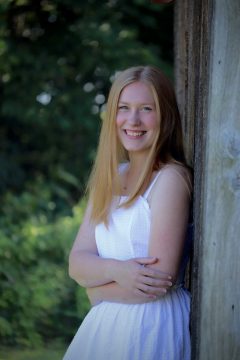 This year’s Geneva High School salutatorian, Sally Young, hopes to combine a variety of passions into one to build her future.

Sally, the daughter of John Young and Erin Griffiths, will attend Dartmouth College in Hanover, New Hampshire, where she plans to study writing and law.

Sally credits her approach to learning to her kindergarten teacher, Deborah Sindoni. A few other educators have helped her along the way, including, most recently, English teacher George Goga and music teacher Matthew Craig at Geneva High School.

In her time at Geneva High School, Sally has been a member of Dram Club, Interact Club, Math Team, National Honor Society, Varsity Singers and also secretary of the Class of 2022, as well as a member of cross country and track and field. She has received awards and recognition in as a National Merit Commended Student, the American Math Competition, a Chemistry Award, an AP Scholar of Distinction and a Sliver Key Scholastic Writing Award. She has volunteered with Geneva Do Something Club, Our Lady of Peace Parish, Interact Club and National Honor Society.