After a summer-like weekend across the Finger Lakes region, the risk for severe weather will be followed by significantly cooler temperatures the first few days of the week.

The Storm Trackers Team says things will get active for some on Monday- then calm down with more seasonable temperatures and relatively clear skies.

When is the strong to severe weather most likely?

It’s not a slam dunk, but Jack Matthys, founder and forecaster for the Storm Trackers Team says a strong cold front will move through the area on Monday.

“This front will interact with a warm and humid air mass currently in place to produce the potential for scattered strong to perhaps severe thunderstorms from late morning into the afternoon before moving east,” he said.

The main threat from these storms will be damaging winds, frequent lightning, heavy rain, and hail- all of which is standard for summertime thunderstorms.

There’s a non-zero chance of a thunderstorm. Not at all something most should be concerned about- but Matthys admits that it’s something that should at least be monitored.

The front should move east of the region by the early afternoon hours. 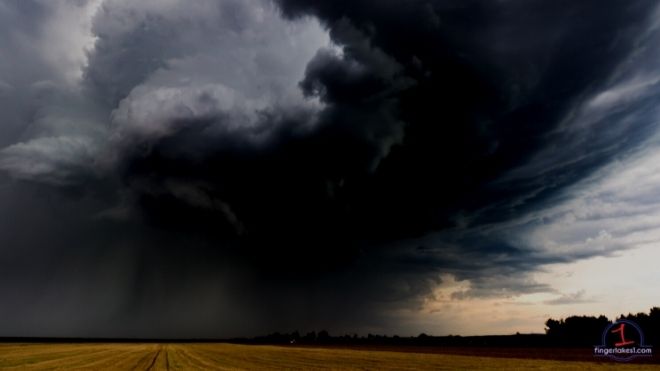 What happens after the cold front passes?

The sever weather threat will end as soon as the storms pass. Cooler, drier, and more stable air will move in behind the front- and that will mean a crisp evening, and cooler daytime temps through the Wednesday-Thursday timeframe.

Temperatures will hover in the low-to-mid 60s through mid-week.

What about getting on the lake this week?

Many found time to get out on the water this past weekend, as temperatures pushed through the 70s.

Matthys says anyone heading out onto the lakes Monday should exercise caution.

“When driving through any stronger thunderstorms on Monday, drivers should be aware of damaging winds, blinding rains and some hail. Boaters on any of the area lakes will want to be aware of the threat for thunderstorms,” he said.

It’s never too early to start thinking about the weekend- especially this time of year.

Matthys says temperatures will be significantly warmer by the weekend compared to Tuesday and Wednesday.

9 hours ago
Federal stimulus checks are a thing of the past, and now states are stepping up to offer residents payments as ... MORE

9 hours ago
California is one of the first states in the U.S. to offer food stamps to immigrants living in the country ... MORE