A fourth-grader enrolled in The Center for Instruction, Technology & Innovation’s (CiTi) STRIVE program took part in the viral #BettyWhiteChallenge to assist animals at the United Friends of Homeless Animals (UFHA) of Richland.

William, who attends school at the program housed within Lura M. Sharp Elementary in Pulaski, solicited over $200 in donations from the building’s students, staff and faculty, along with food and blankets, as part of his new year’s resolution to be a voice for voiceless animals in his community.

Betty White’s death, announced after his project was hatched, encouraged William in his efforts even more once he learned that “The Golden Girls” actress shared a similar love for animals.

“Animals deserve as much respect as humans do,” he said.

CiTi STRIVE Social Worker Angela Christmas-Mattison helped William spread the word about his donation drive by assisting with fliers and collecting donations. Together, they traveled to UFHA on Jan. 17 to give what he had collected. 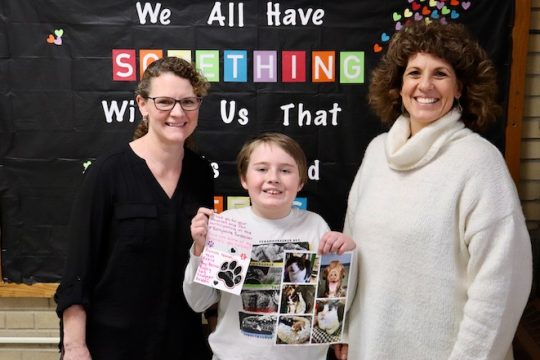 Following his visit to UFHA, the shelter sent William a thank-you note along with photos of specific individual animals that directly benefitted from his efforts.

“I think they were happy,” William added, noting he was delighted to have spent time playing with the sheltered kittens during his visit.

CiTi Principal of Exceptional and Alternative Education Carol Scaccia said William’s example can teach others an important lesson for all students:

“Just one voice can make a powerful difference.”