In 2021, DEC Forest Rangers conducted 426 search and rescue missions, extinguished wildfires, participated in prescribed fires that served to rejuvenate hundreds of acres of land, and worked on cases that resulted in thousands of tickets or arrests. Some of these incidents featured each week result in injuries, property damage, or even death, and starting this year, the “DEC Statewide Forest Ranger Highlights” is transitioning to a new title, “Forest Rangers – Week In Review.”

“Over the last decade, as well as during the COVID-19 pandemic, DEC saw an uptick in people visiting State lands to experience New York’s abundant opportunities for outdoor recreation,” said DEC Commissioner Basil Seggos. “DEC’s Forest Rangers are on the front lines to help visitors get outside responsibly and get home safely, as well as to protect our state’s irreplaceable natural resources. Rangers’ knowledge of first aid, land navigation, and technical rescue techniques are critical to the success of their missions, which for more than a century have taken them from remote wilderness areas with rugged mountain peaks, to white water rivers, and throughout our vast forests statewide.”

Town of Grafton
Rensselaer County
Public Outreach: On Feb. 18, Forest Ranger Jackson led a three-hour Map and Compass training session at the Capital District Sportsman Center in the town of Grafton. Nineteen people attended to learn how to read a topographical map, determine distances, plot points on a map, set an azimuth, and properly navigate using an azimuth with a compass. Students also learned how to be better prepared in the backcountry. Forest Rangers utilize these skills in search and rescue missions, wildland firefighting, and while navigating the backcountry on patrol.

Town of Lake George
Warren County
ATV Incident: On Feb. 22 at 12:30 p.m., Ray Brook Dispatch requested Forest Ranger assistance for a subject stranded on the ice in the Mother Bunch Islands area of Lake George. The 52-year-old from Florida was on an ATV and struck a heave in the ice, trapping the ATV. Rangers Kabrehl, Perryman, and Quinn, and Environmental Conservation Police Officer (ECO) LaPoint responded on an airboat. With 50-degree temperatures and rain, the ice was not safe for a snowmobile or ATV. Rangers brought the subject to safety and worked with ECO LaPoint to attempt to remove the ATV. The ATV was stuck too deep in the ice, so the responders attached ice buoys and a floating marker so they could return later when conditions are better to retrieve the machine. 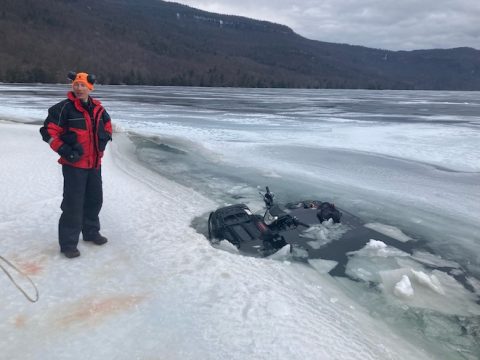 Town of Indian Lake
Hamilton County
Wildland Rescue: On Feb. 22 at 6:30 p.m., Ray Brook Dispatch requested Forest Ranger assistance after getting a 911 call from a skier who reported suffering a leg injury at the Griffin Brook Slide on Snowy Mountain, approximately one mile into the woods. Forest Ranger Scott responded to the scene with the Indian Lake Fire Department. The 36-year-old from Hamilton had hit a frozen branch under the fresh powder and broke his femur. Ranger Scott took a snowmobile up the unmarked trail and snowshoed the rest of the way, reaching the skier by 8:42 p.m. In addition to the broken femur, the skier was suffering from mild hypothermia and the onset of frostbite. Ranger Scott stabilized the injury and warmed the subject using heat packs and sleeping bags and worked with the Indian Lake Fire Department to package the skier in an insulated vapor barrier and sled. Once they reached the road, the subject was turned over to Indian Lake EMS for transport to Glens Falls Hospital. Resources were clear at 10:54 p.m.

Hamilton County
Town of Hope
Flood Response: On Feb. 24 at 10:55 a.m., Forest Rangers Scott and Lomnitzer returned to River Road in the town of Hope to help evacuate residents stranded due to flooding. Similar to last week, an ice jam blocking the Sacandaga River broke, causing an increase in water downstream and flooding multiple homes. Using a boat, Rangers Scott and Lomnitzer rescued four individuals and one dog. In addition, the Hamilton County Department of Emergency Services conducted welfare checks in the area. 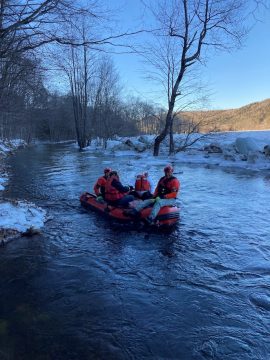 Franklin County
Town of Brighton
Training: On Feb. 24 and 25, Forest Rangers from Region 5 participated in Wilderness First Responder training offered by Wilderness Medical Associates at the Paul Smith’s Visitor Interpretive Center. Rangers focused on assessing and treating hypothermia, something encountered often during the winter months in the backcountry.

Franklin County
Town of Brighton
Snowmobile Enforcement: On Feb. 25, Forest Rangers from Region 5 patrolled Franklin County snowmobile trails. The Rangers interacted with approximately 70 snowmobiles; one was ticketed. Rangers utilized radar to ensure riders were within the speed limits for the trails. Snowmobiling is one of the most popular winter activities in the North Country and Forest Rangers prioritize educating the public to help ensure compliance with important public safety requirements.

Lewis County
Town of Greig
Snowmobile Accident: On Feb. 26 at 12:55 p.m., Forest Ranger Evans heard a radio call for a snowmobile accident near Catspaw Lake. Ranger Evans was patrolling in the area of Burdicks Crossing about 10 minutes away and responded to the accident. The 41-year-old from Whitesboro was thrown off his snowmobile and hit a tree, suffering head trauma, neck pain, and chest pain. The snowmobiler was wearing a helmet at the time of the accident. Lewis County Emergency Management and the Glenfield Fire Department helped backboard the subject and package him on a rescue toboggan. He was transported to Lyons Falls Ambulance, which brought him to Saint Elizabeth’s Hospital for treatment. Ranger Evans, BECI Investigator Maneeley, and the Lewis County Sheriff collected information about the incident from the scene. Resources were clear at 4:45 p.m. 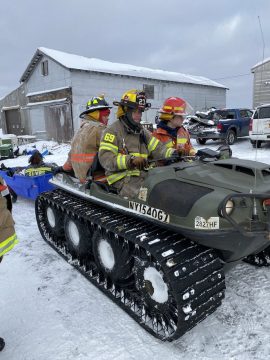 Hamilton County
Town of Wells
Public Outreach: Over the past few weeks, Forest Ranger Lieutenant Kerr and Ranger Thompson assisted the Hamilton County Sheriff’s Department with New York State’s snowmobile safety education program. Dozens of adults and children participated in the events, with the most recent program in the town of Wells. Participants learned about snowmobile rules and regulations, ride preparation, and riding skills. Participants heard firsthand from local law enforcement about the experiences encountered on trails and received hands-on training with snowmobiles and different emergency equipment.

Greene County
Hamlet of Elka Park
Wildland Rescue: On Feb. 28 at 9 a.m., Forest Rangers Allwine, Dawson, Gullen, and Mitchell responded to a call for an injured hiker who temporarily lost consciousness while camping with a group near Pecoy Notch. Rangers Allwine and Gullen made contact with the group at 12:20 p.m. The 23-year-old from Massachusetts advised he was feeling dizzy and nauseated. His hiking companions had food, but no water, and their stove was inoperable. Rangers provided the group with food and water and helped them back to the trailhead. Resources were clear at 2:45 p.m.