When I took office, Ralph Calabrese was one of the first people to visit me. He presented me with a poem he wrote, A Veterans Prayer. It’s hanging in my office.

Like so many in our area, I was saddened to learn of Ralph’s passing on December 5. At 93 years young, he lived a full and grateful life.

Ralph was an incredible person whom I greatly admired. A U.S. Army veteran of the Korean War, he was fiercely devoted to his fellow veterans and passionate about his community of Canandaigua. Many years ago, when the federal government recommended closing the Canandaigua VA Medical Center, Ralph launched an extensive grassroots campaign – organizing community rallies, collecting thousands of letters of support, speaking at hearings, and battling Washington. His leadership kept the Canandaigua VA open.

Ralph taught young people the importance of honoring our veterans. He inspired them to know and appreciate their sacrifice and contributions. For many years, I worked with Ralph and Canandaigua schools’ Athletic Director Jim Simmons to coordinate the football players and cheerleaders escorting veterans from the VA to Canandaigua Braves football games. The veterans were honored during the game and treated to hot dogs for lunch. It was always a great day for everyone.

Many people will remember seeing Ralph in July 4th and Memorial Day parades, riding in the green Army Jeep. Others will recall hearing him speak at Veterans Day events.

Forever the advocate, Ralph hosted a program on Finger Lakes Television at FLCC to bring greater awareness to veterans’ issues. I had the privilege of being invited on the show several times.

Ralph deeply loved Canandaigua and was recognized with the annual Mr. Canandaigua Award from the Chamber of Commerce. Retired State Senator Mike Nozzolio inducted him into the New York State Senate Veterans Hall of Fame. For his service in the Korean War, Ralph was awarded The Ambassador for Peace Medal. He also received numerous recognitions from local veterans groups.

Ralph was most often seen proudly wearing his Korea Veteran cap. His smile was infectious. He had a gregarious personality like no other. He was selfless and generous. He led with conviction. He fought for everything he believed in. And he loved America.

Ralph devoted his life to serving others, and he knew how much the community adored and respected him. I am better for having known Ralph and I am eternally grateful for his friendship, advice and support. I am really going to miss him.

Ralph passed away peacefully at the Canandaigua VA, the facility he served and saved.

Ralph’s poem, A Veterans Prayer, beautifully articulates the sacrifices service members make when they answer their country’s call. The final line reads: “Please Dear God, don’t let America turn its back on me.”

Ralph had everyone’s back. We can all honor him by continuing his commitment to our veterans and military families, and fighting for the benefits, support and respect they deserve.

May we all find inspiration in Ralph’s life of service. Godspeed, my friend. 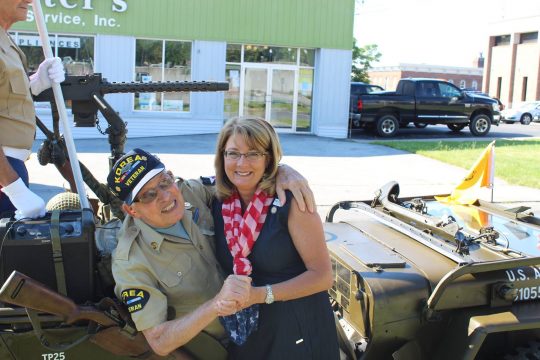