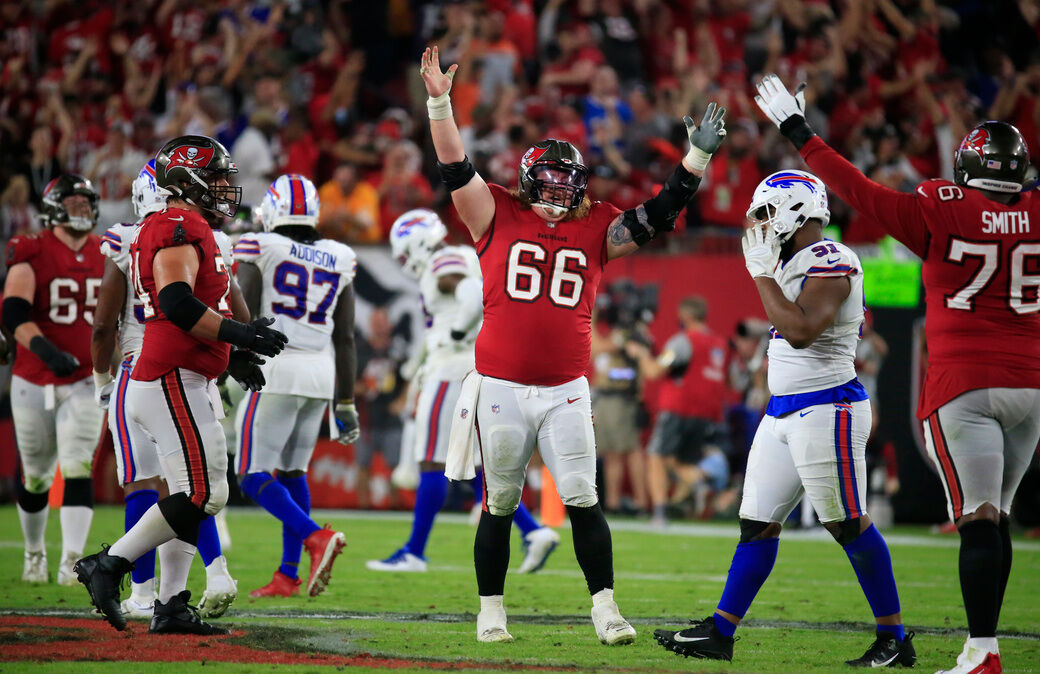 With the Bills looking to bounce back after the tough Monday Night Football loss, it seemed early on that the tune from last week hadn’t changed.  Coming out of halftime however, it was a different Bills team in the second half against Tampa Bay.  In the end it wouldn’t be enough, as the Bills fell 33-27 to the Buccaneers.

Josh Allen led the charge on offense for the Bills, willing the offense at moments going 36-54 in the passing game, collecting 308 yards with two touchdowns and a single interception.  Allen also led the team in rush yards, going for 109 yards on the ground on 12 carries, which included his third quarter visit to the end zone.  Perhaps the most surprising stat of all is the Bills failed to record a hand-off in the first half of play, a sign of the struggles they currently face on offense.

We're live after our loss to the Bucs, with comments from HC Sean McDermott, QB Josh Allen and more players.#BUFvsTB | #BillsMafia https://t.co/7Hb3Co5x8R

Josh Allen is the fourth player in #NFL history to record 300+ passing yards and 100+ rushing yards in a single game, per @NFLonCBS.

Allen's 28 passing touchdowns this season mark the third-most in team history in a single season, trailing only his own team record (37 in 2020) and Jim Kelly’s 33 TDs in 1991.

After that touchdown throw to Dawson Knox, Josh Allen has tallied his 20th career game with a passing and receiving touchdown.

That marks the second-most by an NFL QB in his first four seasons, behind Cam Newton (24).

Josh Allen: I’m proud of our team and how we fought in the second half tonight. That’s the resilient team that I know and love. #BUFvsTB pic.twitter.com/HWWTUrzDUR

Coach McDermott: I know we came up short tonight, but I love how this team fought. Tampa Bay made one more play than we did, but I’m proud of how we battled. #BUFvsTB pic.twitter.com/wnQ7tJxtxw

Josh Allen in a walking boot. Says he doesn’t know how serious but he finished game so doesn’t think it’s big deal. pic.twitter.com/7vsT6PQx9r

this angle is pretty wild https://t.co/igjXtVDgJJ

Bills QB Josh Allen will have MRI on left foot and ankle Monday after his courageous performance in the OT loss to the Bucs.
The Bills are hopeful but expect Mitchell Trubisky to get some reps in practice as they have vital 4-game run to finish season, starting w Panthers.

There are no moral victories in this game – Jordan Poyer #BillsMafia

This the Josh Allen I kno

Here is the ONE time there is no flag.#BillsMafia pic.twitter.com/5dRVlb3aXy

Between the #Sabres and the #Bills, it has been an absolutely bizarre weekend for Buffalo sports teams when it comes to officiating.

Still see Buffalo as among the most dangerous teams in the playoffs. The makeup and talent is there. The Bills just have to get in. Far from a slam dunk.

I was in the elevator with a bunch of Bucs reporters and one of them said to another that the Bucs will never play against a QB that good again unless they play the Bills or Chiefs in the Super Bowl.

You'll obsess about the last TD for good reason. And I always fan griping about officiating can get really old. But good lord, the PI calls in this game (or lack thereof) were just an absolute joke. Stripes have to be better than that.

Two hours ago it felt like the season was over. This loss is really tough but any team led by Josh Allen has a chance. He proved that tonight.

After a tough loss on Monday, the Buffalo Bills have a short week to prepare for the defending Super Bowl champions. Buffalo is undefeated against the NFC this season and Tampa Bay hasn’t lost a game yet against an AFC team.