Honors keep rolling in for the cast and crew of Harlequin Productions, the student theatre troupe at Cayuga Community College who just completed their first production since the start of the COVID-19 pandemic.

After earning accolades from the Theatre Association of New York State (TANYS) for their October performances of “A 5 Pack of Frivolity,” Harlequin Productions starred at the association’s fall festival on November 20. The association recognized the entire production with one award and singled out several students for acting honors.

Harlequin Productions Director Bob Frame credited the cast and crew for making “A 5 Pack of Frivolity” a success.

“The work that everyone did to make the fall performances a success was really remarkable. We had an entirely new cast who was tasked with learning the lines and nuances of different roles in different plays, and they excelled,” said Frame. “The performances and production at the festival were outstanding, and I was glad to see our students were recognized by the adjudicators.”

Comprised of five comedic one-act plays, “A 5 Pack of Frivolity” captured the eccentric ways people respond to unexpected situations. Based on their October performances, two of the one-act plays, “The Stand-In” and “Tough Cookies,” were selected for performances at the TANYS fall festival.

The cast and crew excelled at the festival. The performance of “The Stand-In” was named the second-best short production at the festival, and students Grace Wiseman and Dylan Bianco received People’s Choice acting awards.

Wiseman also received one of only three Outstanding Performance Awards issued at the festival.

An Auburn High School graduate who is majoring in Liberal Arts and Sciences: Humanities and Social Sciences, Wiseman has acted since she was 10 years old. “A 5 Pack of Frivolity” was her first performance with Harlequin Productions, and she described that her role in “The Stand-In” was a unique experience for her since she was the only character visible onstage.

“That was certainly not something I’ve had to do before, act onstage when I’m the only one the audience can fully see for the entire play,” she said. “I really enjoyed this performance, and it’s flattering to receive an award and be a part of a cast that received an ensemble award for all our work.”

Prior to the fall festival, TANYS adjudicators recognized the entire cast with an ensemble acting award, Frame with a sound design award, and Wiseman with an individual acting honor.

The two plays performed by Harlequin Productions at the TANYS festival were written by Brett Hursey. “The Stand-In” features an actress enduring a difficult director and histrionic sock puppet during an audition, while “Tough Cookies” shows a date that goes terribly wrong during dessert.

Frame also directed “Antigone and Letters to Soldiers Lost,” a production by the Auburn Players which was named Best Long Production at the festival. 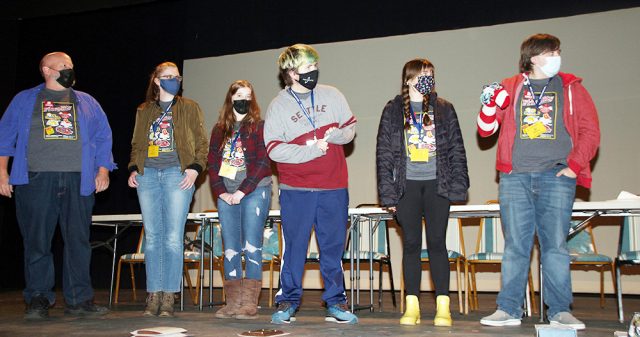