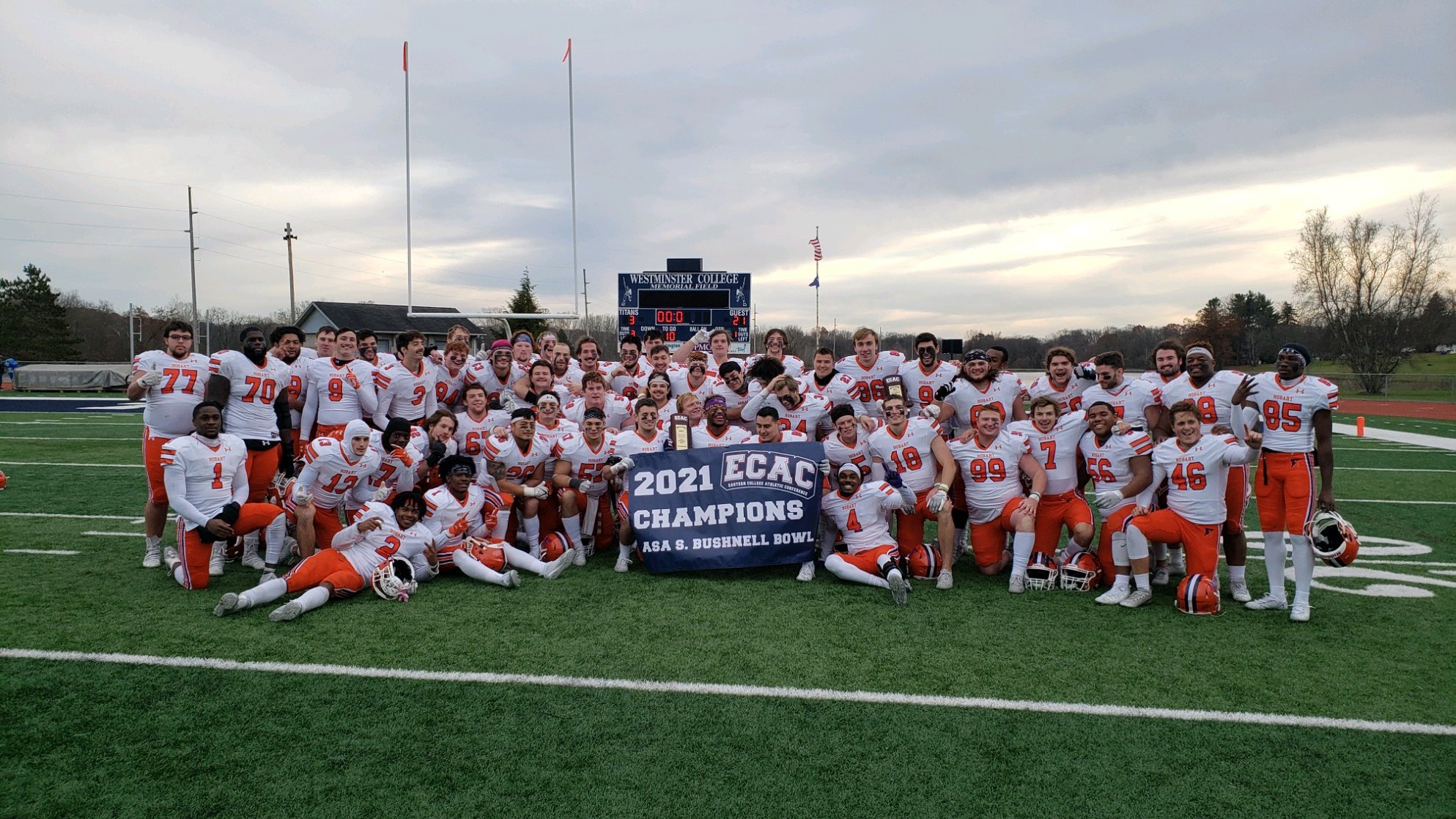 The Hobart College football team ended its 2021 season on a high note, defeating Westminster (PA) College 21-3 in the ECAC Asa S. Bushnell Bowl this afternoon. Defensive back Blake Hansen was named the Bowl’s MVP after leading all tacklers and scoring a touchdown.

The Statesmen (9-2) held the Titans (8-3) to their lowest scoring total of the season and just 245 yards of offense. Only No. 3 Mount Union held Westminster to fewer yards (151).

Hansen led the defensive charge with a career-high 12 tackles and a pass breakup. He scored his touchdown on special teams, blocking a first quarter punt and recovering it for a touchdown and a 14-0 Hobart lead.

Running back Tim Denham Jr. rushed for 90 yards, leading the Statesmen to 187 yards on the ground. The Titans came into the game fifth in the nation against the run, allowing just 61.3 yards rushing per game. Only the Purple Raiders (208 yds) ran for more against Westminster this season.

The Hobart defense set the tone early, stopping the Titans on the game’s opening drive, just across midfield. Westminster tried a fake punt on fourth and 9, but linebacker Emmett Forde intercepted Jason Hall’s pass. The Statesmen went three and out on their first possession and then forced a three and out.

The Statesmen defense forced another three and out and this time the rush got to Hall before he could get his punt away. Hansen blocked the kick and was credited with a 16-yard return for a touchdown. DiGregorio added the extra point for a 14-0 lead.

Westminster moved the chains with a 12-yard completion from quarterback Cole Konieczka to J. Washington and on a 28-yard run by Vincent Giles, but the drive stalled out and the home team had to settle for a 29-yard field goal by Joshua Byers.

The second and third quarters belonged to the defenses. Westminster had the best scoring chances, but missed out on any points due to fumbles. In the second quarter, the Titans faced a third and 3 from the Hobart 11. Konieczka completed a pass to Denny Dennison for a 10-yard gain, but linebacker CJ Calero forced a fumble at the one and defensive back Cal Sullivan recovered the ball in the end zone for a touchback, preserving Hobart’s 14-3 lead going into halftime.

Westminster worked its way into the red zone once more in the third quarter. On a third and 13 from the Hobart 17, Konieczka took off for a 6-yard gain, but linebacker Bryan Aguilar knocked the ball out and defensive back Jay McCoy recovered it at the 9.

Hobart put the game away with 6:03 remaining as Denham capped a six-play, 42-yard drive with a 6-yard run up the gut on a direct snap. It was his 14th touchdown of the season. DiGregorio added the extra point. He finished the season 41-of-42 (.976) for the fourth highest PAT success rate in a season by a Statesman.