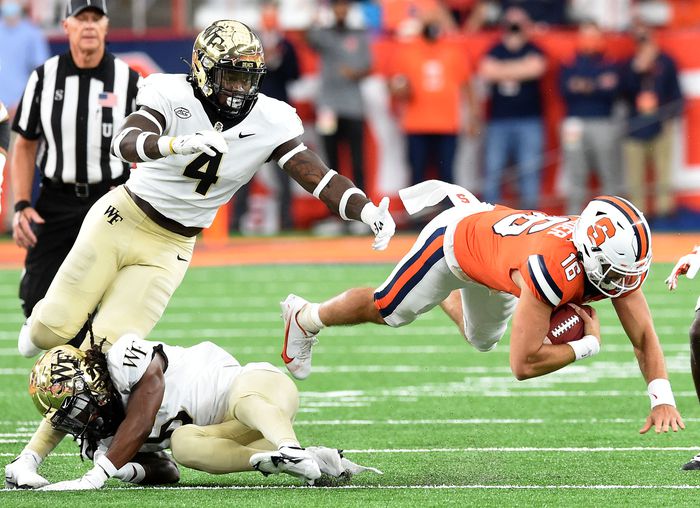 The Syracuse Orange football team certainly made things interesting on Saturday, but fell to the No. 19 Wake Forest Demon Deacons in overtime, 40-37 at the Carrier Dome.

Sean Tucker is over 100 yards rushing for the 4th straight game, tied for the 2nd longest streak in program history (5 – Curtis Brinkley, 2008). pic.twitter.com/u82VYUv8nB

Syracuse gets its first shot at a ranked opponent when it hosts No. 19 Wake Forest on Saturday in the Carrier Dome. Kickoff is set for 3:30 p.m. The Demon Deacons enter the game as one of 17 unbeaten FBS teams in the nation.

Wake Forest held on for a 37-34 win against Louisville on Saturday to improve its record to at 5-0, bringing Wake to the Dome with a perfect record. Since 2017, the Deacs are tied for the second-most wins in the conference, trailing just Clemson.

Clawson and Syracuse head coach Dino Babers are no strangers as both served as head coaches at Bowling Green. The pair have built their programs around the philosophy that the team is a family.

“Coach Clawson and I go way back,” Babers said. “I followed him at BGSU. He’s an excellent coach. They’re a close family over there. They play well together. They care about each other. I’m happy for their success. I hope they don’t have a lot of success coming up here to Syracuse, but I’m really happy for his success. He’s one of the good guys in college football.”

Syracuse will face a veteran team that features 20 players who started a season ago, and several of them fall into the ‘super senior’ category.

“I think the biggest thing between his team and other teams is he’s got super seniors all over the board. I was going back and watching tape, and I won’t tell you how far back, but they’ve got as many super seniors – a lot more super seniors than what people think. And he has a very, very veteran group that has been running the exact same system for a long, long period of time.”

One of those returners is quarterback Sam Hartman, who was named to the Davey O’Brien Award Great 8, which puts him up for national quarterback of the week adds him to the midseason watch list. Hartman ranks sixth in the ACC in total offense, averaging 293.5 yards per game. Justice Ellison, this week’s ACC Rookie of the Week, and Christian Beal-Smith lead the Demon Deacons’ rushing attack, which averages 184.5 yards per game.

The Orange defense continues to rank among the best in the nation. The unit leads the ACC and ranks 11th in the nation, allowing 284.6 yards per game. Individually, sophomore linebacker Mikel Jones is ninth nationally in solo tackles (6.2), while senior defensive lineman Cody Roscoe ranks ninth in tackles for loss (1.6) and 10th in sacks (1.10).

Sophomore quarterback Garrett Shrader and freshman running back Sean Tucker supplied all of the rushing yards against Florida State. Each rushed for more than 100 yards and combined for 239. It marked the first time in at least 40 years that the Orange have had only two players record a rushing attempt. Syracuse is averaging 220.6 yards per game on the ground, which ranks second in the ACC and 21st in the nation.

Our captains this week to lead us back into the Loud House vs. Wake: pic.twitter.com/PjHIhiY0pL

Big one in Our House this weekend pic.twitter.com/wmZd9a0OxJ