Pruett’s term was merely reaching the halfway point when he decided that, for many reasons, he would not continue forward.

“The commonly underproductive and often hostile working environment in Council creates an unaccepted level of disappointment and anxiety for those who truly strive for civic achievement, and I am one,” Pruett continues. “Now that more than one physician is advising that I diminish stress in my life or suffer consequences, I am compelled to leave office. Feeling as I do, without hope or expectation for the possibility of truly meaningful accomplishment, it would be less honorable to remain in office than to depart, and at happiness and health cost that is unacceptable personally.”

Geneva City Council’s struggles over the last two years have been well-documented.

“I Hope whomever takes my seat can be more effective, because I worry for the future of our fair city,” Pruett continued in his letter. “However, until fresh, outside influence can be brought in to government, I suspect the status quo will prevail. The city has been declining for decades, and only fools argue otherwise. Presently in government, I can think of no executive manager who has executive business management or multi-departmental budget experience. Way too much in my Council experience has been personality versus issues focused at all levels. Fresh thinking could benefit the city and its citizens.”

Pruett concludes his letter noting that he would remain available to assist with the transition- and wishes Geneva the best.

The letter was initially sought by FingerLakes1.com after the Finger Lakes Times reported components of it after Pruett’s intensions became clear and public. Mayor Valentino said via email that he would not release the letter to FingerLakes1.com without Councilor Pruett’s go-ahead. While FingerLakes1.com reached out to Pruett for the letter, a FOIL request was filed with the City seeking the letter as a matter of transparency.

On Wednesday, August 25, 2021 – just four days before the conclusion of Pruett’s service – the letter was released. You can read it in its entirety below. 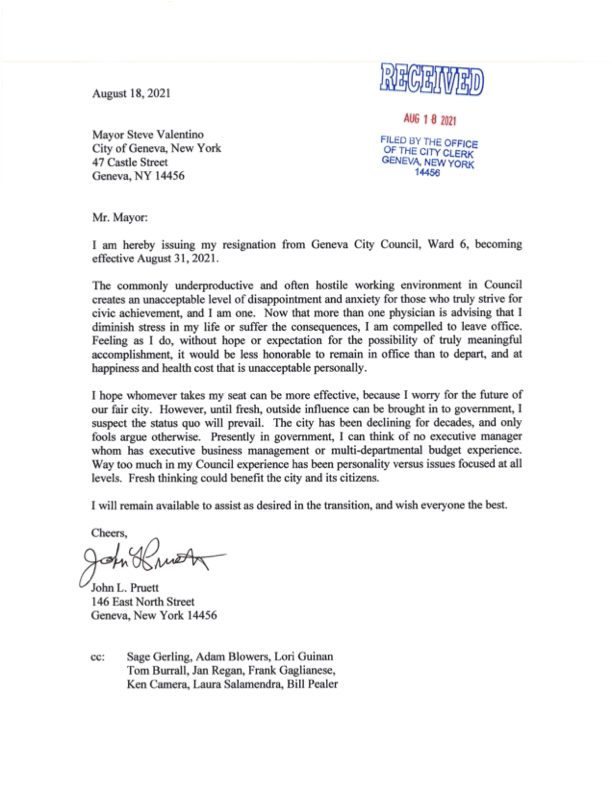 18 mins ago
Millions of Americans could be eligible for stimulus payments through their state’s homeowner assistance fund. The HAF program is a ... MORE

29 mins ago
Thousands of Americans in need of energy assistance will soon see a credit for their energy bill worth $500 in ... MORE

30 mins ago
The SNAP started giving out extra money called emergency allotments during the pandemic. Thirteen states will continue to send the ... MORE

45 mins ago
SSI checks will be direct deposited in less than a week. Right now, the average monthly benefit is $621. Stimulus ... MORE

1 hour ago
Thousands of Americans in Oregon can soon expect stimulus payments worth $600 as the state’s One-Time Assistance payment. 236,000 residents ... MORE

2 hours ago
A new proposal from the Minnesota governor would provide direct payments to residents as gas relief. More than 2 million ... MORE