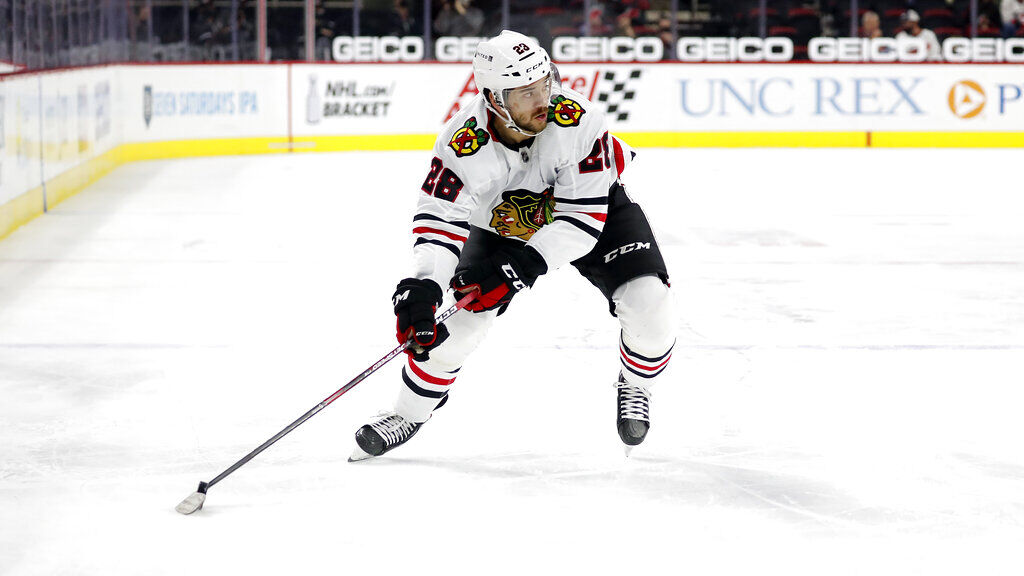 Signing with the Sabres was almost a no-brainer for Vinnie Hinostroza. One phone call from head coach Don Granato helped him make the decision to join the team.

“…we got on the phone we talked about 40 minutes and the way the team is going, the way they want to play, I think I fit perfectly there… hard-working, relentless with some speed,” Hinostroza said.

The new Sabres forward has a history with Granato. Hinostroza played for him in Chicago in 2017-18 when Granato was an assistant coach with the Blackhawks. That history and the chance to play for him again also factored into his decision.

“…I think with him as a head coach you’re always going to have that transparency where you know what he wants from you and if you’re not doing something right he’s going to tell you,”Hinostroza said. “There’s never going to be that gray area where you are wondering what did I not do or what could I do better. He’s always going to tell you and try to help you be the best player you can because ultimately if everyone’s the best player they can be the team is going to have success.”

“[Coming] out of training camp [I] didn’t have many opportunities and kind of just kept working hard, waiting for that opportunities to come and I think I played like nine games and when I’d play I’d play four or five minutes so it was like no opportunity really there…” Hinostroza said.

Then he was traded to Chicago where he found new life in the second half of the season. In 17 games with the Blackhawks, he scored four goals with eight assists.

“…going to Chicago I had a bit more opportunity and was just able to go out there play and have fun,” he said. “Really brought back the fun in hockey and I’m looking to just keep going off that.”

He comes to Buffalo as a 27-year-old player, one of the “older” guys on the team. He said himself he’s not a “young guy” but also not an “old guy.” Still, he hopes some of the lessons he’s learned in the league can help those younger guys already on the roster.

“I think having ups and downs in my career that is something that is nice to have with all these young guys in Buffalo so I’m going to look to try to have a secondary leader ship role and just help out as much as I can and be there for these guys to because you were always that young guy at one point and it’s kind of tough when people are not on your side,” Hinostroza said.

He’s also excited to join the city of Buffalo and experience the Sabres fanbase on the home side for once.

“Every time I played in Buffalo it’s been crazy,” Hinostroza said. “Super excited for the fans there and I’ve been to a Buffalo Bills game. Josh Allen is always my fantasy QB so super pumped and I know how passionate the city is so I think that’s going to be, going from no fans to that it’s going to be something that is going to be really really fun.”

Even though he hasn’t experienced Granato as a head coach, he has an idea of the type of guy he’ll be playing for this season.

“He’s going to tell you what you need to do and there’s always a transparency and that’s something we talked about because going through the stuff I did in Florida I kind of didn’t know what was going on and try to get some answers and never heard it so when you are not playing your best you always want a coach that is going to tell you how to get back out there, get in the positions that you want to be in and just talking to him that sounds like something he’s willing to do with every player and that’s some thing that a team needs in today’s NHL and I think that’s going to help the team be that much better.”