Today, miniature versions of an upcoming new statue project for Seneca Falls, titled Ripples of Change, was unveiled for public viewing at the Seneca Falls Heritage and Tourism Center at 89 Fall Street in downtown Seneca Falls.

The Women’s Suffrage Centennial Commission (WSCC), an organization created by Congress to commemorate 100 years of the 19th Amendment and to honor the history of women’s fight for the vote, partnered with the Town of Seneca Falls and the Seneca Falls Development Corp (SFDC) for a one-of-a-kind commemorative centennial statue that will bring to life the earliest chapters in the story of women’s fight for the vote.

“It’s been an amazing journey since the concept was first introduced to us in early 2020,” shared Joell Murney-Karsten, SFDC Board Chair, “and it was a pleasure to work with both the Commission and the Town of Seneca Falls to make this possible for our residents and visitors.”

Ripples of Change, designed by renowned sculptor Jane DeDecker, depicts four activists whose work spanned generations, including Laura Cornelius Kellogg, Harriet Tubman, Martha Coffin Wright, and Sojourner Truth. The Seneca Falls Development Corp has launched a website at http://ripplesofchange.live where visitors can get more information on the statue, the artist, and each of the women honored in the monument.

“It was an honor to work with the WSCC and Jane DeDecker to bring all the creatives together,” said Greg Zellers, SFDC Director, “and we’ll continue to update the website with photos and narratives as the statue’s site preparation continues and to share the stories behind the women represented and the artist’s inspiration.”

In September 2021, the Ripples of Change statue will be unveiled along East Bayard Street across from Generations Bank Headquarters and Café 19, near the When Anthony Met Stanton statue, which depicts Amelia Bloomer introducing suffragists Elizabeth Cady Stanton and Susan B. Anthony. Ripples of Change will eventually be moved to its permanent home in People’s Park, with the National Women’s Hall of Fame as the backdrop, once the park’s planned renovations and improvements are completed through the Downtown Revitalization Initiative.

“With the artist’s original Ripples of Change statuettes now on display at the Seneca Falls Heritage and Tourism Center, people can visit and see the incredible level of detail that went into each of the four statues,” said Mike Ferrara, Seneca Falls Town Supervisor, “it will prove to be a wonderful new addition to our town for generations to enjoy.” 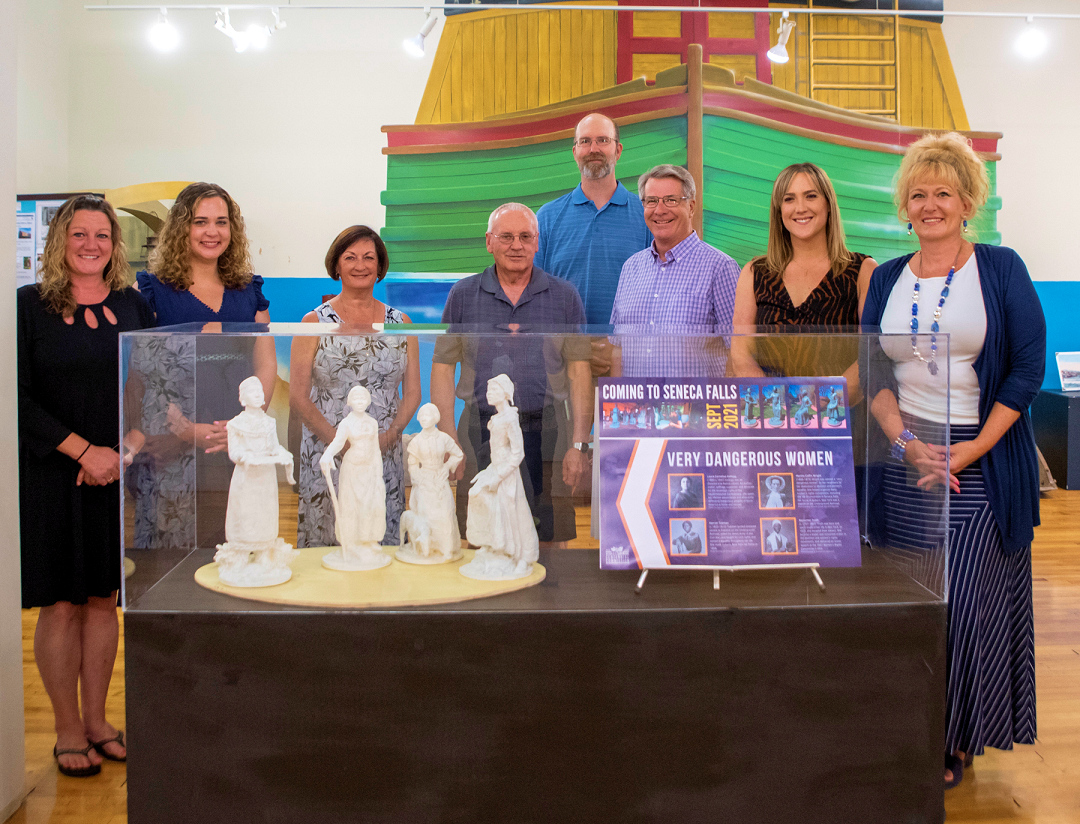 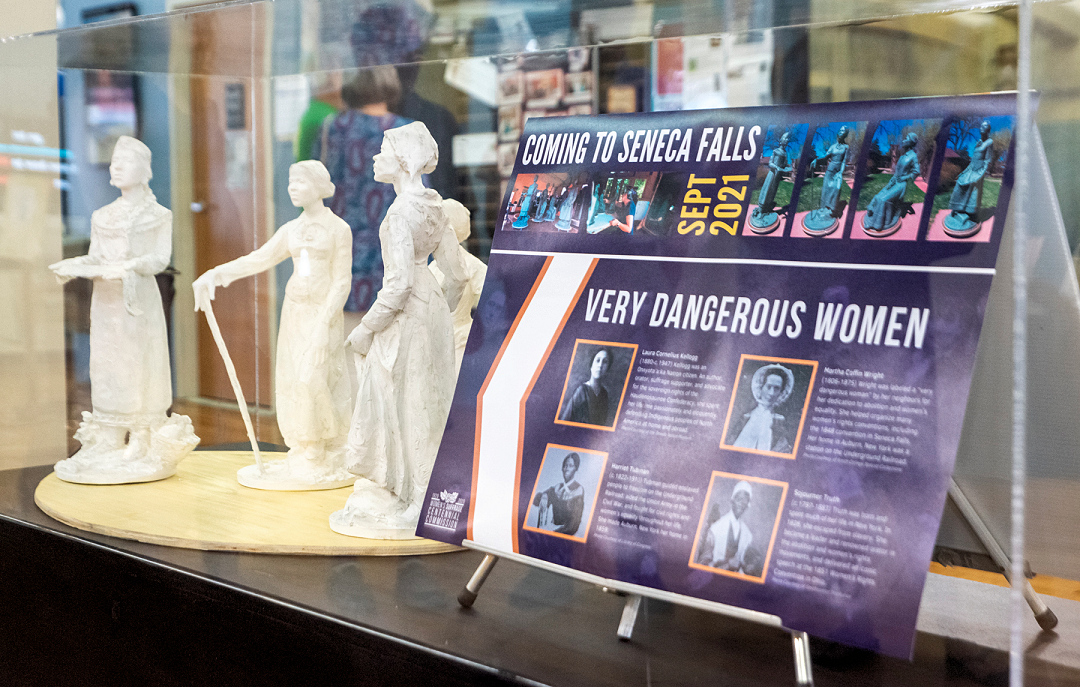 The full exhibit is available for public viewing at the Seneca Falls Heritage and Tourism Center, located at 89 Fall Street in downtown Seneca Falls. 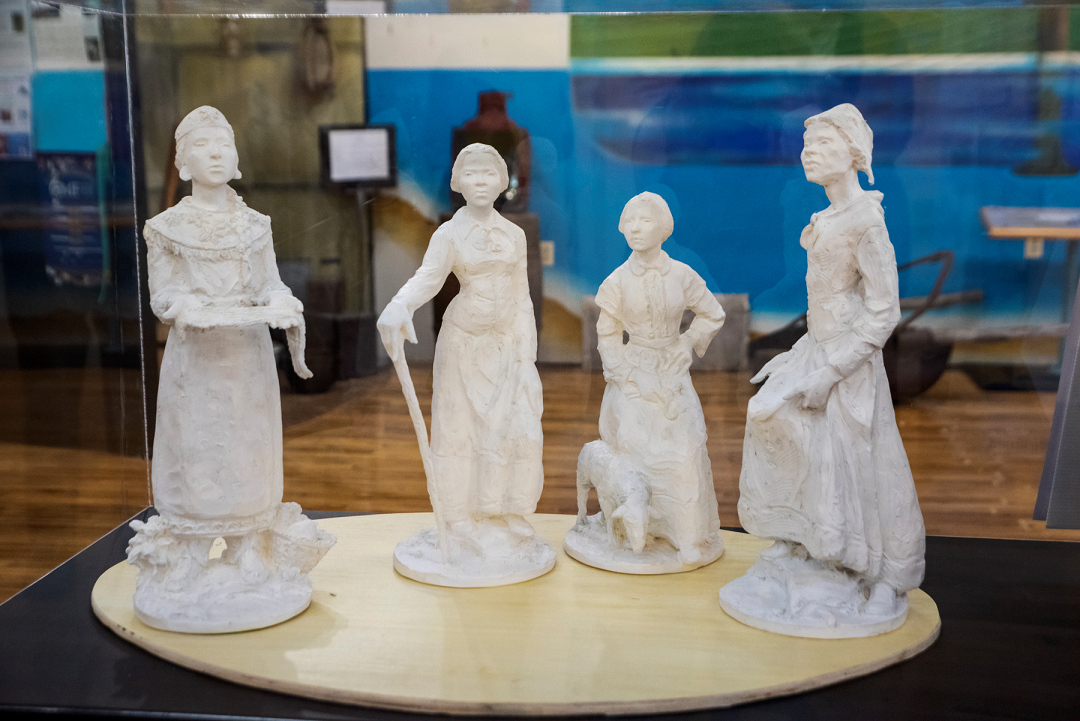 The artist’s original statuettes are miniature versions of the full size statues that will approach nearly eight feet in height once placed.