New York State’s Historic Preservation Office is siding with the Seneca Nation in their ongoing struggle to prevent the development of an expansive solar farm upon historical Indigenous lands as a part of Governor Andrew Cuomo’s ambitious climate change agenda.

The division’s archaeology unit aims at identifying and protecting historic resources that are under environmental review and offers guidance to preserve sites of significance like the former Canawaugus territory.

Although the state’s letter has been in circulation over almost a month, it still hasn’t been uploaded to the Article 10 Public Service Commission website, which tracks the Horseshoe Solar Energy project’s public documents, comments and correspondences between stakeholders.

“The OPRHP’s preference is for the avoidance and protection of cultural resources and the below comments reflect this philosophy,” Herter wrote in early March.

Upon reviewing findings of an end-of-fieldwork summary from a Phase IB archeological survey that was led by Panamerican Consultants, which surveyed a few parcels of property, the state’s historic preservation office is offering new guidances to the out-of-state developers Invenergy: a Chicago-based company.

Invenergy had been contracted by the New York Energy Research and Development Authority in 2019 to create a massive solar farm stretching across more than a 1,000-acres of land within the counties of Monroe and Livingston.

As for the former Canawaugus reservation, which is technically no longer in the possession of the Seneca Nation, the state advises that Invenergy’s developers should “avoid all impacts” to that specific location by eliminating portions of the proposed Horseshoe Solar Facility Project that overlaps upon the site’s historical boundaries. 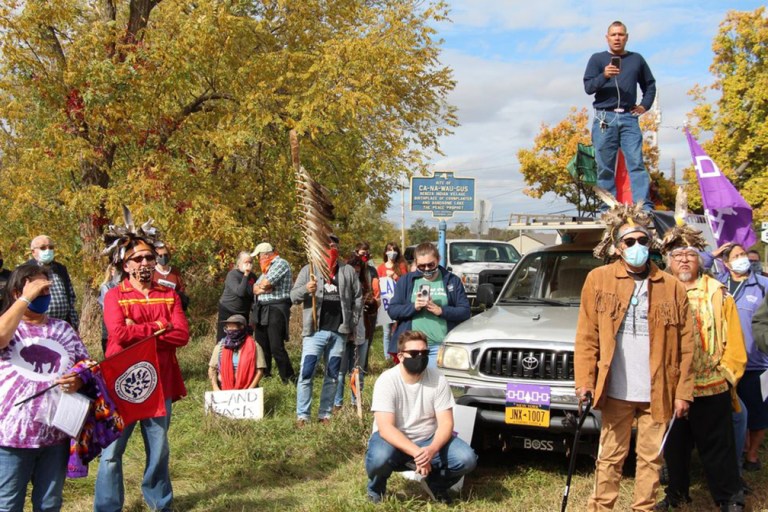 Although no archaeological sites were identified as a part of the Phase IB survey, Herter believes that Canawaugus is eligible to join the respective state and even National Register of Historic Places as “a property of cultural and religious significance.”

“If these parcels are not avoided by the proposed Project [Horseshoe Solar], the OPRHP will request mitigation measures,” Herter elaborated.

The OPRHP names five specific parcel designations including one along Golah Road where another archeological study had been recently conducted.

“We are the ones in the trenches arguing over sensitive cultural matters that very few truly understand.”

Dr. Joe Stahlman, director of the Seneca Indian National Museum, is “happy with most of the SHPO’s recent letter on Horseshoe.” Their recommendations were “very supportive” of the Nation’s requests, particularly when it comes to the Canawaugus site.

“Although they did not support every recommendation, we feel we can reach a compromise on the remaining parcels,” Stahlman told FingerLakes1.com.

When expansive sustainable energy projects are developed in New York, Stahlman insists that the “well-being of our citizens” must be taken into account as well. In the case of Invenergy, however, he believes that the Chicago-based company isn’t worried about impacting the surrounding communities — including the Seneca and Tonawanda peoples. 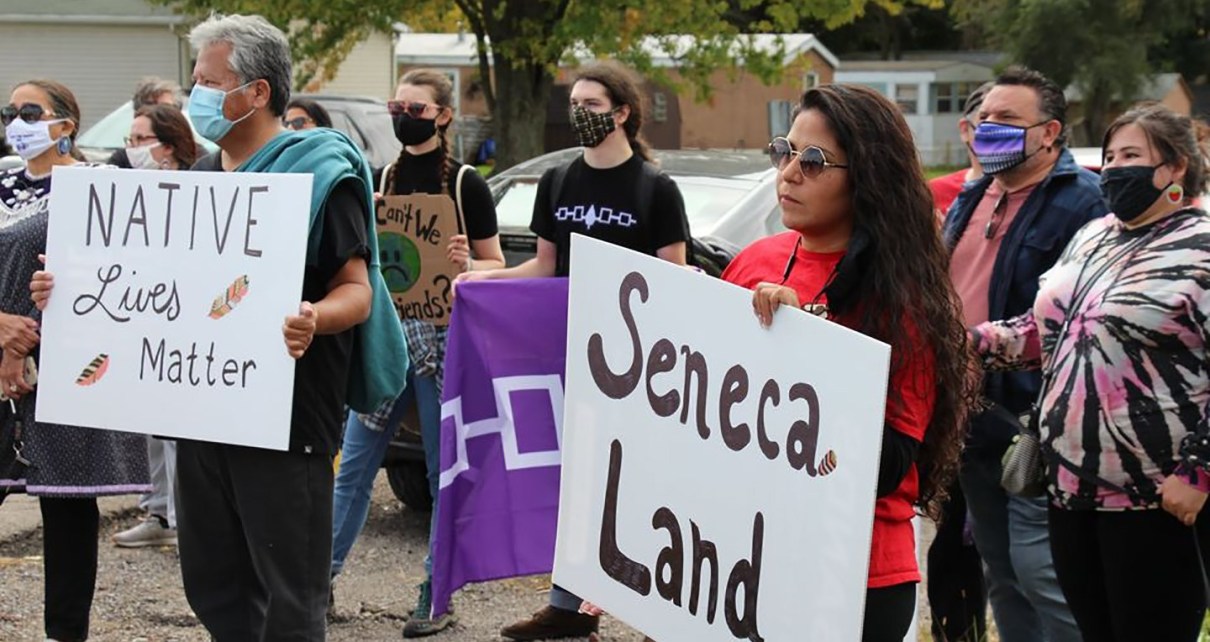 Indigenous peoples aren’t the only ones who are opposed to the Horseshoe Solar Energy project. The Residents United to Save our Hometown [RUSH] are disgruntled non-Indigenous demonstrators, who are equally opposed to the massive solar power plant project. Courtesy: Seneca Media & Communications Center.

“They are outsiders coming into the state and trying to get what they want without having to directly deal with the mess they created… Invenergy gets to wait on the sidelines until it’s over, build their solar farm, and leave,” Stahlman said.

Conversations of sensitive nature are occurring, but only between the state and Nation, long after the original plan had been approved, too.

“We are the ones in the trenches arguing over sensitive cultural matters that very few truly understand,” he revealed.

Although Kate Millar, the Horseshoe Solar project developer, has continually claimed that their company has kept the Keeper of Western Door notified about their arrangements in Upstate New York, “they would have provided the Nation with a courtesy call at the onset of this endeavor,” Stahlman claimed.

“We were only notified of the immensity of the project when local community members in the area reached out to us,” he later elaborated.

Upon reviewing records through the Public Service Commission’s website, the global sustainable energy solutions company never identified the Seneca Nation as stakeholders in their initial or revised public involvement program reports. Even their most recent report from Feb. 2019 reveals that there’s no recognition of the Seneca Nation either.

However, Millar’s team has made “several major project modifications” even prior to Herter’s letter, including the removal of more than 70-acres from the site.

In accordance with the state’s advisories from Herter, “Horseshoe has committed to further avoidance measures including the removal of over 100-acres from the project,” according to Millar.

“A parcel on Golah Road in Rush, NY, where the survey identified a dense concentration of artifacts has been removed from the solar layout entirely,” Millar told FingerLakes1.com.

Millar believed that her team “went to unprecedented lengths in our survey, research and proactive avoidance and monitoring measures” to alleviate concerns over ground disturbances that were brought forth by the Nations as a part of the Phase II testing.

This led to Invenergy trying to mitigate those concerns in an effort to “ensure Phase IB testing was thorough,” allowing for the Ithaca-based operation to argue for an end to any further archeological surveys or testings.

“It is our understanding that the Phase IB EOF report – combined with these additional avoidance commitments in accordance with your recommendations – satisfy our Phase IB study requirements and eliminate the need for a Phase II/III study or other further archeological testing,” Millar wrote in a letter responding back to Herter on Mar. 4.

As of Tuesday, Mar. 23, the letter still hasn’t been posted on the state’s Public Service Commission project website, causing Stahlman to hark back on the longstanding transparency issues that have been apparent at the state level between the Nations and New York State.

Stahlman ended, asking: “We have had to demand answers, designs, and results from Invenergy, and they always reply with the bare minimum. Where’s the transparency? Where is the cooperation? Where is the respect for Seneca ancestors?”